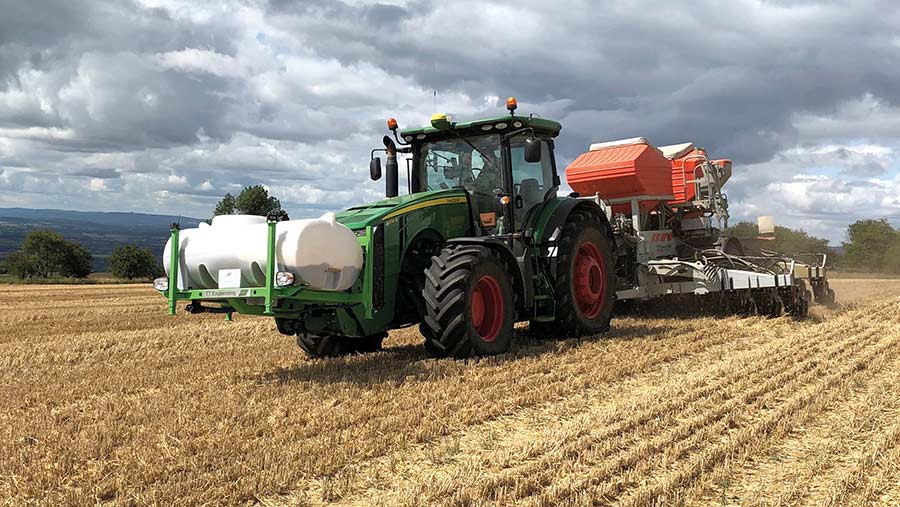 Carbon accounting is one of the measures Overbury Farms is using to gauge the success of the major agronomic changes it has made over the past decade.

The move to a more regenerative approach to farming was made primarily for soil health reasons, acknowledges Jake Freestone, farm manager for the 1,565ha Cotswold farm on the Worcestershire/Gloucestershire border. “We have to be economically viable first and foremost, but the switch to cover crops, no-till, etcetera, was about improving the farmland.”

See also: How to promote wildlife and have a profitable arable farm 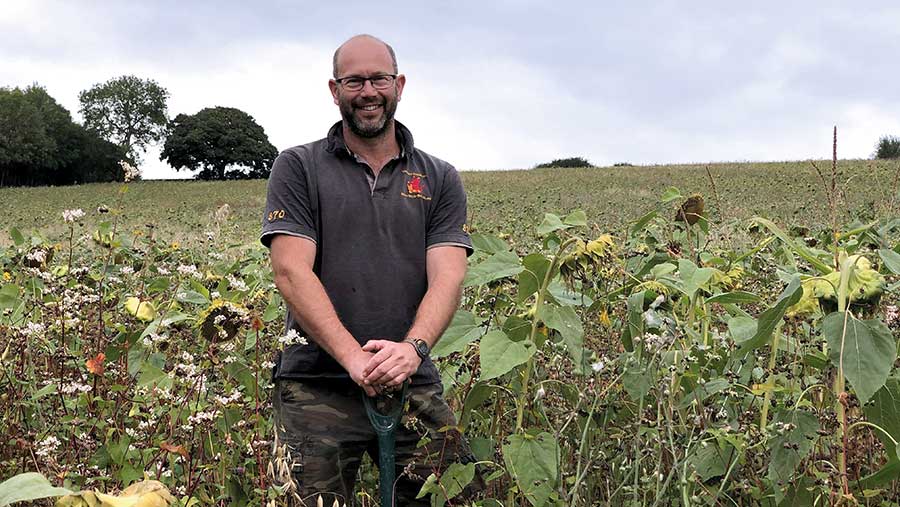 His interest in carbon harks back to 10 years ago, when he started carbon accounting for the Sainsbury’s lamb development group.

“With carbon, you can exchange that for a pound sign. If you’re reducing your emissions you will be saving money, but the trick is not to compromise output.”

Comparing systems is difficult as the whole system usually changes, he says. “When comparing year-on-year, you also have the influence of weather that can override any management change.”

Instead of comparing the whole farm, Mr Freestone has tracked and modelled the impact of change in approach on just one field using the Cool Farm Tool, with the help of Cool Farm Alliance’s Richard Burkinshaw.

“While there have been other changes such as genetics and new chemistry, fundamentally, the biggest changes have been in the establishment system and how we’re managing the soil,” Mr Freestone says.

The baseline for the 14ha field was a crop of winter wheat in 2005, when the farm’s agronomy was based on typical agronomic practices, including using the plough.

“We took that field, as we had soil samples for organic matter going back to 2005, so we had a reference point of 1.1% using loss of ignition tests,” he explains.

In that year, the yield was 7.2t/ha, with the Cool Farm Tool estimating emissions at 31,085kg of carbon dioxide equivalent (CO2e) in greenhouse gases, or 307kg/t CO2e.

By 2010, the yield had increased through changes in conventional agronomy, including using extra urea fertiliser, to 8.7t/ha. While this increased total emissions, the extra yield reduced emissions to 295kg/t CO2e.

The big agronomic changes were made during the past 10 years, first with the introduction of cover crops every two to three years, quickly followed by the switch to a Cross Slot no-till drill. Finally, a muck-for-straw deal with a neighbour was introduced last year.

The combined effect of those changes using the farm average yield as a baseline has been dramatic – reducing carbon emissions by more than 50% to 15,627kg CO2e, equating to 133kg/t.

In total, the tool estimates a carbon credit of 24,000kg CO2e over the field, or 1,700kg CO2e/ha a year, from using the regenerative farming practices of cover cropping, no-till and manures, says Mr Burkinshaw.

Using those figures and the changes in organic matter from the soil tests, which by 2019 had risen to 2.98%, they’ve also been able to validate to some extent the Cool Farm Tool calculations, he adds.

“Research suggests the change in Overbury’s soil organic matter from the field tests is equivalent to 70t/ha of dry organic matter, or 5t/ha a year.

“Most of that gap is explained by the tool’s underlying methodology in being conservative, that it doesn’t give credit for the annual 7t/ha crop residue going back into the soil. So it suggests, if you use the tool to model carbon sequestration, you are on the safe side.

“And if those regenerative practices were rolled out across the globe, we could see some massive sequestration from atmospheric carbon,” he says.

What’s next for Overbury Farms?

Reducing the amount of synthetic nitrogen fertiliser being applied to crops and increasing the efficiency of what is used is top of Jake Freestone’s next-steps list.

“One thing the carbon audit has highlighted is the massive amount of carbon that goes into the manufacture and application of fertiliser.”

“The other thing we’re focusing on is applying microbiology. We’ve fitted fertiliser tanks on the front of the drill tractor, so we can put nitrogen and phosphorus-fixing microbes in with the seed as a drench to, hopefully, reduce nitrogen demand.”

He is also using fulvic acid and humate to increase the efficiency of the N he applies and to reduce its overall quantity.

“We’ve been working on that for the past two years. Last year, we reduced the total N amount by 20% partly because of the drought, but even in 2019 we cut our N totals by 10%.”

Mr Freestone adds that work needs to be explored more because N is a huge part of the carbon footprint, but it also drives yield, so there’s an interesting balance.

Ultimately, he hopes to produce milling wheat with 200kg N/ha compared with the 300kg N/ha historically, and the 240kg N/ha currently being used.

Could carbon become an income stream?

While Overbury Farms’ carbon auditing has, so far, been used mostly to ensure the farm’s sustainability plans are on track, Jake Freestone is hopeful he can use the data as another income stream in the future.

“I think there is an opportunity – as long it can be verified independently – to add another income stream to the farm by sequestering carbon for other people, on a crop-by-crop or field-by-field basis.”

One example he suggests is when planting a fallow field with a carbon-capturing crop, which is paid for by a multinational company and the change in soil carbon measured. “We get the benefit for soil health and they get the opportunity of using it as a sequestration or offsetting element.”

The details are not clear as yet, he admits, with the biggest hurdle around confidence in data accuracy for carbon markets. There is uncertainty and variability in the data, but improvements to deal with this and align with carbon schemes are already under way at Cool Farm Alliance, he says.

“In the meantime, even if carbon auditing does nothing else but raise awareness with other growers of the impact of certain practices, that’s a good thing – because it will help drive change.”