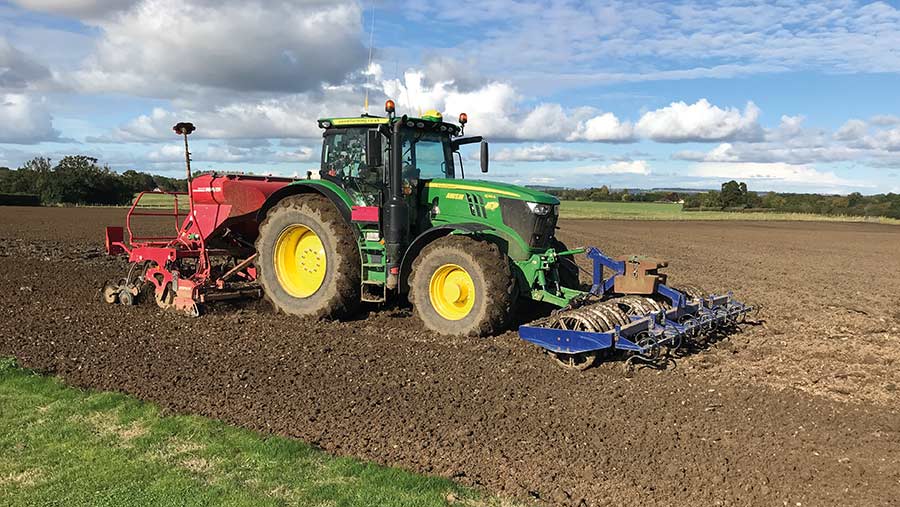 Farming 18 blocks of land spread over the local area can be a challenge, especially when trying to improve the health of soils that vary widely, from sand to heavy clay.

However, North Yorkshire farm manager Andrew Yarrow, of AWSM farming, is successfully managing the farm’s soils with the help of a new soil sampling service.

With a strong focus on promoting soil fertility, Mr Yarrow believes soils are the farm’s most valuable asset.

He previously only focused on the chemical properties of soil, managing just pH, nitrogen, phosphate and potassium levels across a range of soil types, from heavy clay to sand.

Now he uses a service provided by Agrovista which does a full chemical, physical and biological health analysis of soils and offers on-farm practical solutions to unlock the land’s potential. 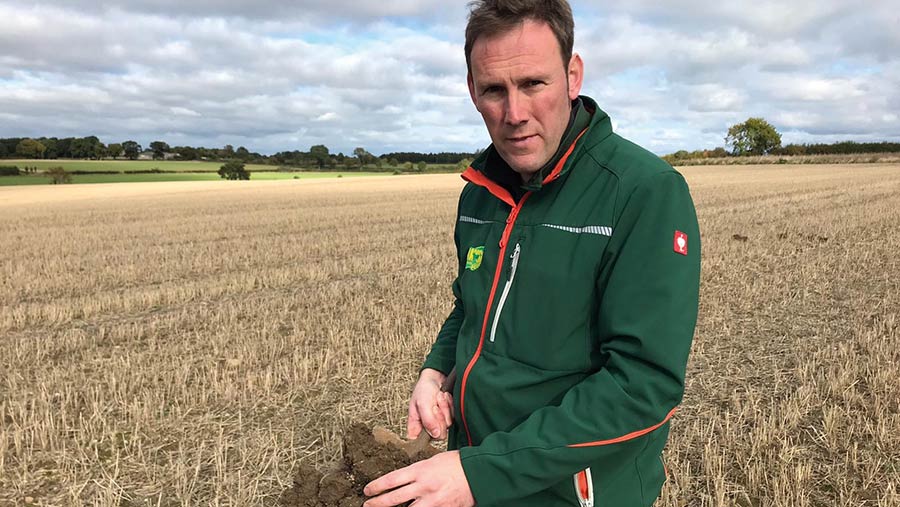 Now, he hopes to delve deeper into the science of soils and analyse other vital properties across 1,070ha of owned, rented and contract-farmed arable land he manages to optimise crop yield and quality.

“Our main aim is to create a more in-depth insight into our soils to get them working for us. Having had our soils scanned and GPS nutrient mapped previously, we plan to target applications of fertilisers, manures and digestate where they are needed, rather than the previous blanket treatment approach, as well as promoting soil biology,” he says.

As the farm is a large user of digestate, which is hauled from five large anaerobic digestion plants within the region, he hopes to use this information to target digestate applications more accurately to reach the optimum C:N ratio of 11:1.This will also prove beneficial when spreading manure from the farm’s 1,600 ewe flock and 2,250 bed-and-breakfast pigs.

Applying digestate significantly reduces C:N ratios and encourages bacterial activity in the soil, which is why Mr Yarrow spreads digestate on crops during the spring, reducing annual fertiliser use by 40%.

The high nutrient-value product is regularly analysed for quality, but by having more accurate soil nutrient records he can now ensure applications are targeted to the right areas, bringing potential cost savings and environmental benefits. 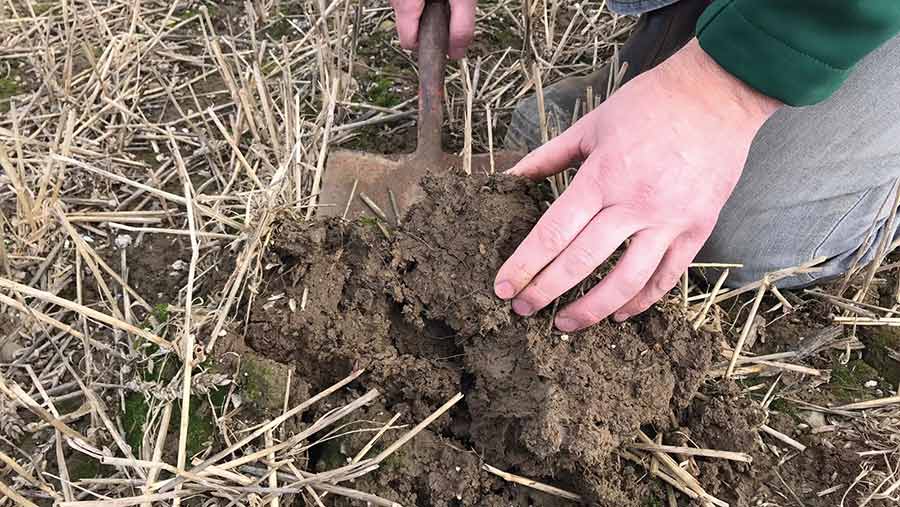 “It really is a great source of nutrients, and where applied we can visually see the response in crops. It is a valuable source of N,P,K and S which is released slowly to keep crops growing for a longer period. In future, we will be able to make applications more accurately and avoid blanket applications,” he says.

To further enhance soil microbial activity, the report recommended an application of the liquid carbon additive L-CBF Boost, which can be added with other spray mixes.

This acts as a food source for soil microbes, enhancing soil respiration rates and improving mineralisation, which in turn improves nutrient availability and the uptake efficiency of applied fertilisers. Alternatively, in scenarios where the C:N ratio is too low, the report suggests applications of straw-based farmyard manure or chopping and incorporating straw into the land.

Mr Johnson adds that the frequent use of farmyard manure on mixed farms is particularly good at keeping the C:N ratio in kilter.

Improving the physical properties of soil by optimising soil structure and workability through the identification and management of soil type as well as Ca:Mg ratios is another priority.

Farming near Richmond, the soils are naturally high in magnesium, so when test results from one heavy land block came back saying exactly this, there were no surprises. Liquid Gypsum was recommended and can be added to a glyphosate spray to help flocculate soils, which noticeably improved soil workability.

However, when one test flagged up higher-than-expected calcium levels at a ratio of 10:1 compared with the 7:1 optimum, he was particularly surprised. 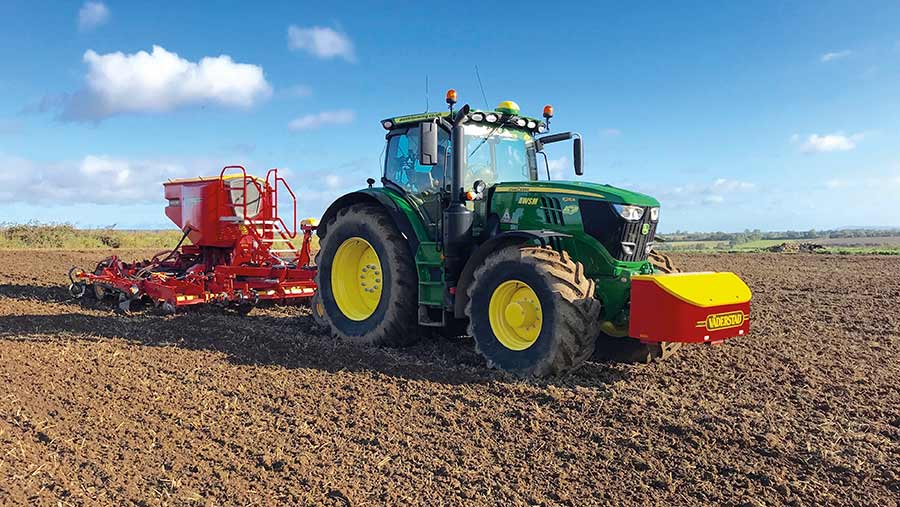 “We knew our land in this area was high in magnesium, but we also found some soils to be high in calcium. We now apply magnesium lime in places where we would not usually consider, meaning about three-quarters of lime we use is calcium and the remaining is­ magnesium,” he admits.

Mr Johnson points to the value in finding the right balance when it comes to the Ca:Mg ratio. Too high magnesium levels can cause soils to become tight and difficult to work, while too much calcium can lead to the over flocculation of soils and slumping after extreme weather, and reduce the availability of key nutrients such as phosphate and manganese.

The report also investigates a soil’s cation exchange capacity, where one land block measured a low 11.6meq/100g (below the 16-40meq/100g normal).

This indicated a soil with reduced nutrient holding capacity and a moderate leaching risk.

In this case, Mr Johnson highlights the importance of ensuring nutrient applications are timed to coincide with crop demand to feed the crop rather than the soil, and the use of foliar applications and seed dressings, where appropriate.

Although the new soil sampling method gives greater insight into other soil properties, it also helps to optimise essential chemical properties such as pH and soil nutrient levels.

“Working with soil pH is the foundation for optimal nutrient availability and biological activity so it’s vital this is the first step to consider when improving soils. With the ability to variably apply lime to a field, it is one of the first operations carried out after nutrient mapping,” says Mr Yarrow.

This is why he plans to continue to maintain/raise pH levels to 6.7 which is particularly important when taking on new land where soil history is limited, which makes going back to soil basics a priority.

What is the Agrovista Soil Health report?

“There are many soil tests which provide tests and figures, but we aim to provide the ‘so what’ to farmers. This is key, explaining how farmers can practically use all the information the report provides for the benefit of their soils and, ultimately, their bank balance,” he says.