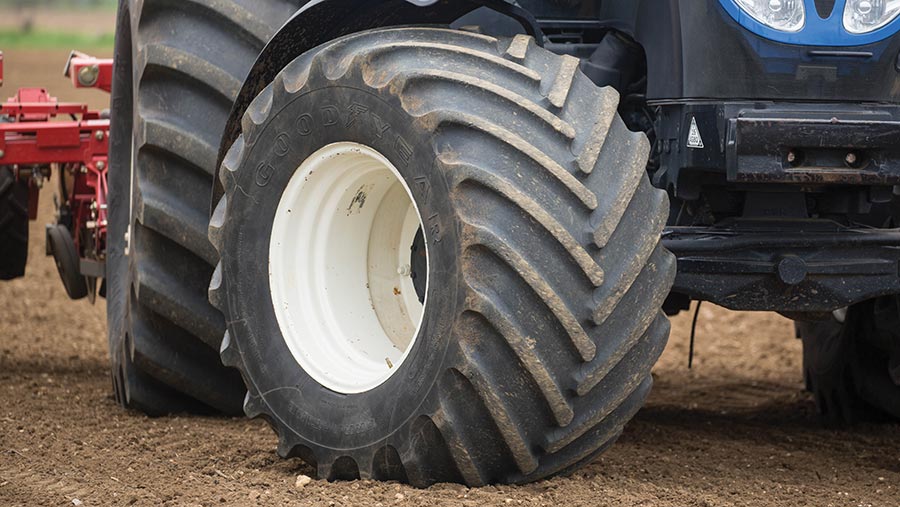 Compacted soils can typically yield 10-20% lower than healthy soils, which is why growers could benefit from a range of measures to cut compaction risks and avoid costly yield losses.

Mr Williams says that soil damage does not solely have an impact on the economics of a farm business, but can also have a negative effect on soil drainage and infiltration.

This is due to the development of horizontal layers of dense soil aggregates in the soil profile, which can lead to increased run-off, soil erosion and nutrient losses.

With surveys suggesting 40-60% of UK soils are in a “moderate condition” and 0-30% “severely degraded”, there is considerable scope for the improvement of our soils, he explains.

The majority of soil functions are driven by biological processes, underpinned by soil organic matter decomposition. Where appropriate, organic matter levels should be enhanced in order to build soil resilience to create naturally healthier soils.

This will have a positive impact on water relations, aggregation, structure, carbon store, nutrient cycling and soil biology.

Managing soil structure and avoiding degradation by building resilience is paramount. This can be achieved by optimising cultivation methods, tyre pressure and soil organic matter levels.

“Visual soil assessments are important for guiding management decisions by going out and digging holes to assess what soils need and what cultivation strategy is optimal,” he adds.

Growers should avoid too many cultivation passes, which can otherwise risk significant compaction deeper in the soil’s profile.

“Remember that 50-60cm is the limit for which metal can be used to relieve compaction. Structural damage below this depth can cause real issues,” he warns.

Soil compaction can be measured using a root penetrometer and understanding of bulk density.

Uncompacted soils have a bulk density measurement below 1.3g/cu cm. However, a reading of more than 1.6g limits root growth and a 1.8g reading will severely restrict root growth, causing issues for crop yields and soil health.

“Most agricultural rotations, in the absence of controlled traffic farming, traffic more than 70% of the field, where the first pass could cause 85-90% of compaction,” he reports.

These factors, all of which add expense to production systems, cost money to resolve and often occur at the same time, include:

Mr Purdy continues that compaction in the topsoil is dominated by tyre pressure, while vehicle axle load and weight affects compaction deeper down in the subsoil.

Tyre pressure is dependent on the load of the machine, speed and its application, but as rule of thumb Mr Purdy recommends keeping pressure below 10psi, if tyre technology allows.

When the load is increased, tyre pressure is upped in order to compensate for the load carrying capacity.

However, too high pressures can cause unnecessary soil compaction. Minimising pressure per unit area on the surface is especially important, given the large size of machinery within the industry, he says.

This can be achieved through the use of modern developments such as taller and wider tyres with IF and VF technologies, which can compensate for additional weight.

Such technologies can carry up to 40% more weight at identical pressures than standard radial tyres or carry the same weight at 40% lower pressure, minimising risks of soil damage while also benefiting tractor and fuel economy.

“Make choosing taller and wider tyres a priority, as this allows a greater load to be carried at a given pressure, which reduces compaction risks,” he says.

Mr Purdy also states that machinery should not carry more weight than required for the job, aiming to keep axle weight below six tonnes.

Furthermore, he recommends drivers ensure the correct 40-60% weight balance spread across the tractor, where 40% of weight is to be distributed at the front and 60% at the rear.

“Be careful where you put weight, as this can be damaging to both soil health and machines,” says Mr Purdy.

German tyre manufacturer Continental has recently invested in a new research and development facility in Portugal to develop tyres that help to offset the potential damage that heavy machines can cause.

This design has a single bead wire, which creates greater tension and uniformity in the tyre, offering more flexibility that provides the option for tyres to be run at lower pressures.

“VF tyres carry 40% more load than a standard tyre at the same pressure. Alternatively, in the field, the pressure of VF tyres can be lowered by 40% compared to standard tyres, even when carrying the same load,” says Mr Hutchins.

This spreads the weight of the vehicle over a larger surface area and reduces soil compaction.

The company also recently introduced a digital tyre-pressure checking sensor that monitors the pressure and temperature of tyres.

The system, named ContiPressureCheck, can be specified to new tyres or retrofitted, and provides the operator with information to prevent tyre-related issues, such as underinflation or overloading.

This helps to save fuel, increase mileage and minimise the risk of tyre failure and compaction. Cost of the system starts at less than £1,000.