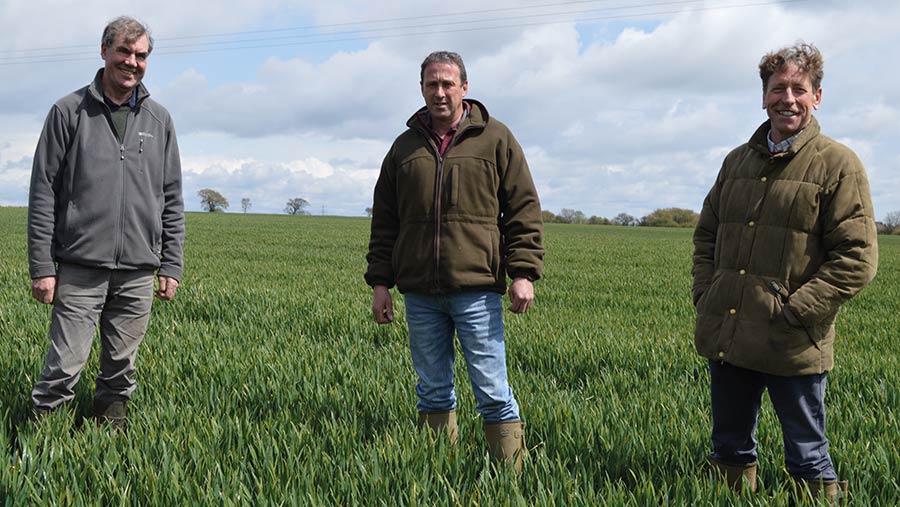 Improving soil health is key for one Norfolk farming estate as it looks to cut crop inputs and raise yields to prepare for a future without direct farm subsidies.

After three years of focusing on the farm’s light-to-medium sandy clay loams, fertiliser inputs are now falling, herbicide costs are set to come down and crop yields forecast to rise.

Owner Chris Allhusen is using long rotations, reduced cultivations and cover crops to improve his arable soils after he suspected that they were becoming degraded and blackgrass was flourishing.

With direct farm subsidies under the Basic Payment Scheme (BPS) being phased out in favour of less generous environmental schemes, he says that he needs a more resilient farming system to cope.

“We are investing in a different type of farming and the key will be the soil,” he says on his estate at Bradenham Hall Farms, just to the east of Swaffham.

See also: How a grower is preparing for ELMs as direct subsidy ends 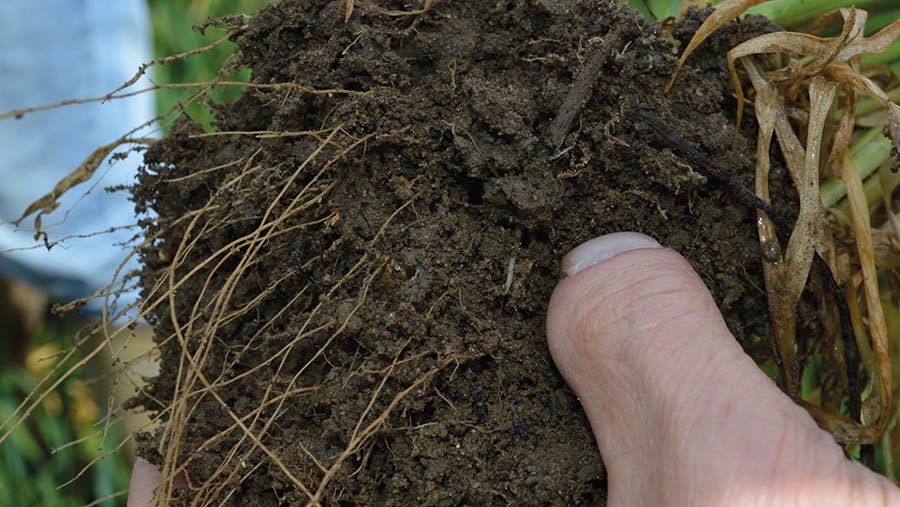 Soil health comes top of his list of priorities, and he is keen to future-proof his soils in preparation for the tougher times ahead.

“Improving the soil is a long-term process. We know we are doing the right thing as the soils are becoming more sponge-like and more alive,” he says.

A two-year spring cropping break was introduced into a largely winter cropping regime to counter blackgrass, which helped stretch the rotation and allow cover crops to be introduced, while soil cultivations were reduced.

“Widening the rotation has improved the soil structure and will allow us to grow higher yields while optimising inputs,” he adds.

Three year ago, Mr Allhusen got together with his farm manager and agronomist on the 950ha estate with the aim of getting on top of an increasing blackgrass burden and making his soils more resilient, in a six-year improvement plan.

He realised that simply ploughing in chopped straw was not good enough to improve soil organic matter levels, and he suspected his soils might be suffering from continuous arable cropping.

This came as direct BPS payments are set to be phased out by 2028 along with environmental Countryside Stewardship schemes, with both to be replaced by Environmental Land Management (ELM) schemes with their rollout set for 2024-27.

Plus 120ha of blackcurrants, land in environmental schemes and woods

The first step was to widen the farm’s rotation to six years from four, with a two-year double spring break of a spring cereal and then spring beans across the 565ha of arable land.

The move to more spring cropping over the past three years has seen blackgrass levels decline to more manageable levels, while the soils are easier to work.

The team also decided to cut the rotation of the farm’s 120ha of blackcurrants to 10-12 years from 16-25 years to help control perennial weeds and improve the quality of the berries, grown for Ribena.

When blackcurrants are finished they are flailed and the ground is rotavated, and then a following winter wheat crop gets a 2t/ha yield boost up to 11t/ha compared with following other crops such as oilseed rape. 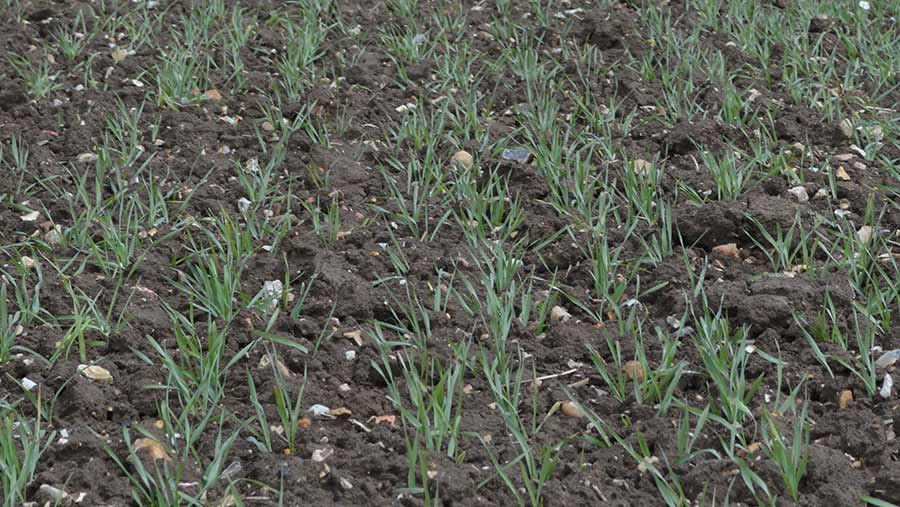 The farm has also moved to what Mr Allhusen describes as “appropriate tillage”, which means largely minimum tillage and minimal ploughing, both aimed at disturbing the soil less to allow better soil diversity.

The result is better drained fields through the winter, despite having just seen two of the wettest autumns in living memory.

All primary cultivations are conducted with a Fendt crawler to keep soil compaction to a minimum.

Farm manager David Pike is refining cultivations after all the cereal straw is baled and carted.

To prepare an autumn seed-bed, he uses a pass of a TopDown disc-tine-leveller-packer cultivator followed by a Simba Cultipress consisting of tines and press wheels.

Any chitted blackgrass plants are then treated with glyphosate herbicide to control the troublesome grassweed, and the field is then drilled.

“The ground is easier to work, there are more worms and no big lumps are brought to the surface as when the plough was used,” says Mr Pike.

Soil improvement has been aided by drainage, ditching and hedging work being stepped up on the farm – and there are more than 80 miles of hedges, enough to stretch from the farm to the M25 London orbital motorway.

The greater use of spring cropping has allowed cover crops to be strategically introduced, and agronomist Andrew Melton, from advisory group Frontier, chose a mix of deep-rooting fodder radish combined with the fine roots of black oats.

“We need roots at various depth within the soil profile over the winter months to ensure any excess winter rainfall is able to get to the field drains and reinvigorate the soil,” he says.

The regime for cover crop establishment is one pass of the TopDown cultivator after harvest and then the ground is drilled with a Vaderstad Rapid, with a seed cost of about £30-£35/ha.

Into the following year, a spring crop is direct-drilled with the Vaderstad into the cover crop which has been treated with glyphosate, meaning that all the cultivations for the spring crop are conducted in the autumn. 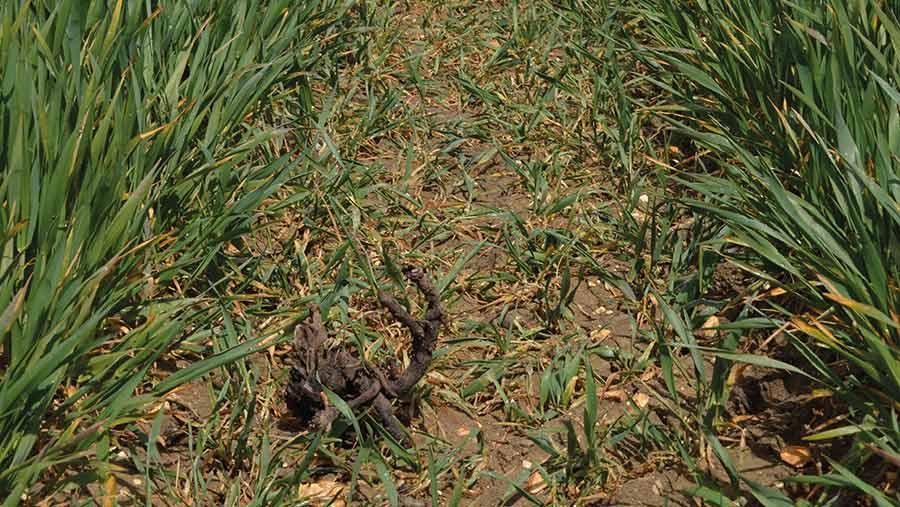 For the past three years, all cereal straw has been baled and carted to a neighbour’s pig unit. The manure comes back to the farm and is applied before oilseed rape, cover crops, and also used on the blackcurrants.

The farm’s soil organic matter was historically about 2.5-3.5%, but the soils are now more resilient, feel different and drain well, and this level is expected to rise.

“We would expect to see a change in the organic matter at the end of the six-year period, the key is we have halted the decline” says Mr Melton. 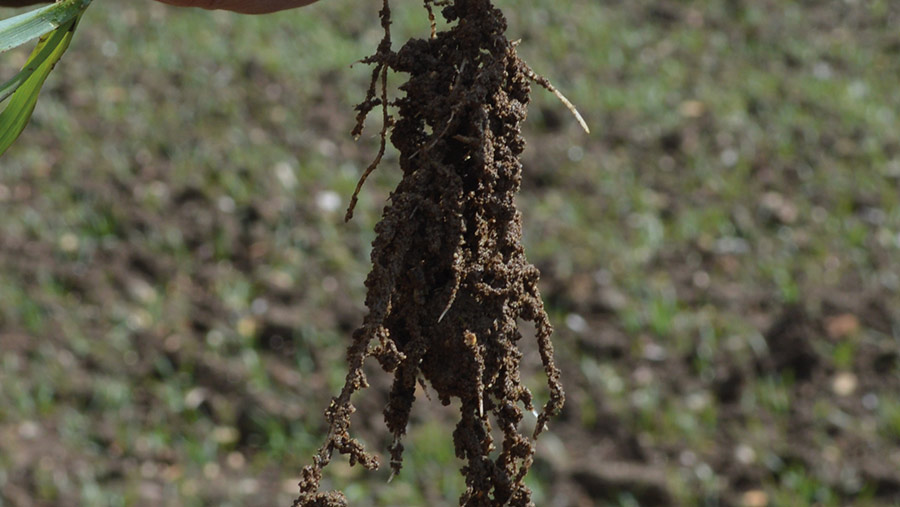 Gains from the farm’s changes made three years ago are already being seen. No phosphate or potash fertiliser is applied to crops where pig manure has gone on, and that means no fertiliser is used on the 100ha of oilseed rape at drilling.

Mr Melton estimates this fertiliser savings amounts to £40-£50/ha for the oilseed rape with the associated benefits to soil structure, although the financial benefit is offset somewhat by the cost of spreading the manure.

Historically, grassweed control in winter wheat has been based on a three-pronged approach – pre-emergence, peri-emergence and spring-applied contact herbicides – but as the benefits of the spring cropping feeds through, savings could be made.

Starting this autumn, Mr Melton is looking to miss out either the peri-emergence herbicide spray or the spring contact spray, and says this could save a further £40/ha.

Some of these savings could be reinvested into using more nitrogen fertiliser and Mr Melton says rates may go up to 250kg/ha from 220kg/ha on the feed wheats grown such as Gravity, Wolverine and Kerrin, along with the biscuit-making wheat variety Firefly.

“With the soils becoming more resilient and fertile, we would be looking for better wheat yields, in the region of 12.5t/ha,” he says.

Mr Melton also expects a better return from fungicides – presently averaging about £120/ha on the wheat – as soils improve and crops are healthier.

This season’s dry and cold spring led the farm to applying a T0 only where yellow rust was active.

On most of the wheats, a T1 mix of bixafen, fluopyram, epoxiconazole and folpet was used, and on the more disease-susceptible varieties the new SDHI-azole fluxapyroxad plus mefentrifluconazole (Revystar), and this is likely to be repeated at the flag-leaf T2 timing across all varieties given recent rains.

The farm is moving to grow more of the barley yellow dwarf virus-resistant wheat variety Wolverine with the aim of cutting insecticide sprays, especially as the area is a hot spot for the aphid-spread disease.

For this autumn, half the 200ha wheat area is set to be in Wolverine as Mr Pike points out, “Rusts are manageable, but BYDV is not.”

“We would expect yields to go up slowly, especially if we can drill winter wheat earlier in September rather than October as blackgrass pressures ease,” he says.