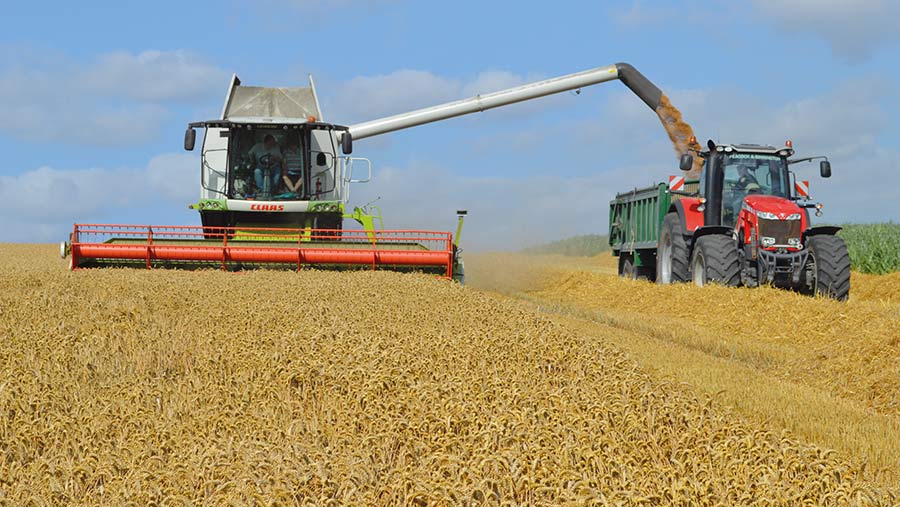 Lincolnshire Wolds grower Tim Lamyman swept the board at a top-yield competition with his best wheat yield of 15.6t/ha – even beating an entry from the world record holder in New Zealand.

Mr Lamyman took Gold, Silver and Bronze awards for cereals at the Yield Enhancement Network (YEN) competition even in a year when a dull summer took the edge off potentially sky-high yields.

He also won Gold by breaking the world record yield for winter barley, while top oat and spring barley yields came from Northern Ireland, and in the oilseed rape competition, Mark Stubbs managed to edge ahead of Mr Lamyman, his Lincolnshire neighbour.

Mr Lamyman’s success with his wheat crops came as his fungicide programme dealt with a late attack of septoria, initially prompted by a wet weather in May, and so he kept his wheat crops as green as possible up to harvest.

“Our wheat crops were greener for three weeks more than neighbouring crops, and were still cut at around the same time,” he said at a YEN winners announcement briefing on Wednesday.

The result was that from his feed wheat varieties grown, Colosseum yielded 15.6t/ha, Champion 15.2t/ha and Theodore 15.1t/ha, beating the 14.8t/ha from Eric and Maxine Watson of South Island, New Zealand, who currently hold the world wheat record yield of 17.4t/ha.

Meanwhile, two Scottish growers, Iain Learmonth from Aberdeenshire and Mark McCallum from Ross-shire, and Northern Ireland grower Allan Chambers, all showed yields above 100% of their calculated potential with yields of above 11t/ha.

In the ninth year of the YEN awards, organised by crop consultants Adas, there were 203 cereal entries and 43 oilseed rape growers. These came from the Netherlands, Ireland, Finland, Estonia, Denmark, Sweden, two from New Zealand, and the UK.

Roger Sylvester-Bradley, head of crop performance at Adas, said crops last season showed good establishment, tillered well and were well set up to produce a good number of ears, before being hit by wet and dull weather in May, with June, July and August continuing fairly dull.

“This was a promising year that did not realise the early promise. We had a good start to the season with a disappointing end,” he said.

The lack of summer sun led to grains per ear being lower than in previous years, while specific weights also suffered, and so 2021 overall yields were slightly lower than the eight-year YEN average of 11t/ha.

At the start of the wheat harvest, grain traders were looking for an improved harvest of 14.5-15m tonnes after 9.7m tonnes in 2020, but after a dull summer, the Defra official estimate put the wheat harvest at a disappointing 14m tonnes.

Mr Lamyman said the key to success came from variety choice, fungicide use and crop nutrition. He looks for varieties with a score of 6 and above for septoria disease in a 1-9 scale, where 1 is susceptible and 9 shows good resistance.

Varietal disease resistance is important as no yellow rust fungicides can be used in the autumn, while use of fungicides were key this season as he used a strong T1 application, which proved wise when wet weather brought in septoria later in the season.

On the crop nutrition side, he uses foliar feeds to encourage rooting in the autumn and then feed the crop through the spring and summer and applies a high level of nitrogen at 350kg/ha on his potentially high-yielding crops.

This brings variable costs to a relatively high £800/ha for seed, fertiliser and sprays on the chalky loam Wold soils of his 600ha farm at Worlaby, just north of Horncastle.

For next season, with ammonium nitrate nitrogen prices having more than doubled since June, he will be looking to reduce nitrogen rate on the variety Theodore, as it is a feed wheat with a naturally high protein content.

He grew the two-row feed variety Tardis on his Wolds farm using 250kg/ha of nitrogen fertiliser, a five-spray fungicide programme and multiple use of foliar feeds.

The highest YEN oat yield came from Simon Best, who, along with his brother Rory, is a former Ireland rugby player. He grew a 9.2t/ha crop of the winter oat variety Mascani in County Armagh, with good use of compost and organic manures, and careful timing of the four fungicides he used last season.

Top spring barley yield went to fellow Northern Ireland farmer David Matthews, from County Down, with a yield of 9t/ha.

On oilseed rape, Lincolnshire grower Mark Stubbs’ winning yield of 6.7t/ha came from a a late-drilled crop, forced upon him by the late harvest in 2020.

This crop was only drilled on 10 September on the Lincolnshire Wolds, but the late drilling meant the late-developing crop missed the late frosts in spring 2021, with the first flowers of this crop showing only on 23 April.

His growing regime includes two fungicides – in the autumn and at flowering – and he applied 210kg/ha of nitrogen. The crop was desiccated on 2 August and harvested in the third week of August, after he had cut a big chunk of his winter wheat.

“Treat the plant as you would a human – get the nutrition correct and there will be less disease” was his top tip for success.

YEN Innovator of the year award

For his high yields, innovative ideas, and use of trials and analysis for yield enhancement.