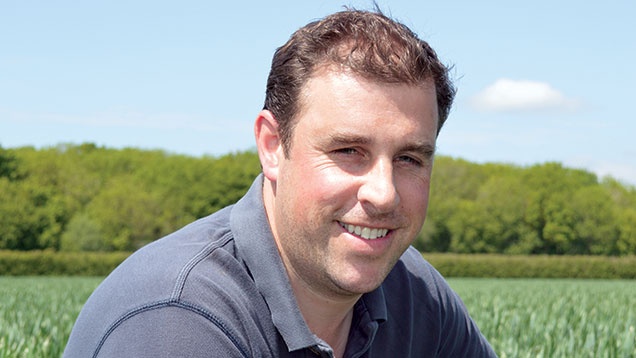 James Faulds was hoping to be spraying in the rain during June to feed his Suffolk wheat crop and try for a record yield.

Farming some of the driest land in Britain, his idea was to apply liquid nitrogen fertiliser to boost his feed wheat with any harmful scorch.

But with no rain during the flowering period of his winter wheat crop and none forecast, he simply could not justify the expenditure with current low grain prices.

A fracking technique is being looked at by Adas to improve the aeration of soils at Hill House Farm, in a method often used in ornamental grasslands such as golf courses.

In the method, a probe is sent down 1m and a blast of air sent down and then ground seaweed added to keep open any fractures created and then another blast of air applied.

No visible difference was seen in April, but Mr Faulds believes differences could be seen later in the summer when drought stress increases.

He did apply an extra 60kg/ha of liquid nitrogen to one tramline on 19 June as a field trial which was followed by a very light 4mm of rain three days later.

See also: How one farmer is attempting a world wheat yield record

Last summer his top wheat yield was a shade under 14t/ha and he believes the crop may have run short of nutrients and he looked to made amends this summer.

“We look to feed the crop throughout the season and with later maturing varieties this can mean later application of nitrogen,” he tells Farmers Weekly.

Liquid nitrogen can scorch the top leaves of his wheat so that is why he was keen to wait for any rain before trying out this potentially yield-boosting operation.

“We had looked to put it on only with rain forecast as liquid nitrogen could easily cause scorch at that stage of the season,” he adds.

Last season, Mr Faulds grew a crop of Santiago winter wheat which yielded 13.8t/ha and earned him the bronze award in a yield competition organised by crop scientists group Adas.

Across 190ha of his wheat land based round the Aspall cider plant his average yield was 11.8t/ha last year on heavy land where he is gradually improving the drainage.

It is one of the highest spots in Suffolk where local showers can often miss and the average rainfall can dip below 500mm (20ins) in some years so water is often a yield-limiting factor.

His rotation is two winter wheats followed by oilseed rape, while on some of the lighter land sugar beet is added to the cropping cycle.

After his success in last year’s Adas Yield Enhancement Network (Yen) competition, he has picked a new wheat variety and had planned extra nitrogen in the summer to boost yield.

The new variety Evolution is replacing Santiago due to its better yield and disease resistance, and it also fits in well with his liking for late maturing wheats to get a long grain filling period in the summer.

Autumn drilling is delayed until the last week of September to give time to control the low levels of blackgrass seen on the farm, and last autumn his wheat crops generally established well.

Low winter rainfall followed by a dry cold spring slowed down early spring growth but also held back disease development with strong winds from the east helping to keep the wet weather disease septoria at bay.

The dry weather in April and damage from a spring-applied blackgrass herbicide held crop growth back until the weather turned wetter in May.

But this also held disease back and there was no need for a T0 fungicide in March on his more disease resistance varieties of wheat such as Evolution, Relay and Diego, but one was needed on Santiago and Conqueror.

These two latter varieties needed a boosted T1 fungicide approach, so the saving for the more resistance varieties over both the T0 and T1 spray timings was about £18/ha.

This was especially welcome after a six-spray fungicide regime was needed in 2014 to keep his crops clean at a cost of more than £120/ha.

This season was generally a low disease year, with the low levels of septoria seen in the early spring not developing due to the dry weather.

With a four-way split of nitrogen amounting to 225kg/ha, the plan was to try and apply another 60kg/ha if rain was forecast in the first half of June.

This would have also helped to push up grain protein levels, as he has managed a £5-6/t premium when his feed wheat is accepted by flour millers for use in blending

Four way split totalling 225kg/ha with the first 25kg/ha as ammonium sulphate to get sulphur into the crop and then further three applications of liquid nitrogen. A further 60kg/ha of liquid nitrogen was used on one trial tramline in June.