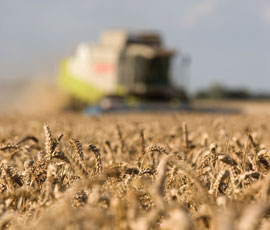 “It’s blowing really hard now – we haven’t had any rain yet but it’s heading this way,” he said.

“It’s been a year to forget, that is for sure. I’m very glad I’ve only got 162ha – I don’t know how the larger boys are managing.

“There’s an awful lot left to cut – a lot of the spring barley is only just fit, and wheat is the same. It doesn’t exactly fill you with enthusiasm to expand.”

Farmers had been busy combining over the weekend, and it was a good job the crops were only just ripe, said Mr Davidson. “Otherwise this weather would be disastrous.”

Wheat yields averaged 8.2t/ha, having done over 9.8t/ha for the past 12 years. “It was all Riband; I’ve tried other varieties but none of them have ever matched Riband.

“It’s a variety that never does very badly – in a bad year it still produces an average yield.”

Volume winter barley yielded a surprising 8.2-8.4t/ha. “But the quality was the worst we’ve ever harvested, with a bushel weight of 60kg/hl even after being dried.

“All year it had the potential for a 9.8t/ha crop, but there were so many blind grains and even whole blind ears – it’s really quite amazing that it yielded as well as it did.”

Concerto spring barley all made the malting grade, he added. “But it only yielded about 5.6t/ha – it’s all down to the lack of sunshine all year.”

Oilseed rape was drilled and up, after hefty applications of slug pellets, said Mr Davidson. “The first winter barley is through, too.

“We were helping a neighbour combine yesterday, at 30% moisture – I’m so glad that we’ve got a small farm.

“We sold most on contract at lower prices than today, and we will manage to fill the contracts – just. But we won’t have anything left over to sell at these higher prices. It really has been a depressing year.”