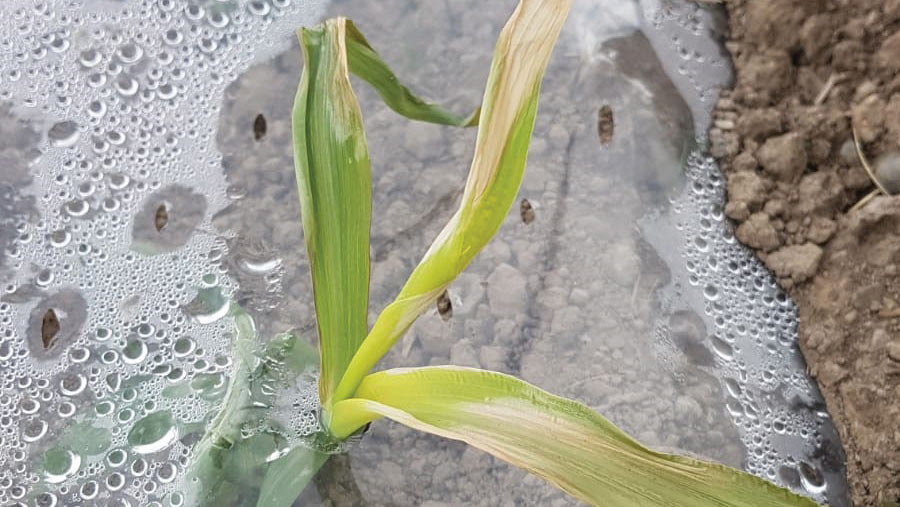 Recent cold weather has brought sub-zero temperatures and frosty nights to many UK farms, leaving maize crops vulnerable to damage as they emerge in the winter-like conditions, with temperatures reaching as low as -6C.

While maize crops can tolerate temperatures around 0C, anything below freezing will cause crop damage as leaves begin to wilt and die.

See also:How to successfully control weeds in maize without Calaris

Mr Morgan said the extent of frost damage to young maize plants was linked to the temperature and growth stage of the plant.

“While the risks to above-ground leaf damage can be serious, yield penalty will be minimal as long as the growing point of the plant is not frozen,” he said.

The growing point of the plant typically remains below ground – and as a consequence is protected – until about growth stage five, where the maize plant has five fully developed leaves, with the sixth leaf visible but not fully emerged.

However, he warned that if sub-zero temperatures struck and crops became frosted at growth stage six and onwards, plants would be unlikely to survive, even if the conditions were experienced for only a couple of hours.

He advised growers to allow three to five days before assessing the impact of frost on their crops. This is because after five days, new growth will usually be detectable, with recovery more rapid on warm days and significantly slower if temperatures remain cool.

Grower Mark Price, of the 60ha Poplars Farm, near Shrewsbury, runs a herd of 100 pedigree Holstein cows and says low temperatures are affecting his maize crops.

“We have had frosts on multiple mornings with temperatures reaching -1C, but I expect it has actually been much colder than this, which has certainly had a negative impact on this year’s maize crop,” he said.

Yields usually average 45t/ha. He always grows some of his maize crop under plastic to provide him with greater yield certainty.

Half of the crops are grown under plastic this year, which has provided some frost protection. But he said 10% of the crop had emerged through the plastic, at a height of about 15cm, and had taken a hammering from the cold, with these crops showing signs of leaf wilt and necrosis.

Crops were drilled on 21 and 22 April, considerably earlier than usual, and emerged nine days after drilling.

Mr Price said this was the most forward his crops had ever been for the time of year, and he hopes they will still yield well despite the cold spell so early in their development.