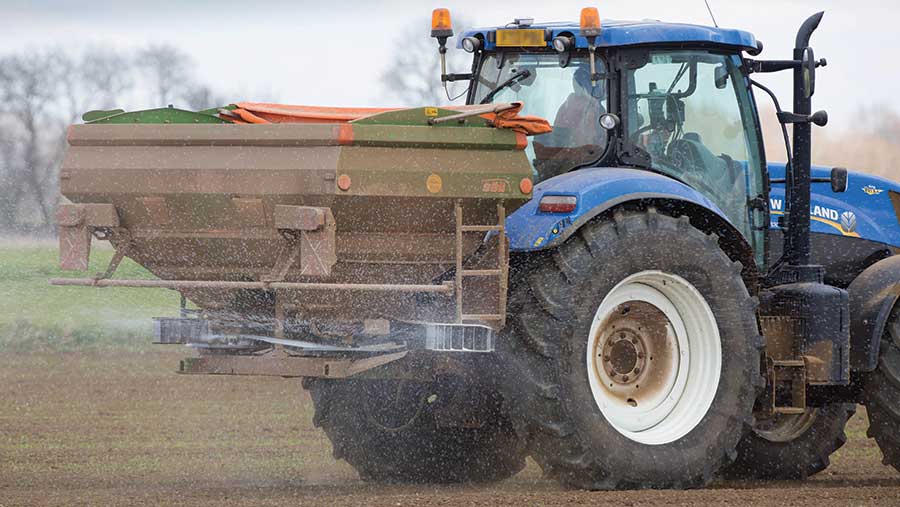 Dorset grower Joe Foot is set to cut his fertiliser use on his spring barley and maize this season due to high soil nitrogen mineralisation after a mild winter and benefits from cover crops.

This spring he hopes to cut bagged nitrogen applied to his spring barley by 25kg/ha and maize by 30kg/ha to save himself money after receiving soil nitrogen test results.

For the past decade, Mr Foot has been analysing soil mineral nitrogen and the nutrients in livestock manure with the aim of not buying in phosphate and potash fertiliser and cutting bagged nitrogen use.

“Recording the nutrient content of what we are applying gives us the confidence to reduce bagged nitrogen applications over time,” he tells Farmers Weekly.

He runs a mixed farm with his brother, which sprawls across 1,700ha between Dorchester and Weymouth, with 800ha of combinable crops, 400ha of maize, 500ha grassland and a 960 dairy cow unit.

“We try to be as precise as we can in terms of nutrient management and spreader calibration. We have our muck analysed so we know what’s going on to the crop and this helps us cut our artificial nitrogen use,” he adds.

Yield mapping is also used at Bayard Dairy farm to offer scope for slashing nitrogen applications more in the future.

From last autumn to this spring, the average nitrogen in soils has almost halved to 62kg/ha – just shy of the national 65kg/ha average.

Mr Stephens notes that rainfall in the Wessex area from November to February has been significantly above the long-term average, resulting in higher nitrogen leaching.

Despite this, half of all available nitrogen is in the top 30cm of soil – far higher than the UK average for this spring.

On average, some 31kg/ha of nitrogen will be available to spring-drilled crops in the Wessex catchment, compared with the UK average of only 20kg/ha.

“You have to look at SMN results in context of averages and then they are a good indication of nitrogen levels in soil,” says Mr Stephens.

“The reduction in soil nitrogen over winter is about average for this land. Nitrogen losses vary on what crop is in the ground and crop management,” he adds.

This is where Mr Foot’s oil radish and phacelia cover crop comes in. This crop contains 40kg/ha of nitrogen and Mr Stephens estimates half of this will be available to the following maize crop.

‘No one rule fits all for UK this spring’

Frontier’s fertiliser technical manager, Mike Slater, paints a split picture of nitrogen levels in soils around the country, based on the company’s SMN test results.

Soil temperatures in southern and western parts of the UK only briefly fell below 5C over the winter, delivering more nitrogen and sulphur mineralisation, he explains.

Meanwhile, eastern and northern regions have had generally lower soil nitrogen levels due to colder temperatures since the start of the year and rainfall leaching nitrogen further down the soil profile.

Winter crops that are yet to receive a nitrogen application are looking hungry and will need an application as soon as possible, but there could be potential to save on fertiliser applications in more forward oilseed rape, he says.

But Mr Slater warns that results from earlier testing may now show a slightly optimistic picture that could misinform growers’ fertiliser decision making.

“Tests in January showed nitrogen levels were generally higher than average, but tests in February and March showed figures have declined,” he says.

“Now the top 30cm of soil has lower nitrogen levels than the long-term average and this may mean spring-drilled crops struggle if growers are basing their applications on test results from earlier this year,” he says.