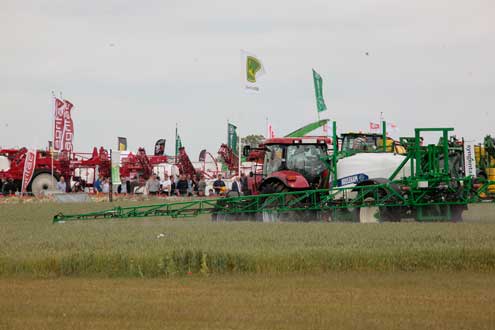 Nearly 50 of the latest self-propelled, mounted and trailed machines are being demonstrated at the Sprays & Sprayers Arena at Cereals 2012.

“These offer potentially big benefits, whether agronomic, environmental or in terms of cost, especially when linked with other areas, such as drilling, crop protection and seeds – all of which are gathering pace.”

Surrounding the arena about 40 specialist suppliers of sprayers and associated technology will be on hand, making it the best place to compare the sector’s latest offerings and to ensure increasingly expensive inputs are delivered as accurately and effectively as possible.

Lemken is showing its next generation Sirius 8 and 10 series mounted sprayers at Cereals. The modified aluminium boom, up to 30m on the Sirius 10, has a moulded oval profile said to cut weight and improve stability. The Sirius 10 is the first Lemken sprayer with individual nozzle switching and both models are available from autumn 2012 with tank volumes from 900 to 1,900 litres.

Horsch will bring three new sprayers to the UK, the self-propelled PT 270 and trailed GS 8000 and GS 6000. The high-spec sprayers can operate precisely at speed using Horsch Leeb’s boom control that maintains a 25cm boom distance from the crops, says the firm.

Berthoud’s new Raptor “Front Cab” sprayers are fitted with a Claas-designed, hydraulically elevated cab. They feature the company’s EC Tronic system that displays key information on a large, backlit colour screen. There are three models – 3240, 4240 and 5240 – with boom widths up to 32m, 38m and 42m.

Cereals is the first outing for the Dammann DT500 from importer Chantry-Dammann UK. The self-propelled machine, based on a Mercedes-Benz Unimog, includes four-wheel steering, a 4,500-litre tank, a 60-litre induction hopper, and a three-section folding 36m boom.

Micron’s Varidome S3, a shielded inter-row CDA sprayer for weed control in OSR and vegetables makes its Cereals debut. It can treat three beds at a time and spray inter-row widths from 170mm to 700mm and bed widths from 1.3m to 2m wide.

Several new nozzles are also being shown. Harrison Ag Technologies and Altek have the second generation Smart Nozzle which uses GPS technology to control individual nozzles on the spray boom using the latest electro pneumatic direct control valves from Altek. This ensures minimum over-spray and can reduce chemical costs by 20%, says the company.

Hypro’s new VPTech inclined nozzle is designed for pre-and post-emergence autumn sprays. It delivers a flat fan spray at a 30° incline. The nozzle comprises a Hypro TwinCap body – one 80 or 110° VP tip and a blanked second outlet available for twin-spray applications. Nozzle tips should face alternately forwards and backwards along the boom.