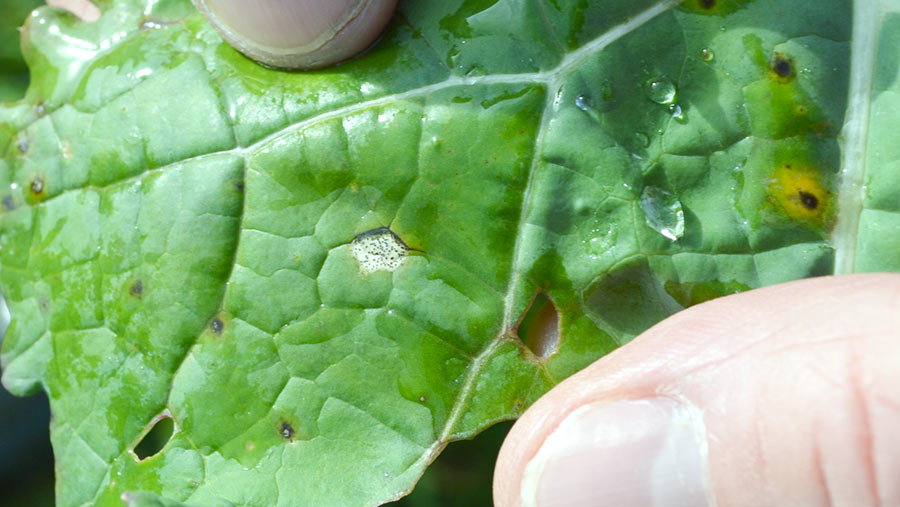 Oilseed rape growers with well-established crops are being urged to be vigilant about autumn diseases, as an expected smaller national crop could lead to higher prices at harvest.

Those crops that have survived the ravages of cabbage stem flea beetle could be very valuable next harvest, so growers should be looking to protect them from phoma and light leaf spot.

Mild and very wet autumn weather has led to signs of phoma emerging in crops, and is likely to encourage the spread of the potentially more yield-damaging light leaf spot.

Mike Thornton, head of crop production at agronomy group ProCam, says crops in his area of East and West Sussex are reaching the spray threshold for phoma, and light leaf spot development is likely to be close behind.

“It’s been warm and wet, so we are seeing crops reach the threshold for phoma spraying, and as we are seeing phoma, we should be considering the threat from light leaf spot,” he says.

Growers are advised to spray oilseed rape with a fungicide if 10% or more of plants are infected with phoma, which appears as bleached patches on the leaves, covered with dark spots.

Too wet to travel

With some crops in Mr Thornton’s area of Sussex being grown on heavy land that is too wet to travel with a sprayer, this autumn could be a one-spray fungicide season rather than a two-spray one – if the sprayer can get on at all.

He suggests growers should look at the disease-resistance scores of the oilseed rape varieties they are growing and how early their crops were drilled before considering a spray programme.

“With better resistance being seen against phoma in oilseed rape varieties, many growers are looking to hold back and only spray once. This looks likely to be a one-spray season,” he says.

Two azole fungicides, difenoconazole and prothioconazole, are recommended to control phoma, while the latter and another azole, tebuconazole, control light leaf spot.

Prothioconazole is the most effective of the two against light leaf spot, but tebuconazole is cheaper and has some plant growth regulator activity.

Mr Thornton advises using a mix of prothioconazole and tebuconazole on well-established rapeseed crops. On struggling crops, where plant growth regulator activity is not needed, he recommends a reduced rate of prothioconazole.

Early-drilled crops that have established quickly may need some plant growth regulator treatment, which will also help with rooting, he adds.

Crop consultant Adas says the late summer and early autumn rainfall helped speed up the maturation of phoma spores on stubbles, bringing an early onset of the disease in early October.

Its advice is to first treat varieties with phoma/stem canker resistance ratings of 7 and less (in a 1-9 scoring system, where 1 is very susceptible and 9 shows good resistance), as well as backward crops.