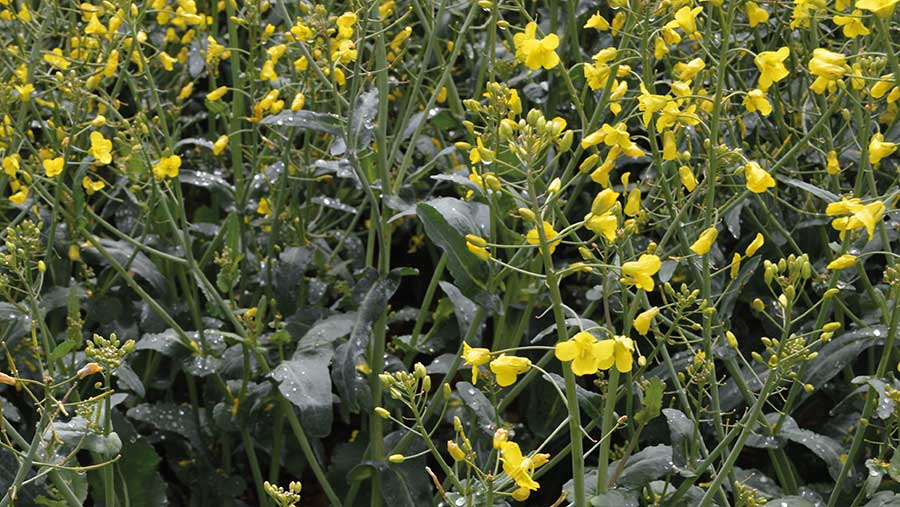 Alex Jessop-Gaymer is looking to grow a larger area of a new sclerotinia-tolerant oilseed rape variety next season after it saved him the cost of a flowering fungicide spray this spring.

Most oilseed rape crops on his Essex farm received two flowering sprays this year, but the new disease-tolerant PT303 only had one, and he is positive for the variety’s future on the farm.

“At the moment, we are looking to grow a bigger area next season as we can see the potential to save on sclerotinia sprays,” he says.

This season, he is growing a 4ha demonstration block of the variety as part of 250ha of rapeseed on the farm, including other varieties such as the hybrids Aurelia and Exstar, and the conventional Flamingo.

The block of the new variety was direct-drilled in far-from-ideal conditions after a late-harvested crop of spring wheat. Sowing was delayed until the second week of September rather the farm’s usual timing of the second week of August.

Mr Jessop-Gaymer adds that the variety was not given the best start, as it had to grow through wet chopped wheat straw and was then not overly vigorous in the autumn. He even contemplated ripping it up before seeing signs of recovery.

“In the spring, the crop simply rocketed up and, within 10 days, had caught up with all the other varieties,” he says.

He farms with his father-in-law, John Gaymer, and his wife, Katie, in the family business, RP&J Gaymer at Dunsteads Farms, Ingatestone, near Chelmsford, covering about 1,800ha of arable land. 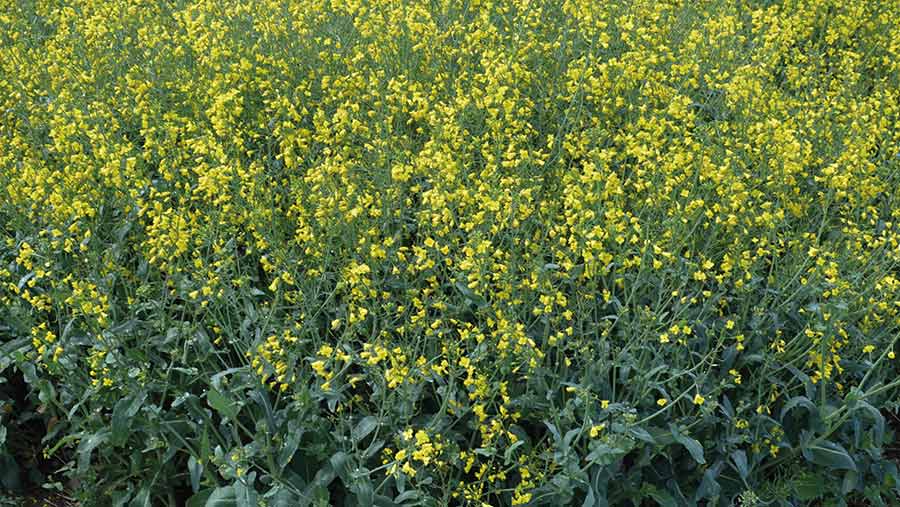 His initial oilseed rape flowering spray across the whole of the farm’s 250ha of oilseed rape was the azole fungicide prothioconazole, while all the varieties except PT303 received a further spray of the same azole. Therefore, growing the new variety saved him the cost of one fungicide spray.

It causes white stem lesions with black sclerotia in the plant’s stem cavity, which can cut off vital nutrition to the crop canopy and cause the whole plant to die.

Jonathan Bellamy from PT303 breeding company Corteva says small 4ha plots are being grown on about 28 farms, stretching from the south coast of England to Aberdeenshire, to demonstrate the variety to growers and agronomists.

He says the variety resists sclerotinia in two ways – first through its multi-genetic tolerance, and also because of its plant structure, as the variety branches less than others to allow better airflow through the crop.

This plant structure is claimed to reduce humidity within the crop and thus limit one of the key factors in the spread of the disease.

Mr Bellamy, the group’s area sales manager in central England, from East Anglia and across into Wales, is cautious about making excessive claims about the extent of the tolerance of the variety until further work is done.

“The variety will enhance the flexibility and timing of crop protection, but not necessarily replace it,” he says. 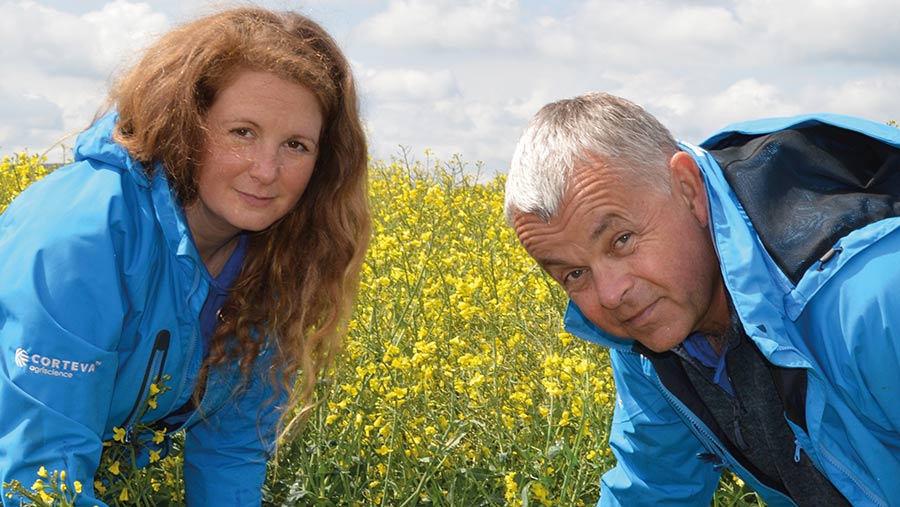 Fungicide timing is critical for sclerotinia disease control. Existing fungicides are preventative rather than curative, so once growers see the infection in their crops, it is too late to act.

The soil-borne fungal pathogen can remain viable in the soil for up to eight years, so long oilseed rape rotations can help to minimise the risk of the disease.

The breeder says most flowering fungicides offer about three weeks’ protection from sclerotinia. One application can cost £25-£30/ha, and two sprays will set you back about £40-£45/ha to cover the flowering period, which can last for up to eight weeks.

Corteva also says PT303 yielded over 15% more than non sclerotinia-tolerant varieties in six of the group’s untreated plot trials, and it adds that the higher the severity of the disease, the higher the benefits from the trait. 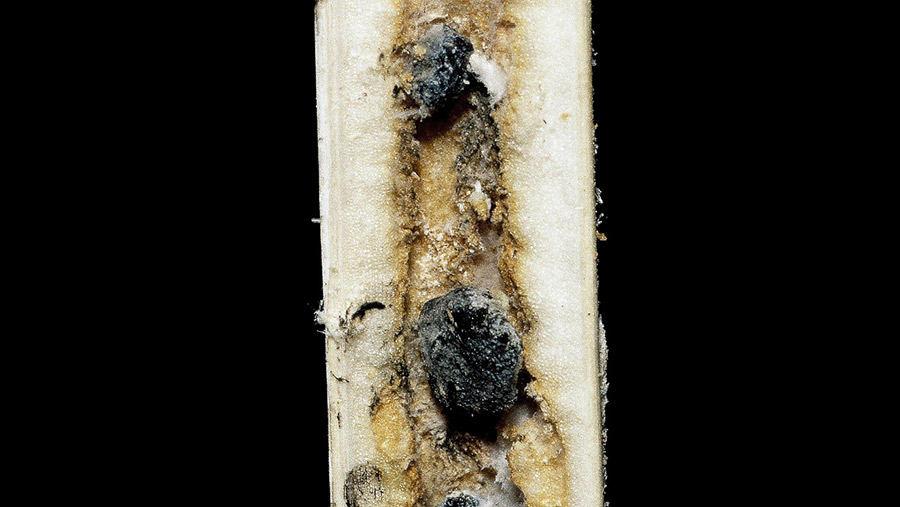 PT303 has given the highest gross output of any variety coming up for inclusion in the next AHDB Recommended List, which will be announced towards the end of this year, with a gross output of 111% compared with Expansion at 104% and Campus at 103%.

In addition, the variety has a high oil content of 46.2%, shows turnip yellows virus resistance, and has good resistance to phoma (7) and light leaf spot (6) on a 1-9 scale where 1 is susceptible and 9 shows good resistance.

In official trials, it showed good, vigorous growth in the autumn and spring, and achieved a National List early vigour growth score of 6, compared with Expansion at 5.8 and Campus at 5.5 in the 2019-20 season.

Good demand is expected for the variety, with enough seed to drill 2.5% of the rapeseed crop area this summer, or 5% of the hybrid market if assuming a 50-50 split between hybrid and conventional varieties.

Sclerotinia is caused by the fungal pathogen Sclerotinia sclerotiorum, and the infection cycle requires three main factors – the presence of sclerotinia inoculum, warm and humid weather conditions, and crops in flower.

These spores land on oilseed rape petals and use external nutrients, derived from petals and pollen, to enable them to germinate and infect the plant. Plant infection requires long periods of high humidity and warm night-time temperatures.

Sclerotinia spreads from leaf lesions to the stem and can cut off the supply of nutrients to the crop canopy, with the potential loss of whole plants.

The disease often causes little damage, but can halve yields when severe. The AHDB runs an annual monitoring service that warns of the risk of the disease.

Fungicide timing is key for good control, as products available are only protectants and have little or no curative activity.

The best timing for a single spray is usually just before mid-flowering on the main stem and prior to major petal fall, and this can give good control for about three weeks. Two sprays may be required to protect crops at high-risk sites throughout the flowering period and when the flowering period is extended.