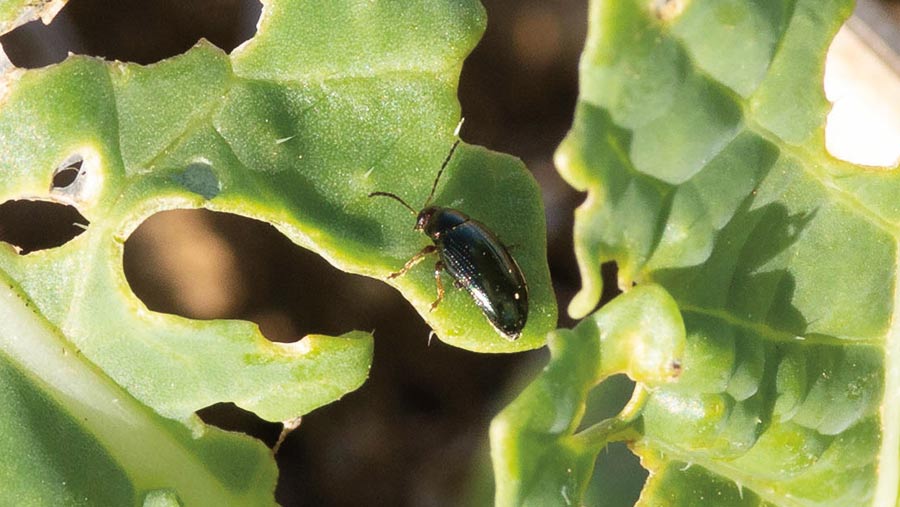 Backward oilseed rape crops suffering from pest damage and a dry autumn are likely to benefit from early nitrogen fertiliser, while growers are advised to be cautious about using growth regulator sprays.

Serious cabbage stem flea beetle attacks and a bone dry September have seen many crops struggle through the winter months, although many crops can compensate from quite substantial setbacks.

David Leaper, oilseed rape specialist with agronomy group Agrii, says thankfully most crops have not sat in water over the winter, so their roots should be sufficient to support good canopies.

“Struggling crops can really profit from a good early nitrogen boost, and the last thing they need is any check as they come into spring growth,” he said.

Therefore, delaying a plant growth regulator (PGR) until the green bud stage, or using the less-stressful growth-regulating effect of extra tebuconazole in a light leaf spot fungicide spray might be a better bet than specific growth regulators at stem extension.

Mr Leaper said growers should not be tempted to hold back on light leaf spot fungicides that can be used with a late PGR, as this disease could have a devastating effect on already struggling crops.

He suggested a similar approach for crops that look reasonable but are likely to be carrying significant burdens of flea beetle larvae, as crop compensation means the level of loss doesn’t appear to correlate well to larvae numbers.

In trials of crops badly infested by flea beetle, varieties that grow away earliest in the spring suffer noticeably less loss of main stems and stunting than later-developing hybrids and conventional varieties, he said.

“We must give crops with the best ability to compensate all the help they can get to do so. Effectively writing them off because they’re carrying a sizeable larval burden is about the worst thing we can do. It just makes poor performance a self-fulfilling prophecy,” he said.

Matching nitrogen applications to the crop’s green area index (GAI), which is the ratio of green leaf and stem area to the area of ground on which the crop is growing, is key and GAI should only be measured once growth has really started in the spring, Mr Leaper added.