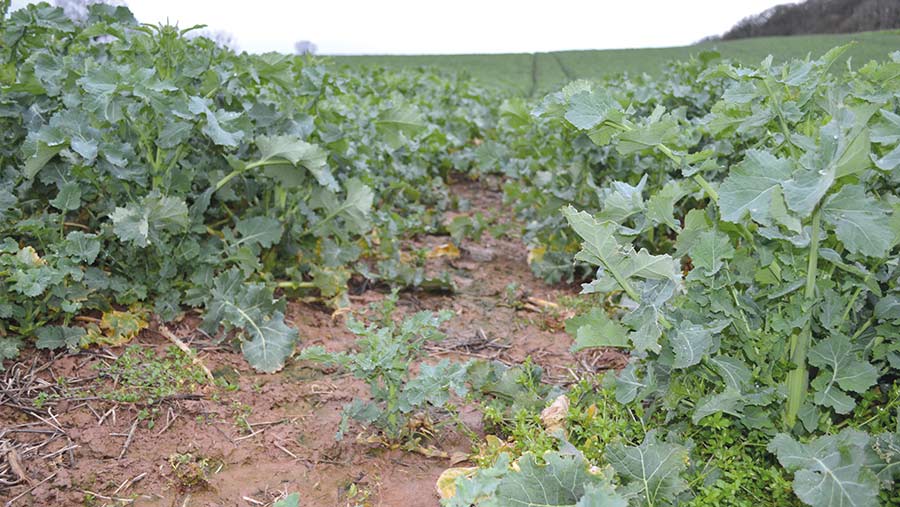 Oilseed rape growers may be able to trim back on expensive nitrogen fertiliser this spring as many crops are too forward, and these large-canopy crops could actually result in lower yields.

Pulling back nitrogen rates and the use of a specialist plant growth regulator are two methods growers can employ to manage those big crops, many of which have seen near-ideal growing weather since drilling last summer.

Crops at trial sites from Wiltshire up to the Scottish Border, conducted by hybrid oilseed rape breeder Dekalb, which is part of Bayer, have highlighted concerns over well-developed crops that could be threatened by late frosts and snow.

Richard Williams, market development agronomist at the plant breeder, says crops that have their growing points well above the ground are vulnerable to frost, while those with very large leaves on long petioles could be threatened by heavy snow.

“Crops that are very well established coming through into the spring can be at a disadvantage, leading to plant damage,” he tells Farmers Weekly.

Mr Williams adds that having large-canopied crops at this stage can lead to a reduction in yield of 0.3-0.5t/ha. This is caused by a lack of light getting into the crop, leading to stem and pod abortion, and plants could harbour wet weather diseases such as light leaf spot in their thick growth.

He suggest growers start looking at their crops to assess the green area index (GAI). It can be determined by cutting all the crop in 1sq m, measuring the fresh weight in kilogrammes, and multiplying the weight by 0.8.

As this is a timely and complicated procedure, there are apps available from agrochemical groups which can assess GAI, and there is advice on the AHDB website giving photographic examples of crops at different GAI values.

Many crops have GAI values of between 1 and 2 this January, but some are at GAI 3.5, so there is some scope for cutting back on nitrogen, adds Mr Williams.

In addition, after a generally dry and mild autumn and winter, there is likely to have been less leaching of nitrogen from the soil than normal, and also more mineralisation of nitrogen in the soil, so careful soil testing for N availability is important.

Therefore, there could be scope to cut back, say 20-30kg/ha, on early nitrogen applications, which are largely used to develop the crop canopy. Growers can always apply a little more if needed later for yield.

Ammonium nitrate fertiliser prices have more than doubled in the past six months, so valuable savings could be made.

The second method to control early rapid growth is to apply a specialist plant growth regulator to improve the crop canopy structure. It can be applied along with a fungicide to control light leaf spot in the early spring.

These specialist products include Caryx (metconazole + mepiquat chloride) and Toprex (paclobutrazol + difenoconazole). If applied early in the season, the azole prothioconazole (such as Proline) could be added to the mix for light leaf spot control.

Ideally, growers should be aiming for a population of 25-40 plants/sq m coming out of the winter, and growers who have crops with more than 50 plants/sq m will need to take some action, says Mr Williams.

Getting plant populations right starts with drilling, and he suggests when sowing early in August, growers should use a slow-growing variety that will not get too big in the autumn. These hybrids rapidly establish to the three- to four-leaf stage, but will then not develop rapidly in the autumn.

These include varieties from the Dekalb stable such as Exstar, and a new variety, CWH462, coming up for possible inclusion in the AHDB Recommended List later this year.

For later drillings into September, Mr Williams suggests varieties such as Exsteel, which is a rapid developer, so can help compensate for the later drilling date