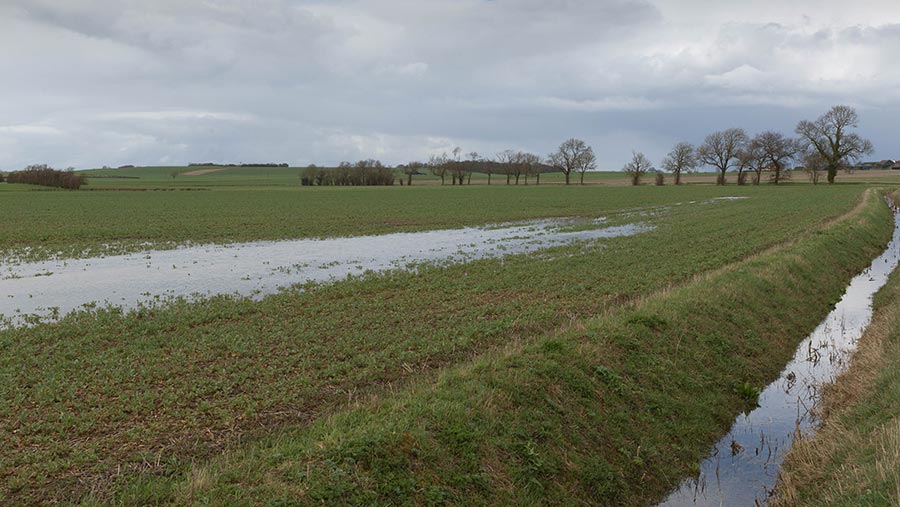 Oilseed rape growers are being urged to use a simple six-point plan to assess their crops for yield potential before looking to encourage growth with the first dose of nitrogen.

They are being advised to get out into their already wet field to assess levels of rooting, waterlogging and levels of cabbage stem flea beetle larvae before planning management for the spring.

Many crops went into winter looking generally well, but prolonged rain has left some waterlogged and those deemed not set to yield at least 3t/ha may struggle to make a profit.

On the other hand, oilseed rape has incredible powers of recovery, and late-drilled small overwinter crops can turn in decent yields and may just need nitrogen fertiliser due to low soil mineral nitrogen levels after a wet winter.

Sarah Kendall, crop physiologist at crop consultant Adas, says growers should assess their crops using the following six points to see if they will give enough potential yield to make spring inputs worthwhile.

“Despite the weather, many crops are better placed than last year as they are more even across the field,” says Dr Kendall.

Crops with populations as low as 10 plants/sq m can give a successful harvest and often the key is a good rooting structure. Well-rooted oilseed rape plants have a wide root collar of more than 10mm, a deep tap root of at least 10-15cm and many fibrous roots in the top 10cm of soil.

Darren Adkins, commercial technical manager for agrochemicals and seeds group Bayer, based in south Lincolnshire, suggests that despite the wet conditions now is the time to examine crops.

“I am cautiously optimistic. The crops look better than this time last year and rooting is better and top growth better despite the waterlogging and larval levels,” he says.

If growers decide after looking at the six points that their crops are worth investing in and not ripping up in favour of a spring-sown crop, then nitrogen strategy is likely to be the first consideration.

The oilseed rape crop area this season has fallen to the lowest level for 35 years, with a year-on-year fall of 18.1% to 318,000ha, according to an AHDB Early Bird survey. This fall is due largely to flea beetle damage and establishment problems, and compares with a peak area of 758,000ha at harvest 2012.

Dr Kendall suggests a little-and-often approach with nitrogen, using more splits this season, may be wise as it will give growers more control over their crops, and data from Adas’s Yield Enhancement Network (YEN) shows that splits can give a yield advantage.

“Growers may look at more splits, as work at the YEN suggests the number of nitrogen application is linked to yield,” she says.

An average-looking crop may need 30-50kg/ha of nitrogen as soon as possible, she suggests, and very backward crops may require as much as 100kg/ha, while very forward crops could wait until the green bud stage for nitrogen.

Dr Kendall adds that growers should fertilise their crops for an optimum green area index (GAI) of 3.5 by early flowering, and for most crops these should finish with a harvested yield of 3.5-4t/ha.

The GAI is calculated by cutting off a 1sq m area at ground level, weighing it in kilograms, and multiplying that weight by 0.8. If crops currently show 50% crop cover, that equates to a GAI of about 1 and indicates that there is about 50kg/ha of nitrogen already in the crop.

Adas monitoring suggests that there was enough pressure from the flea beetle migration in autumn 2020 to give concern, but many crops established well and showed less visual flea beetle adult damage.

The question is now how high the larval burden is in crops, so growers need to cut open the stems and petioles of plants to look for larvae and give an assessment.

There is no clear threshold for larvae level, and no treatment for the larvae, so growers will have to be pragmatic in their assessment, says Dr Kendall.

It is often from January onwards when growers start to see flea beetle larvae affecting crops badly, with the centre of plants being eaten and no new growth evident.

In such a wet end to 2020 not a lot of crops had an autumn fungicide, which would have been mainly aimed at light leaf spot control, so a spring spray may be seen as a priority.

A SpotCheck scheme, conducted by Adas and funded by Bayer, offers free light leaf spot testing for leaf samples, and of the 59 samples checked in December only one showed visible sign of the disease, although 78% showed latent disease within the leaves.

Fungicide control is largely based on using one of two azoles, prothioconazole or tebuconazole – the first being more expensive and more effective, and the second cheaper with some plant growth regulatory effects.

Growers should check whether their oilseed rape varieties are early developers or late developers in the spring, as the former will be more likely to grow away from any flea beetle larval attacks.

Within the Bayer portfolio of varieties, Expedient and Extremus are particularly early developers in the spring, while others such as Exstar, Excited and Expectation are medium developers.