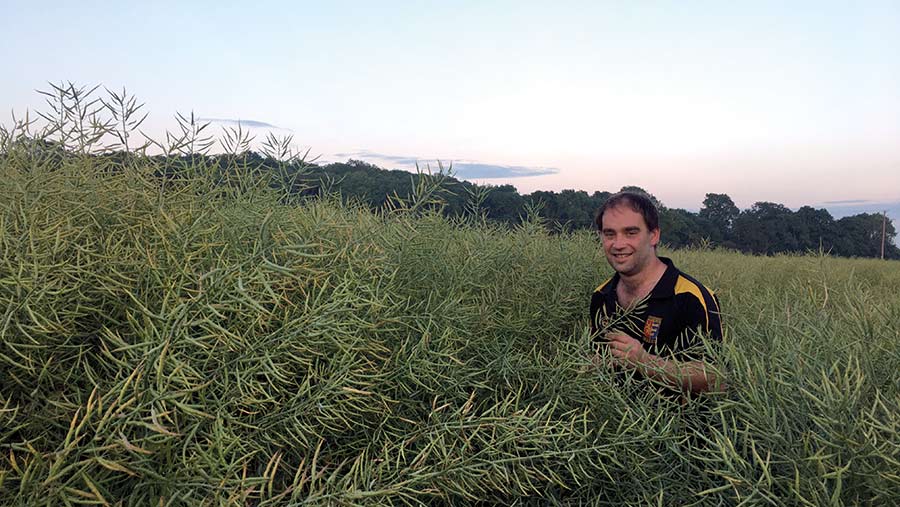 Suffolk grower Samuel Steward grows his oilseed rape crop in a six-year rotation and is achieving yields of more than 4t/ha with a firm focus on drilling seed into adequate soil moisture, no matter what the drill date.

These techniques, with the help of plenty of livestock manure, mean yields have touched 5t/ha in some years at the 300ha White House Farm, where Mr Steward farms in partnership with his father Roy and brother Henry, on predominantly sandy clay loam soils.

See also: How farmers can benefit from new way of paying agronomists

The family hope that using longer rotations will minimise the risk of cabbage stem flea beetle infestations over the long term.

“We’ve had areas that are poorer and not looking as well as the rest of the crop but we have never lost a significant amount,” says Mr Steward.

The Stewards grow 50ha of oilseed rape, 200ha of winter wheat, as well as vining peas, field beans and sugar beet on their farm near Framlingham, Woodbridge. They grow Campus and Elgar, both conventional rapeseed varieties.

“We use oilseed rape as the first crop in the rotation, then we have two crops of winter cereals, mainly winter wheat, then we add in a break crop like vining peas or field beans, followed by two further crops of wheat, before returning to oilseed rape. That gives us the six-year gap that we want,” Mr Steward says.

With this year’s crop podding well and averaging close to 2m tall, Mr Steward stresses the importance of drilling the crop into a moist seed-bed, as this drives good establishment.

“I don’t think we would consider growing oilseed rape unless there is enough moisture in the ground. Without it you lose the all-important early vigour. It is essential to drill the crop into moisture. Whether this is the first day or the last day of August, drilling into moisture is key,” he says.

Conserving moisture is also achieved by avoiding too many cultivations, with each machinery pass representing moisture loss from the soil.

All of Mr Steward’s rapeseed is drilled at a low seed rate, using a subsoiler drill, which drops the seed into the soil alongside the subsoiler leg.

“We still use a low seed rate, about 3.5-4kg/ha, aiming for big strong plants that can cope with higher flea beetle infestations. We find that if we drill at a high seed rate, we establish more plants which means more stems for the larvae to spread across.

“A bigger, stronger rapeseed stem can survive five to six larvae in a plant but this would severely detriment little stems, causing them to die,” adds Mr Steward.

As the Stewards use a low seed rate, ensuring enough soil moisture when drilling is key as they farm in a generally dry area in eastern Suffolk. Working with the weather is therefore important, with this year’s crop luckily receiving 8mm of rain the day after it was drilled.

Another tool in the Steward family’s toolbox is the application of 1,500t of pig and poultry manure across their home farm and contract farmed land.

“We put on manure before the second wheat crop which affects yields and crop health of the subsequent oilseed rape crop,” he says.

Having fertile land with high organic matter levels helps with rapid crop establishment, proving even more important during this year’s dry spring. Mr Steward is consequently looking to get more livestock back on to the farm, after the family’s dairy business ceased 40 years ago.

Mr Steward aims to leave oilseed rape volunteers in the ground for as long as possible when growing the next rapeseed crop in a nearby field, in a bid to reduce pressure from the flea beetle build up.

“We find that isolating the flea beetles in previous crops, followed by cultivation whilst allowing the new crop to establish in clean ground, really helps. However, it’s a case of trying different methods and figuring it out for yourself what works best in your situation,” he says.

He points out how one crop grown next to a preceding crop of oilseed rape was closely monitored for flea beetle, but in fact the field turned out to be one of their best crops yet, yielding up to 5t/ha, when average yields over the previous few years had been over 4t/ha.

Crops are sprayed only when absolutely necessary and then a pyrethroid insecticide is used. It is applied at night when pest activity is at its highest.

“We only spray once for flea beetle and if it doesn’t work first time, what is the value in spraying again? The two fields near the farmyard have had no insecticides this year,” he adds.

After noticing that slug and flea beetle pressure on headlands was considerably less than at the centre of the field, resulting in better rapeseed establishment, Mr Steward trialled rolling his oilseed rape fields twice to enhance seed-to-soil contact.

He suspected that greater soil consolidation due to extra traffic passes on the headlands resulted in a firmer seed-bed, thus allowing better establishment, so he wanted to investigate if this could be obtained across the whole field. 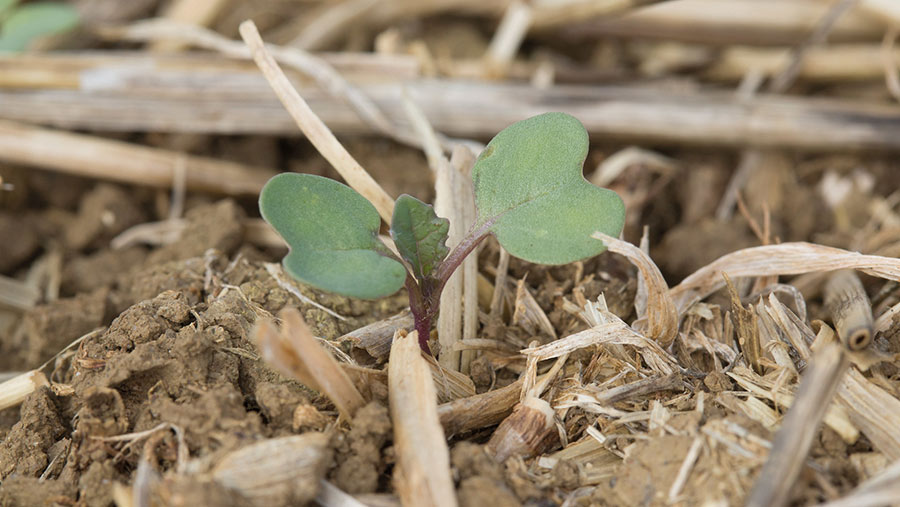 He now rolls all his rapeseed fields twice and at two different angles – first with the tramlines, then at 30 degrees to the tramlines – to ensure good seed-to-soil contact, helping the oilseed rape to get away quickly.

Companion cropping is another practice that Mr Steward is considering using in the future, but currently he admits that as he has no real flea beetle issues it would come at an additional expense with no real benefit.

He also raises a concern that sowing an extra crop with the rapeseed could potentially compete with it for moisture.

“I think we are quite lucky where we are as we don’t have major issues with flea beetles, compared with say the Midlands,” he says. “For the moment we will keep growing rapeseed while we can because there aren’t many other options for profitable break crops.”