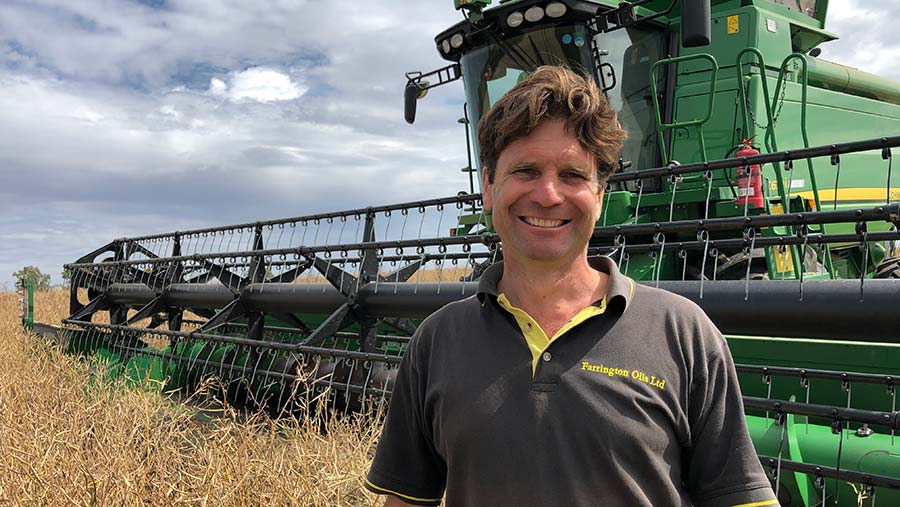 Duncan Farrington, an arable farmer in Northamptonshire, who produced the world’s first carbon- and plastic-neutral food product, has now completed harvest of his 36ha of rapeseed where the hybrid variety Azurite was grown.

The oil, which is a UK top 15 oil, achieved carbon-neutral status in January this year, making Farrington Oils the first food company in the world to be certified by the United Nations.

See also: What research is being done to tackle virus yellows in beet

As for many other oilseed rape growers, yields have been disappointing this year, down 1t/ha from their 3.5t/ha average as a result of the spring drought which hit the crops hard.

He said: “Lack of moisture has been a real issue- when the crop was planted it didn’t have any rain for about three weeks”.

The oilseed rape was planted on 26 August, with a companion crop of berseem clover, using a Weaving GD drill into oat stubble, 10 days later than usual. A couple of the fields planted have not been cultivated with a tine for over eight years.

Watch the OSR harvest at Bottom Farm and read the rest of the report below.

Mr Farrington puts the environment at the heart of his business. “I have always had a personal interest in the environment and soils, and have always looked for ways to be more sustainable, so it made sense to take the steps to become carbon- and plastic-neutral,” he explains.

The farm is Leaf marque certified, which involves an annual sustainable review of the farm’s energy, fuel and fertiliser inputs usage, which prompted Mr Farrington to delve further into his data and environmental records.

“Thinking about our marketing strategy going forward we realised that we had a great range of credentials which we wanted to get officially recognised,” he says.

Mr Farrington partnered with One Carbon World and the Woodland Trust to offset all carbon emissions used to produce and package his rapeseed oil, accounting for energy, fuel, water, logistics, employees commuting to work, as well as fertiliser and pesticide use.

“As the first farm to take this step, Farrington Oils have made a groundbreaking commitment that will inspire other companies around the world to take action and become carbon neutral.” 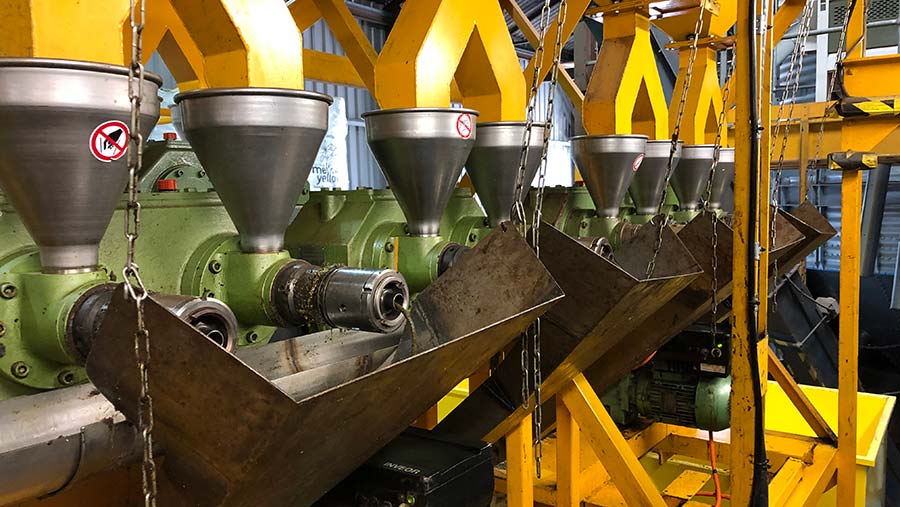 Carbon-neutral status was achieved by planting trees and installing solar panels, with sustainable energy sources generating more than half of the business’s total energy requirements.

“Renewable energies is something that my family have always been interested in, as my grandfather put up a wind turbine and biomass boiler during the 1970s,” he says.

However, he admits that the installation of solar panels on south-facing shed roofs was not a simple process, as the local electricity supply line had limited capacity for their renewable energy business venture.

This meant the family had to pay for the construction of an upgraded line to allow for two lots of 25kW and 11kW solar panels to be built on farm.

With farmers managing their land in a genuinely sustainable manner, Mr Farrington points out that it is perfectly achievable for UK agriculture to become carbon neutral by 2040.

“Implementing small changes on farm can make a huge difference, allowing us to maintain soil carbon levels, but we need to remember that all soils are different so this must be accounted for,” he says.

In fact, he explains that if worldwide agriculture could farm in a sustainable manner, 10-30% of global emissions could be removed, which is enough to offset worldwide travel.

He also highlights that although Farrington Oils has achieved carbon neutral status, the farming practice is, on paper, still hugely carbon negative. The method used to calculate his current status does not account for carbon soil sequestration as there is no internationally recognised protocol for this.

“Our business absorbs enough net carbon to fly one person around the world 519 times in an economy flight,” he says.

Currently, Mr Farrington is involved with an EU research body investigating a wider-scale collaborative method to measure soil carbon and tree planting data so this can be implemented effectively into carbon calculations in the future.

He is also involved in a British project to establish a “green development funding platform” looking at organisations wanting to offset their carbon emissions.

This could create a market for carbon credits, in which the agricultural industry would play an important role selling public goods to the wider society. This is a vision that Mr Farrington has been working towards for the past 20 years.

Farrington Oils also attained plastic neutral status, by helping remove the same amount of plastic waste from the environment as the business uses in its packaging.

The oil bottles themselves are glass, but the farm team measured how much plastic was used during production. This consisted of plastic labels, oil pourers and shrink wrap used to transport and protect the bottles, which equated to an annual use of 7.5t of plastic.

The team first tried to reduce the amount of plastic used, but with no current viable alternatives, Mr Farrington decided to collaborate with an environmental firm, rePurpose Global, to help the recycling and repurposing of plastic through the payment of a voluntary tax.

“Through this we are able to create a market for plastic, because if you give plastic a value, it won’t be thrown away,” he explains.

Cropping and soils at Bottom Farm

Northamptonshire farmer Duncan Farrington was the first in the UK to grow, press and bottle rapeseed oil on the family farm, where the rapeseed processing plant now runs 24 hours a day, seven days a week.

In his first year, Mr Farrington was able to bottle 6,500 bottles of oil. He can now achieve this in just one day.

All rapeseed grown on the farm is for the press, and more is bought from local sustainable Leaf marque farms, which are also officially certified.

“It really has been a great journey and such a huge success that my family and I are very proud of,” he says.

Soil carbon content has also increased by an impressive 75% at Bottom Farm in just 18 years as the family moved to a minimum-till and zero-till system. The plough has not been used since 1998.

“Deeper cultivations are still used on farm at times,” Mr Farrington admits. One fifth of the land each year is cultivated in this way. For instance, beans need a much deeper cultivation as the soil needs to be aerated.

He adds that because his soil organic matter levels have increased, the cation exchange capacity of the soils has also increased, enhancing the soil nutrition which means improved nutrient density of the food that he grows.