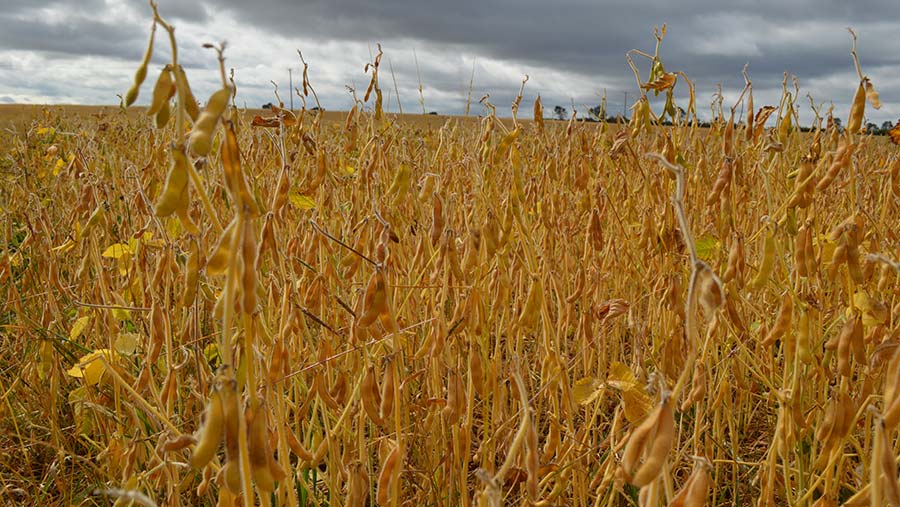 Bedfordshire grower Matt Broadhurst turned to soya beans to help control blackgrass and improve his soils, and is looking forward to a good harvest later this month.

He is hoping the low-input crop will outperform his spring beans financially and help him slice nearly a third off his nitrogen fertiliser bill for a following winter wheat seed crop.

The late-spring drilled soya crop gives him plenty of time to control troublesome blackgrass, and its nitrogen-fixing properties and soil improvement qualities are added benefits.

“It’s a spring break crop so it helps us control blackgrass and also improves our soil nutrient status so this year we are growing 88 hectares,” he tells Farmers Weekly.

Mr Broadhurst is hoping for a benchmark yield of 2.5t/ha to give a gross margin of £650/ha in this, his second year of growing the crop, after he was not put off by his drought-hit harvest in 2018.

Last year’s soya was followed by a wheat seed crop yielding a good 9.5t/ha on his medium to heavy clay loams, and tissue testing on the wheat enabled him to cut nitrogen back to 165kg/ha from a farm standard of 225kg/ha.

The decision to go for soya beans was part of a search for a spring break crop to control blackgrass at Bell Farm, Colesden, six miles north-east of Bedford, where he is farm manager. Oilseed rape growing has been abandoned after severe cabbage stem flea beetle damage.

The first year he grew 40ha of soya beans but yields were only half what he had hoped for at 1.25t/ha, although it still outperformed his spring beans.

The plan was to try out soya beans for five years, using a cover crop of forage rye and vetch after the preceding wheat crop and before the soya beans. A neighbouring farmer used his store lambs to graze off the cover crop over winter.

The ground is sprayed off with glyphosate once the sheep have departed in the spring, and the land is cultivated with a disc-press combination and drilled in early May at a seed rate of 150kg/ha with the variety Siverka. 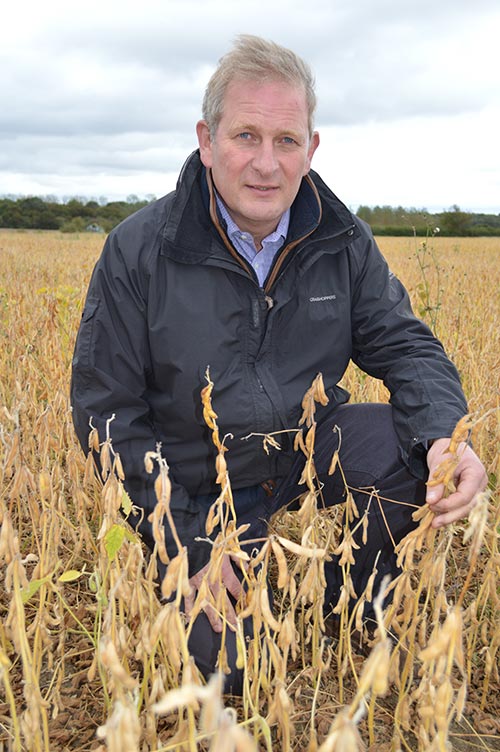 Weed control this season was with pre-emergence pendimethalin (Stomp) and post-emergence with a thifensulfuron-methyl/bentazone (Pinnacle/Basagran) mix. The  fungicide azoxystrobin is used to protect against sclerotinia and three foliar feeds add vital crop nutrition.

Mr Broadhurst emphasises that soya beans are a low-input crop, and they cost him about  £350/ha in variable input costs to grow.

The crop is set to be harvested on about 26 September and desiccation is planned using contact herbicides such as pyraflufen-ethyl (Gozai) and carfentrazone-ethyl (Spotlight Plus), as weed control is vital for the following wheat seed crop.

Soya beans could gain from a hard Brexit

Soya bean growers are likely to benefit from a hard Brexit as other crops could suffer while tariffs may limit French soya bean imports if Britain leaves the EU without a trade deal.

There are currently no tariffs on the 30m tonnes of soya beans imported annually into the EU, and tariffs are seen as unlikely after Brexit on the 3m tonnes that comes into Britain, largely from North and South America.

But in a hard no-deal Brexit, tariffs could be applied to UK wheat exports to Europe and so prices could fall, making soya bean prices and growing the crop more attractive.

Currently, any-origin soya beans from North and South America trade at £330/t while non-genetically modified (GM) beans trade at £375/t. These non-GM soya beans can be grown in Britain or imported from Canada or France.

So the small British non-GM crop could be protected if tariffs are imposed on French imports, says David McNaughton, director of seed supplier Soya UK, which offers buy-back contracts for the crop.

“The harder the Brexit, the better for soya bean growing in the UK,” he says.

The soya bean area slipped this year as many farmers, encouraged by high wheat and barley prices, drilled a big winter wheat crop in the autumn of 2018 and a spring barley crop in early 2019, and all break crop areas including peas, beans linseed and soya beans suffered. 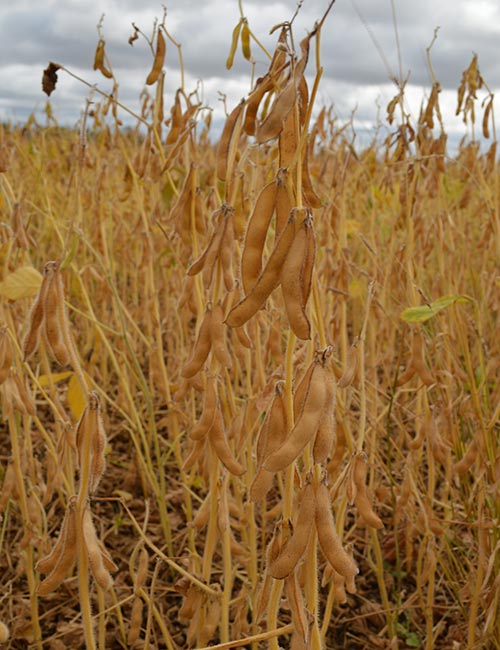 He argues that the soya bean crop has the advantages that it can be drilled late – no earlier than the last week of April – while there is growing list of pre-emergence and post-emergence herbicides to use on the crop.

“It is the best combinable crop to control blackgrass,” he adds

The Ukrainian variety Siverka, which is the main soya bean variety grown in Britain, is a good improvement on older varieties as it has a thick stem for good standing, three or four pods per node, and generally the pods set higher up the stem to allow easier harvesting, Mr McNaughton adds.

The UK crop is used in food ingredients such as flour improvers and soya milk, and also in small batches of specialist animal feed.