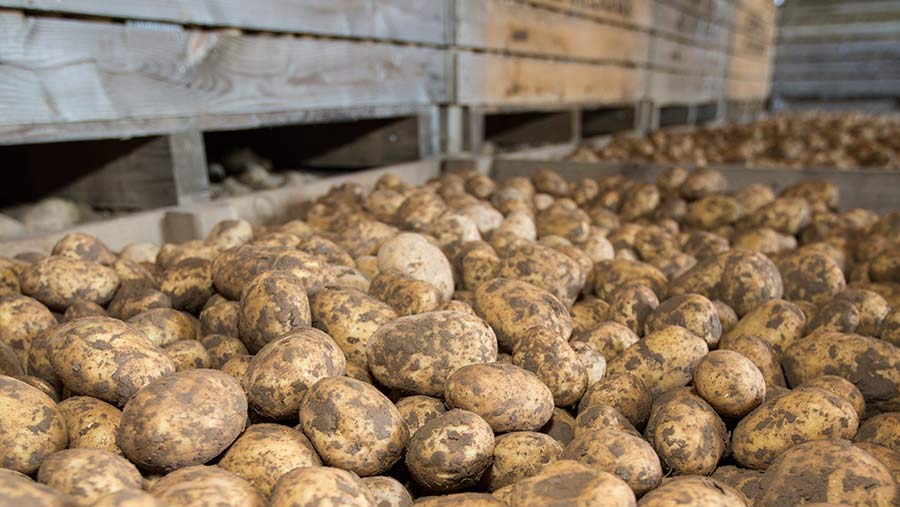 Storage is a crucial part of the potato production cycle, helping growers meet the demand for their crops throughout the year, but if carried out poorly it can be economically disastrous.

About 3.25m tonnes of British potatoes are stored every year and crops can spend as long in the store as they do in the ground.

Done well, potatoes will come out of store in perfect condition meeting processor specifications. However, done badly, tubers can spoil or even rot in stores with losses rapidly mounting up.

To help get things right, the AHDB has updated its Potato Store Managers’ Guide to provide the most recent and comprehensive advice for potato store managers.

Adrian Cunnington, the guide’s author and the head of Sutton Bridge Crop Storage Research, highlights the key updates that will help improve storage practices for the upcoming season and beyond.

Ventilation is the fundamental aspect of potato storage, helping to dry and cool the crop when it is brought into store and remove respiration heat throughout the desired storage period.

A well-designed potato store will have positive and uniform airflow, ensuring there are no hotspots which can lead to condensation build-up and increased risk of bacterial or fungal tuber disease and sprouting.

Good airflow is easiest to achieve in bulk stores, as they are mostly ventilated under the stack.

Air distribution is trickier in box stores. In fact, recent research has identified that in the poorest performing overhead throw systems, as little as 15% of the air discharged over the crop makes it to the end of the building. 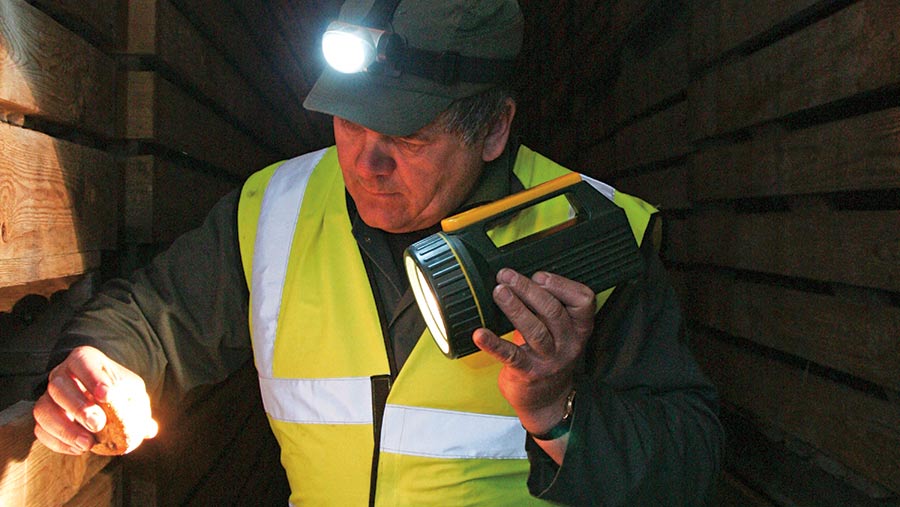 This is because the delivery and return air will always take the path of least resistance, creating shortcuts and a subsequent failure to ventilate the store evenly.

Advances in computer fluid dynamics (CFD) modelling can help farmers design new stores as well as upgrade existing ones to improve airflow. For box stores, farmers are urged to invest in a divider curtain or plenum to separate delivery and return air.

This alone has been shown to provide at least a twofold increase in air reaching the far end of the store.

Air leakage has been identified as a major problem in commercial stores and can scupper the aim of potato storage – to create a controlled environment that keeps tubers in optimum saleable condition.

Leakage from wind-induced ventilation leads to loss of control of the store environment and possible problems include condensation and sprouting.

Combatting these issues through extra ventilation or refrigeration, without fixing the source of the problem, leads to increased running costs and higher tuber weight loss.

A leakage test for stores has been developed, which uses fans to subject the building to a pressure differential of 50 pascals. An AP50 value is generated, expressed in cubic metres of air lost per hour per square metre of building.

An acceptable standard for brand new buildings is ≤3cu m/h/sq m. Older buildings, even if well maintained, are unlikely to achieve this, so ≤10 cu m/h/sq m is a more realistic target.

In a recently completed project, Sutton Bridge researcher Glyn Harper has revisited work carried out in the 1950s on respiration rates in store, where the living tubers use sugars to respire, using oxygen and releasing carbon dioxide and heat.

The old data gave a snapshot in time, but his new research aimed to monitor respiration rates over long-term storage periods and it was found that respiration rates stabilised, particularly at lower temperatures.

For store managers, this means that after the initial curing and temperature pull down, longer-term stored crops might not need the same level of ventilation as first thought, leading to potential efficiency and energy savings.

It is well documented that the potato industry is in the “Be CIPC Compliant” era, with the industry stewardship campaign of that name promoting responsible use of the sprout suppressant chlorpropham to help maintain its availability amid concerns over residue.

Mr Cunnington stresses the increased importance of improving management and control of stores in order to apply suppressants correctly and evenly for maximum efficacy and lower residues.

He adds that taking steps to minimise the need for sprout suppressants is worth considering, such as growing varieties with long tuber dormancy and low-temperature tolerance (for example VR808 and Russet Burbank).

That’s because lower temperatures can reduce sprouting, but can lead to quality issues in less tolerant varieties.

Where feasible, varieties should also be segregated by inherent dormancy into different stores, ensuring that only the tubers requiring sprout suppression are treated.

With continuing concern over the long term availability of CIPC, alternatives should also be considered. Ethylene, maleic hydrazide and spearmint oil are all cleared for use in the UK, but always check market acceptability before application.

This may be particularly useful in 2018, after the hot summer has seen accumulated heat in tubers, causing sprouting in the ridges. This growth can be quickly checked with spearmint oil, for example.

One key factor for store managers is to correctly identify the wide range of storage diseases and defects seen on tubers.

Two skin blemishes that are commonly confused are sliver scurf and black dot, which both affect saleability of potatoes for the fresh market.

Identifying silver scurf by its characteristic silvery sheen is not reliable, so a 10x hand lens should be used to look at the surface of the tuber. If short black thread-like conidiophores are seen, it is silver scurf. These are easily washed off.

Also at 10x magnification, black dot conidia appear as small, dispersed black dots, sometimes as small as a skin cell, and they are not removed by washing.

For silver scurf, warm and damp conditions encourage spread in store, so keeping temperature cool and minimising condensation will reduce the risk of exacerbating the problem.

Although black dot doesn’t spread in store, it can worsen on the surface of affected tubers. Rapid pull-down to the target storage temperature will help slow development. 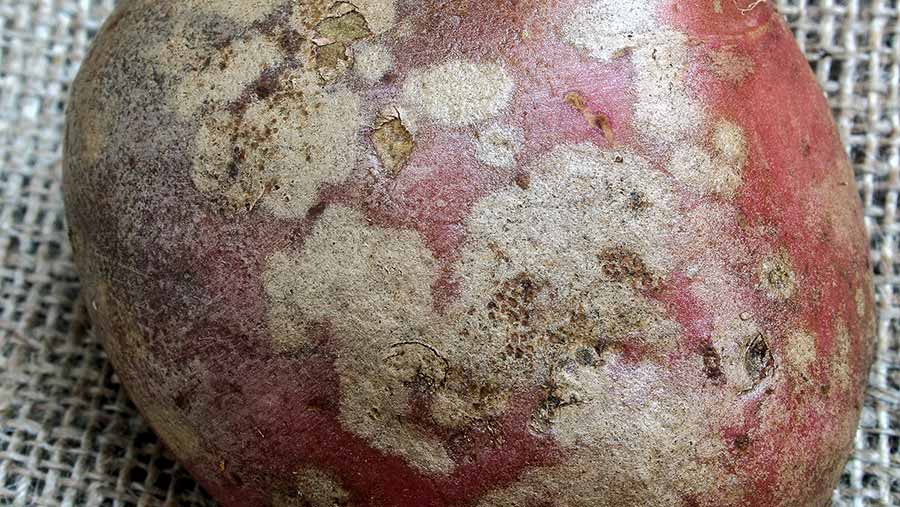 Typical appearance of silver scurf on a potato © Blackthorn Arable

Mr Cunnington also highlights pink rot and watery wound rot as increasing problems and where these are identified at significant levels, infected crops should be removed from store and sold before the rots spread and break down.

Achieving and maintaining the correct storage temperature is crucial for preventing several issues, most notably condensation in store. A condensation period of just one hour can allow a blemish disease to develop or rotting to begin.

Ensuring moisture does not appear in store is important and Mr Cunnington says a key parameter that managers need to get to grips with is in-store temperature fluctuation.

Condensation will occur when warm, moist air comes in to contact with cold surfaces. In store, this most commonly appears on poorly insulated building fabric and this moisture can drip on to the crop.

To avoid this, growers must have accurate control of temperature in store – ideally having fluctuations of +/- 1C or below – and Mr Cunnington stresses the importance of upgrading old stores to achieve this.

For those with long-term plans, consider investing in new, state-of-the-art stores with automatic control systems.

Potatoes can suffer bruising or other physical damage during the harvesting and handling process and these “wounds” need to be healed to minimise fungi and bacteria getting into tubers and causing storage problems.

Potatoes have a natural defence mechanism whereby suberin forms between and below damaged cells, building a barrier to infection. The rate of this wound healing or “curing” is influenced by temperature.

Previous wisdom advised growers to carry out drying and curing and “pull down” to storage target temperature as separate processes, but it is widely accepted that these are now carried out simultaneously.

Research has shown that a process called dry curing – where ambient air is used immediately on crops entering the store to dry, cool and cure at the same time – significantly slows tuber disease development.

Tuber respiration in store produces carbon dioxide, which accumulates in the atmosphere. Allowing this to occur without flushing the store with fresh air can compromise optimum fry colour in processing potatoes, as sugar levels are increased in the stored tubers.

Mr Cunnington says increased awareness of carbon dioxide levels in store is required and store managers should aim to keep levels below 2,500ppm.

Modern automated systems use sensors to monitor levels and purge the gas out of stores when a threshold is breached.

In older stores, simply fitting and running small extractor fans or ventilating the store to allow ambient air in for a short period each day can help reduce the impact of the gas.

However, store managers should be careful that this does not create a condensation problem. 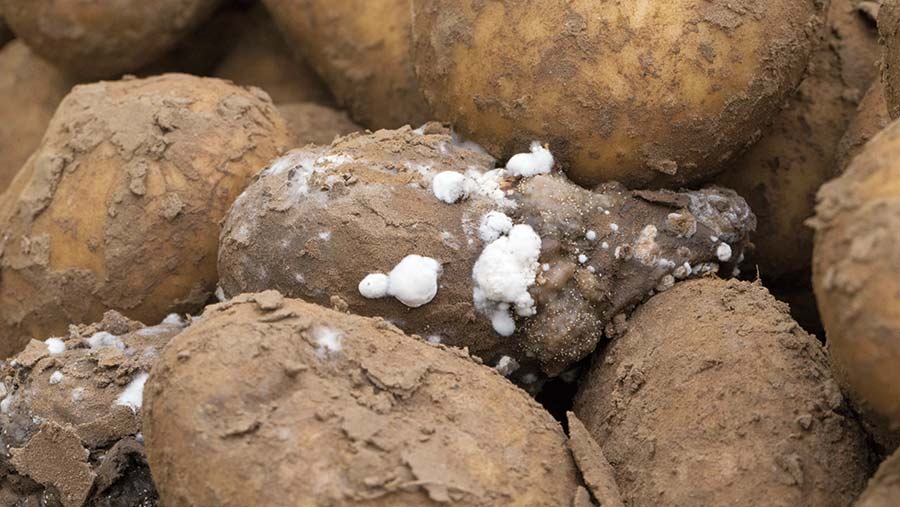 Agriculture continues to hit the headlines regarding work-based accidents, and potato stores are a place where there are many risks. Working at height, slips and trips, lone working and carbon dioxide accumulation are just a handful that need to be mitigated.

Managers are urged to carry out a risk assessment, which is a statutory requirement under health and safety law, and implement measures to reduce the risk posed to those working in and around potato stores.

Stores should be flushed regularly with fresh air to reduce carbon dioxide buildup, not only to protect the crop, but staff too.

Workers should be aware of safe exposure limits, watching out for warning signs such as breathlessness and dizziness or difficulty starting forklift trucks when working in store.

One area that could be significantly improved in UK potato store management is record keeping and the new guide offers some insight into the advantages of maintaining rigorous records.

Without keeping note of aspects such as energy use, it is difficult to get a good handle on storage costs or to show if any changes in management have made a tangible difference to the running of the store.

This article provides only a glimpse of the latest AHDB potato store managers’ guide. You can download a free PDF copy of the full and comprehensive text covering all aspects of potato storage at the AHDB website.