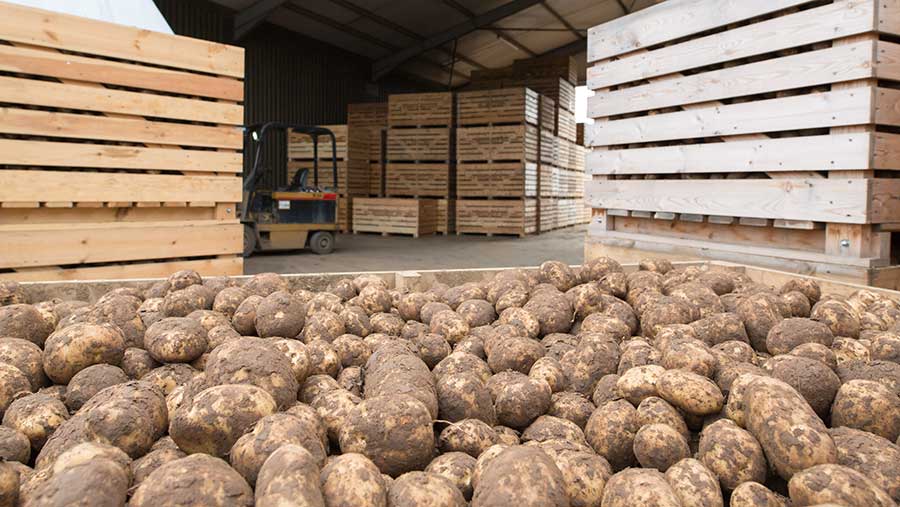 An orange oil product that prevents sprouting in stored potatoes will be available for winter storage to help fill the gap left by the banning of the once widely used chlorpropham (CIPC).

The new product, called Argos, comes from agrochemicals group UPL and is made from a natural substance, d-limonene (terpene), which is extracted from orange peel.

The orange oil is applied as a hot fogging concentrate in store and, when it comes in contact with potatoes, the oil disrupts the growing point of newly emerging sprouts, burning them off and preventing further growth.

With the banning of CIPC, growers have turned to alternatives such as maleic hydrazide (as used in products such as Fazor) – which is applied to potato crops in the field – and in-store options such as spearmint oil and ethylene.

Geoff Hailstone, potato lead for UPL, said the new product will be available from the start of potato storage programmes this autumn and will be competitively priced.

“The orange oil will be very cost-effective compared with alternative in-store options,” he told Farmers Weekly.

The product can be applied as soon as sprouts are seen on potatoes in store and can be used up to nine times in a season. There is no withholding period, so potatoes can be moved out of store 48 hours after the last application, and there is no residue, no smell or taste to the end product.

The orange oil product was approved in the Netherlands and then in Ireland in 2020, and the manufacturer says it has shown favourable performance against spearmint oil and other alternatives.

The European Commission banned chlorpropham in 2019 due to concerns about the risk of eating CIPC-treated potatoes, and the use-up period for the UK ended in late 2020. The product had been used in the UK since the late 1960s.