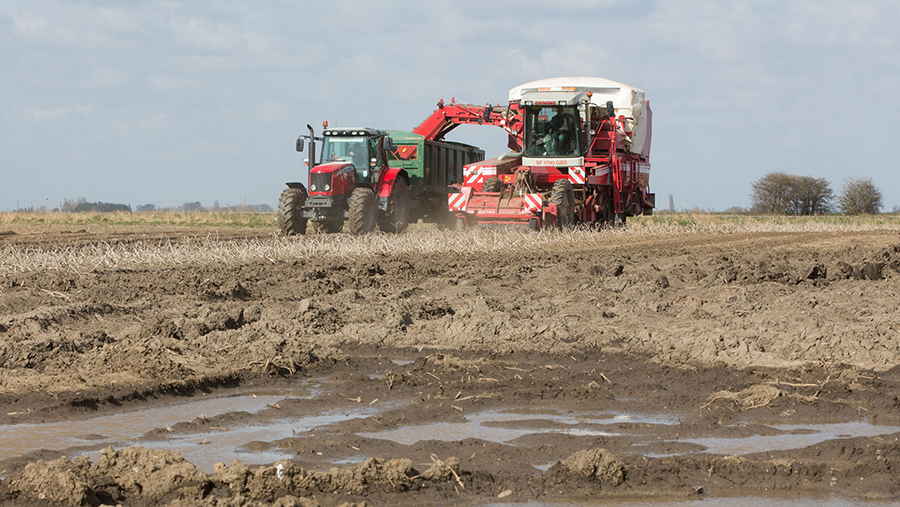 British potato growers have been battling in deluged harvest conditions with saturated and flooded soils halting the lifting process, raising fears that some crops will have to be written off.

According to the latest AHDB figures, northern areas have been the worst affected, with 33% yet to be harvested in the North West.

An estimated 2-3% of the UK’s remaining crop is likely to be abandoned completely due to saturated soils degrading quality, in the wettest year since 2012.

This figure is expected to rise as we head into December, with no sign of weather conditions improving.

AHDB head of arable market intelligence David Eudall explained how the wet weather conditions have been a real struggle for growers.

“Farmers have been working through challenging conditions to harvest potatoes this year, which has been a huge testament to their resilience,” he says.

However, the challenge now lies with farmers who are unable to lift crops, which is having a devastating effect on growers’ cashflows, as well as labour costs since machinery lays idle.

“Financially, it will be a challenging period for those who were unable to lift crops during the drier weather,” says Mr Eudall.

Despite the rainfall, 89% of the total UK crop has now been harvested, with 95% of harvest complete in the East of England.

Farmers are remaining hopeful that remaining crops might be salvageable in the spring once ground conditions improve.

The risk with this strategy is that skin finish and fry colour may be affected, resulting in potatoes having to find alternative market destinations from those which they were originally intended.

“For the remainder of potatoes in the ground, it will remain a question of whether quality will hold up for lifting in the New Year,” he explains.

Growers are advised to monitor drainage and the depth of winter frosts carefully, as these will affect what crops will be salvageable.