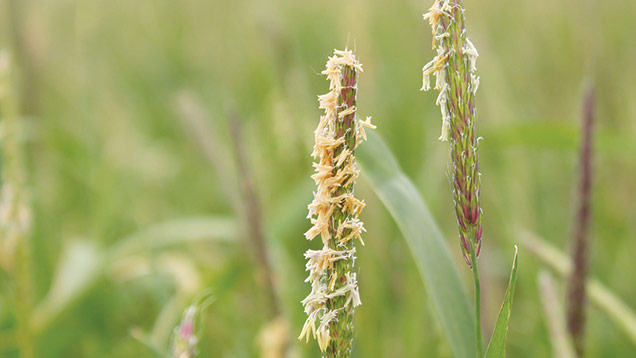 Fast forward 15 years and many key herbicides, including Atlantis, are now only giving up to 20% control at the site, but the good news is that cultural techniques can largely make up for this fall in efficacy.

“There was a belief that chemistry was the solution,” recalls Agrii’s head of agronomy Colin Lloyd. It gave nearly 100% control on an infested site that typically saw 1,500 ears/sq m.

“But even with this high level of control, we could see it wasn’t a long-term solution and that not all the answers would come from the can. Looking around the world, sulfonylureas were being overcome by resistance and there was no reason this would be different,” he says.

“There is no new chemistry on the horizon to reverse its spread. Given that it takes 10 years or more to get a new product approved and that there are no patents for new actives, it will take more than a generation.”
Colin Lloyd

Flufenacet is the only active left at Rookery Farm with no resistance. “We are only getting 5-10% control with fops and dims, while Atlantis achieves 20% kill at best.”

Yields are being severely hit. “Even in 2000, when we were getting full control from spring herbicide applications, we were still seeing 2.5t/ha loss in yield as the weed had already affected crops.”

Looking beyond Rookery Farm, the situation was worsening. Resistant blackgrass had been spreading and in 2009, Rothamsted Research’s Stephen Moss published a map showing 27 counties where resistant blackgrass populations were known.

“In the six years since, it has reached the Welsh borders, down into Devon and into the Scottish borders. Resistant blackgrass now covers the entire wheat belt of the UK,” says Mr Lloyd.

“But there is no new chemistry on the horizon to reverse its spread. Given that it takes 10 years or more to get a new product approved and that there are no patents for new actives, it will take more than a generation.”

One option may be to stack existing residuals and hit the weed with a combination of herbicides. Mr Lloyd stresses that the magic control figure is in the upper 90%, as at this level you start to reduce the seed bank.

Agrii has trialled many different combinations and sequences and stacking residuals could be the answer, says Mr Lloyd. “You can get 98% control, but it comes at a high cost – £150/ha – and you need to question the economics.”

So in 2002, Agrii started conducting cultural trials to find practical solutions. “We went back to Stephen Moss’ work on cultivations.

“The key question was if we could come up with solutions for winter cropping, as that was where the money was. That was why we wanted to monitor blackgrass in a typical heavy land winter wheat-winter oilseed rape rotation (two or three wheats followed by OSR).”

The cultural trials kicked off in year one by looking at six different approaches – deep ploughing, direct drilling early and later, one-pass deep discs and tines (mirroring the approach taken by many farmers), shallow cultivation with discs plus the German system of two passes with discs and tines.

“With ploughing, we saw marked results, with 98% control of blackgrass. The farm had been min-tilled for eight to nine years, so seed was being kept in the germination zone,” explains Mr Lloyd.

With the min-till treatment, there was still a lot of blackgrass. The deep pass also gave good control by moving seed out of the germination zone, but gave more mixed results in subsequent years.

In year two, the trials went into oilseed rape, with the area split in two – half ploughed and the other half direct drilled. However, ploughing a second time gave the highest number of blackgrass plants.

“So if you do it [plough] again, you bring seed back up. It highlights the need for a rotational ploughing strategy. Similarly, deep cultivations also brought seed back up.”

The first three years of data show the best approach for maximising yields. The lowest seed return is clearly seen in a cultivation sequence with deep ploughing to bury the seed followed by shallow cultivations. This gave a bread wheat yield of 7.21t/ha.

This compared with 4.23t/ha for continuous direct drilling, while ploughing followed by early drilling in all three years was even worse at 3.51t/ha.

“This demonstrates that you cannot plough your way out of trouble. And it is unlikely you can direct drill out of trouble, particularly when drilling early.”

The next big one is delayed drilling. Drilling in the second week of October instead of the third week of September typically reduces numbers by another 50%. Importantly, it can also help overcome mistakes.

For example, if you plough and then plough again, this wrong can be righted by delayed drilling. In 2013, delayed drilling after two years of ploughing resulted in 28 heads of blackgrass/sq m against the 403/sq m in the control plots (93% control), giving a yield of 8.56 t/ha compared with just 2.89 t/ha.

Similarly, in plots that were only direct drilled for the three years, we saw 83% control with late drilling versus 35% with early drilling – the only difference being drilling date. “So even with a shallow cultivation system, delayed drilling offers some control,” says Mr Lloyd.

But getting the message across is difficult. “Many farmers say they can’t drill late on heavy land, like that at Stow Longa. Crops are gappy, as the drill type is not ideal for this situation.

“It’s a catch 22, as blackgrass numbers are lower [when later drilled], but so too is yield.”

He suggests farmers need to be more proactive. “If conditions are not right for winter drilling success, there must be a point when you consider spring wheat rather than drill late and do it badly.”

There were big differences in blackgrass seed return, with 212 ears/sq m for early-drilled crops, 18 ears/sq m for late-drilled and no blackgrass ears for spring wheat. When looking at the economics, margins rose from £389/ha to £903/ha just by drilling three weeks later. Further delaying to spring resulted in a margin of £729/ha.

“With early drilling, you are not only losing money, but also seeing a seed return of 20,000/sq m. The seed return fell to 1,800/sq m with later drilling and you are now making money, while spring wheat made money and had no blackgrass seed return,” he explains.

But he warns it is not as simple as growing a spring wheat. “In fact, some farmers adopting spring wheat have seen much more blackgrass in crops.”

This is due to soil disturbance in spring, stimulating a flush of blackgrass. This prompted Agrii to look at Claydon drilling with a narrower point to cause less disruption of the soil.

Agrii’s Steve Corbett adds: “It is about planting seed, not recultivating soil, or you will get second chit in the spring.”

Work on seed rates and varieties started in 2004. “The question we wanted to address is whether all wheats are the same, or whether some are less or more competitive. And whether you should up rates to increase competition to smother out the weed,” says Mr Lloyd.

“There was little data when we started out, but when walking fields in the early years, we noticed big differences between Hereward and Robigus. So why was there more blackgrass plants despite plots receiving the same chemistry.

“Our paired and replicated trial plots allow us to give all varieties a competitive score, to identify those to avoid in badly infested fields. Very competitive varieties include Group 2 Lili and Edgar [German E wheat].”

In conclusion, Mr Lloyd says the 15 years of trials show blackgrass control is possible. “It is not an easy option, but the right combination of cultural controls can get you out of trouble.

“In the same field and with the same population of blackgrass, we are seeing plots with no, little or a lot of blackgrass side by side and it is all down to the cultural approach taken.

“We are now bringing control back to the same 90%-plus levels we had when Atlantis was working.”

He urges farmers to consider ploughing, stale seed-bed, drilling date, variety and seed rate before they even think about chemistry.

I’ve fallowed/doubled fallowed a field before establishing a first wheat, but I am still seeing high levels of blackgrass. What have I done wrong?

Even if you fallow an area, you may still see high numbers if you don’t take measures such as delayed drilling or ploughing. It is a numbers game and in badly infested areas the seed bank is likely to be very high and spread across the soil profile, so it can take many years to deplete.

I have introduced a spring crop into the rotation, but I am still seeing high numbers of blackgrass in spring crops. Why?

The key factor is to avoid disturbance of the soil in the spring, as this sets off a second chit. The best approach is to do the cultivations in the preceding autumn and then direct drill using low-disturbance points.

I’ve done the wrong thing and have been forced to plough for a second year running to tackle compaction. Is there anything I can do?

I have opted for delayed drilling, but conditions have turned against me. Should I drill anyway, as surely any winter crop is still better than a spring crop?

There will come a point when a spring crop will give a better margin if establishment is poor. More importantly, spring drilling will see a much lower seed return, but you have to avoid soil disturbance to avoid a second flush.