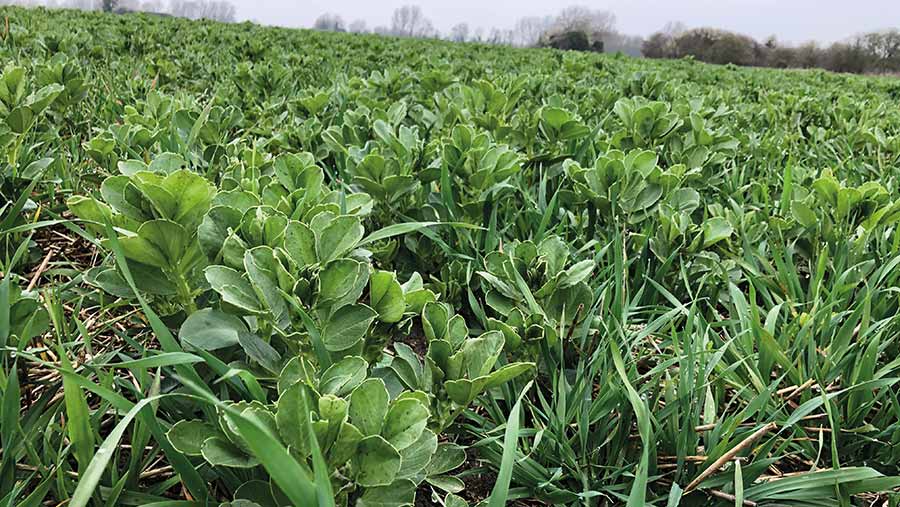 Growing a simultaneous crop of beans and oats enabled one Cambridgeshire grower to completely eliminate fertiliser, fungicide and herbicide applications as well as increase land use efficiency.

The intention was for the nitrogen-fixing beans to aid cereal growth, with the oats protecting the beans against weed and disease attack.

Mr White notes that the two crops grew well together, preventing the build-up of specific weed and disease populations which would otherwise take hold in monocrop situations.

This ultimately lead to greater output, with an increased gross margin and land use efficiency ratio. 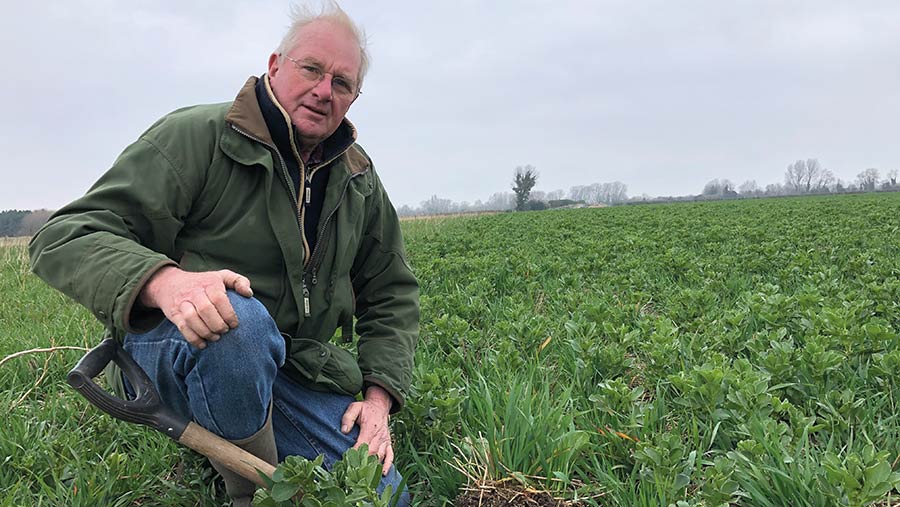 The “boat” mix was sown at a total rate of 300kg/ha, with five parts beans to one part oats. The spring bean variety Vertigo was drilled at 250kg/ha and Elyan oats were planted at 50kg/ha.

A Horsch Avatar disc drill was used to prevent as much soil disturbance as possible to avoid weed populations taking hold.

When it came to harvest, Mr White had no trouble with crops ripening at different stages, so cutting was pretty straightforward.

He feared the beans would be later to ripen than the oats, potentially contaminating cereal quality with their high moisture content. However, he was pleasantly surprised this was not the case. 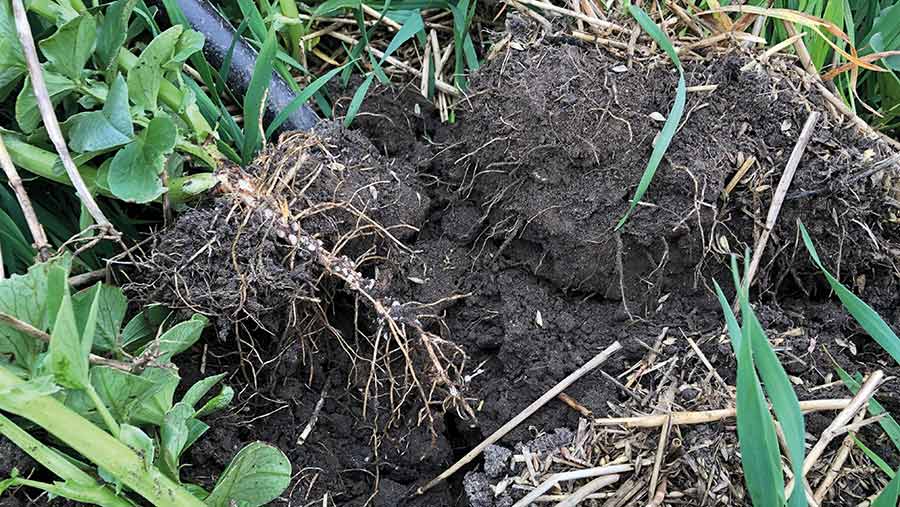 “The two crops seemed to sink together in their growth stages. This meant the beans ripened sooner than the monocrop of beans I also planted,” he says.

Mr White says the final bicrop yield was not reflective of the initial seed rate, which saw a significantly higher proportion of oats harvested, despite the beans being planted at a higher seed rate.

He suspects this is because the oats had a more vigorous establishment and so outcompeted the beans.

What’s more, the leguminous crop would have aided development of the oats, allowing greater tillering and, consequently, yield.

An old seed dresser dating back to the 1950s was then used to separate the beans and oats.

“This was an effective, but rather time-consuming process,” Mr White says.

As he looks to scale up the area grown, he will need to find an alternative separation method. 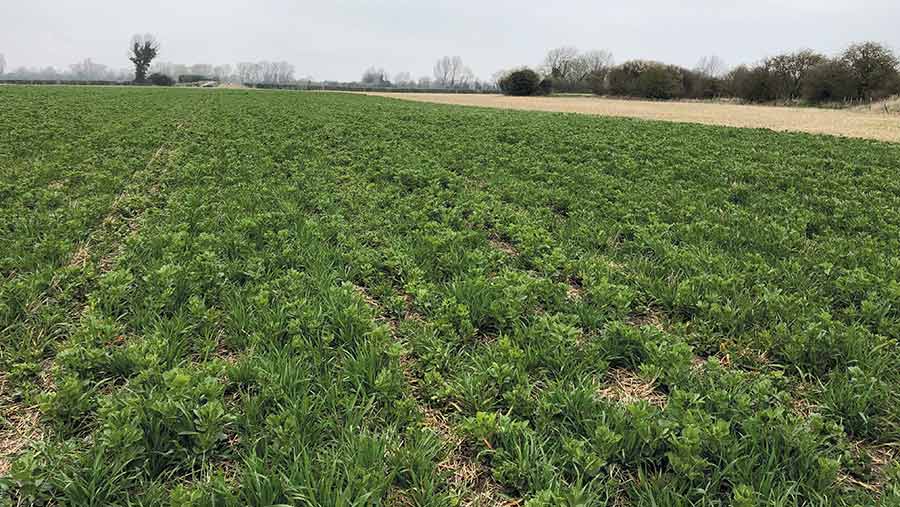 The bicrop was grown virtually organically with no herbicide fungicide, fertiliser or biostimulant sprays, saving £61.37/ha, with a higher land use efficiency ratio of 1.3:1.

He says the only exception was 3 litres/ha of glyphosate that was applied to the seed-bed before drilling to remove weed threats, at a cost of £14.40/ha.

The bean seed dressing was also dropped in the bicrop, which saved a further £8/ha. Accounting for the extra oat seed spend of £7.25/ha, an overall saving of £62.12/ha was made.

This season, Mr White has planted both winter and spring “boat” crops.

In his winter mix he planted Tundra winter beans at 40 seeds/sq m and Mascani winter oats at two different oat seed rates of 200 and 125 seeds sq/m (see two pictures below). 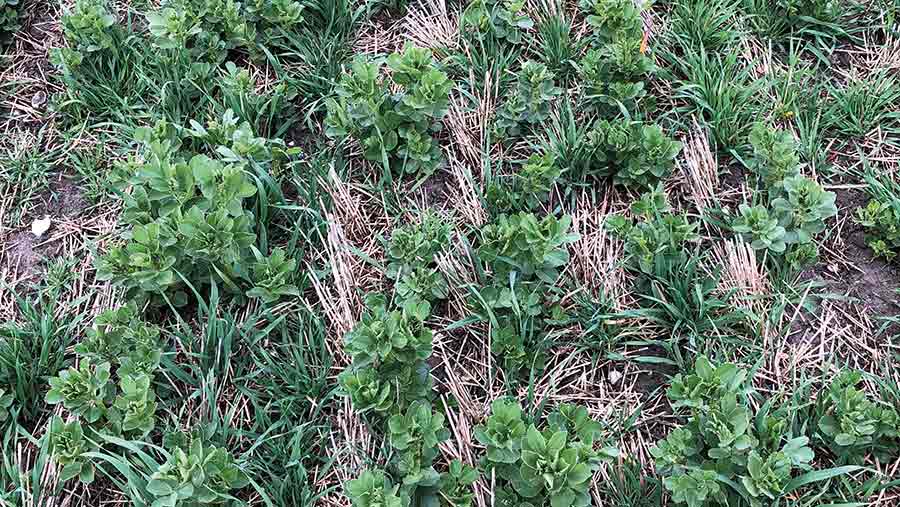 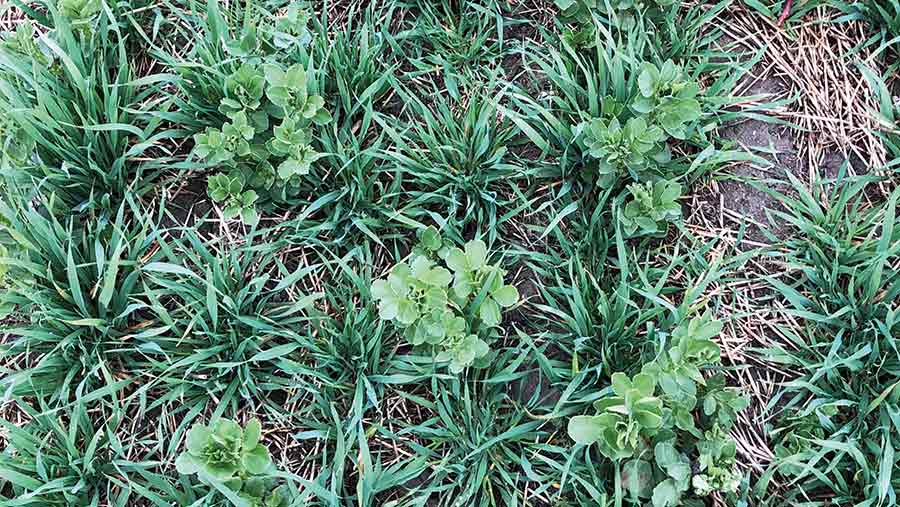 As beans are dicotyledonous plants, broad-leaved herbicide sprays cannot be used in the crop, which places greater importance on crop establishment and weed control.

“A clean start to the seed-bed is, therefore, crucial when it comes to weed control, as beans prevent the use of broad-leaved herbicides, but they offer good capabilities to reduce weed competition for the oat crop.

“It’s important to remember that nature feels gaps and if there is a gap in the ground cover, something will grow in its place, whether that is a weed or crop.”

It’s the diversity of bicropping that helps to reduce weed populations taking hold.”

Despite this, he highlights a light scattering of weeds such as bromes are present, noticeably more than his spring crop last year.

This is because autumn crops are often slower to establish, which provides a window of opportunity for weeds to germinate.

Another contributing factor was the prior establishment of two winter wheat crops. Mr White usually avoids growing the same crop in a row to prevent a build-up of certain weeds.

However, with two difficult autumns preventing many growers from drilling winter wheat, the decision was made to grow two consecutive wheats.

“Weeds would have otherwise been controlled rotationally through spring cropping, which is why the field will go to spring barley next year.”

Spring “boats” have also made a reappearance, using the same seed rate as last year.

However, this season Mr White has trialled planting the crop in alternate rows, which he believes could provide beans with additional establishment space and reduce potential oat competition.

Thanks to his Horsch Avatar drill, which has three different seed tank options, he is able to tinker with seed rates and row planting options to help identify the optimal drilling practice for his soils.

Lack of rain is often the main limiting factor for yields at Hawk Mill Farm, with just 575mm of rainfall last year.

With a focus on regenerative agriculture and a drive to cut back on inputs, he hopes to make his farm more drought-tolerant by using direct drilling, cover and catch cropping.

“We can’t control nature, but we can control the amount of moisture our soils retain.

“This is why we’ve been working towards regenerative agriculture to provide structure and organic matter to our sandy soils, which are prone to slumping,” he says.