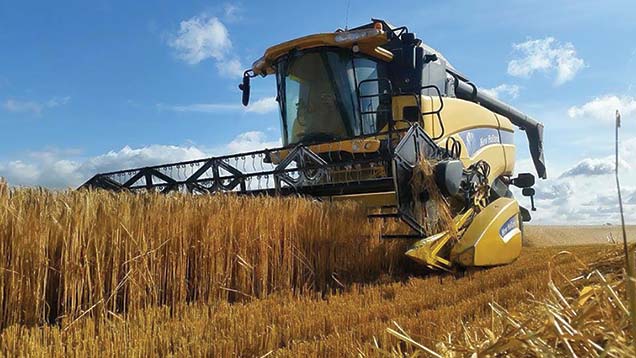 Wet weather is delaying harvest across much of the UK, although early yields of winter barley and oilseed rape look promising.

In Wiltshire, James Dean finished combining winter barley by 22 July at Church Farms, Porton, Salisbury. “We cut 200ha of Cassata at between 14% and 16% moisture, which averaged 8.6t/ha,” he says.

Mr Dean has also cut 200ha of Harper and Quartz oilseed rape at a yield of 4.3t/ha, with 100ha of Holl rapeseed averaging 4t/ha.

Further north, Sandy Walker had just started cutting winter barley at Ercall Park, Telford, Shropshire. So far he has cut 30ha of Cassata, which has averaged 9.1t/ha, leaving 60ha left to do.

“I have got 160ha of Cubic and Harper oilseed rape which I am hoping to start harvesting at the end of next week,” he says.

“Yields have varied, some have done exceptionally well with a better average than last year and bushel weights coming in around 68-70kg/hl,” he says.

Mr Swinson sprayed off 350ha of Extrovert, Compass and Campus oilseed rape two weeks ago, although combining is on hold until the weather improved.

His 130ha of Cassia feed and Flagon malting barley has come off at around 13-14.5% moisture.

Although there was a good quantity of straw, yields ranged from about 6t/ha on lighter land to 7.5t/ha on better land, and nitrogen levels were very low at 1.4%.

“I have 16ha of Charger oilseed rape to cut which is a greatly reduced amount from normal. It was sprayed off two weeks ago, so I am hoping to cut it early next week, he says.

Further south, Jonathan Tipples’ oilseed rape harvest was under way at Reed Court Farm, Marden, Kent. So far he has cut 50ha, leaving another 20ha, which he hopes to finish by the end of the week.

“We grew Incentive which has averaged around 4t/ha so far. When we started harvest moisture was at 10.5% but it went down to 6.5%. We’ve got flea beetles everywhere – it’s not very promising for this autumn’s crop,” he adds.

Mr Tipples was hoping to start cutting Panorama winter wheat at the end of the week. “It looks a bit average – I don’t think it will be anything special,” he adds.

On the south coast, winter barley yields were slightly above average at about 9-10t/ha, says Mike Clay at Hampshire Grain.

“So far we have had about 60-70% of the feed crop in at around 16-17% moisture but we have had some mixed samples, especially off the lighter land,” he adds.

Oilseed rape was just starting to come in, showing good quality with oil contents around 45-46% and averaging 11% moisture.

* Upload your pictures to our Harvest 2015 gallery