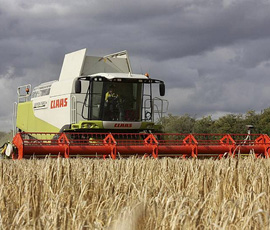 Farmers have less than 5% of their crops left to harvest across the UK, but in Scotland there is still 40% of the wheat and 20% of the spring barley to cut.

In the week to Tuesday (25 September), farmers combined about a third of the remaining crops, with shorter days and changeable weather limiting harvesting time, said the latest ADAS report.

As well as wheat and spring barley, farmers in Scotland had about 75% of spring oats to cut, with minor areas of break crops left to gather across the UK.

Wheat yields were 10-15% below average, at 6.8-7.2t/ha, with cleaning and drying of samples likely to see further reductions in weight, said the report.

“Harvest is close to completion with only an estimated 60,000ha left, predominantly in Scotland and north of England, although there are still crops elsewhere on the higher land and in wet patches of fields that may prove impossible to harvest following the latest rain.”

Spring barley harvest was one of the latest in recent years, with yields in Northern and Eastern Scotland proving better than elsewhere in the country.

Yields in North West and North East England were also better than expected, with the overall UK yield expected to average 5.1-5.3t/ha.

“However, with low specific weights the actual marketable yield will be reduced.”

Oat harvest had made little progress over the past week, with most of the remaining crop being spring planted in Northern England, Scotland and Wales, said the report.

Many crops were still green in the ear and straw, and the combined winter and spring yield was likely to be close to average at 5.5-5.7t/ha.

With small areas of spring oilseed rape to harvest in Northern England, ADAS estimated average yields to be a disappointing 2t/ha.