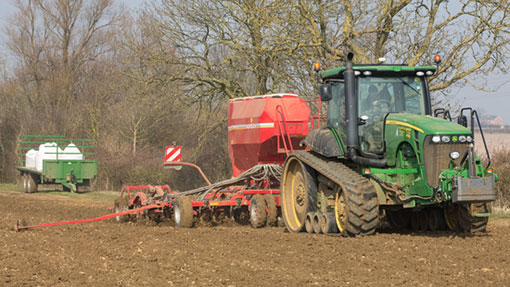 Growing spring barley can help cut blackgrass levels by up to 98% and should be considered even if it means taking a hit on yield.

Any spring cropping gives the option of autumn control of this grassweed, but spring barley is also highly competitive with spring-germinating blackgrass.

Growers opting for spring cropping must make every effort to get on top of this pernicious weed, says Dick Neale, technical manager at agronomy and distribution group Hutchinsons.

“It’s worth a bit of short-term pain for the long-term benefits of reducing blackgrass populations,” he says.

Last season, one commercial field at the group’s blackgrass centre near Brampton in Cambridgeshire achieved 98% control of the troublesome grassweed by growing spring barley.

Although spring barley is traditionally a light-land crop, if it is grown on heavier soil where blackgrass is more of an issue, some changes to management may be needed.

Mr Neale suggests that restricting soil disturbance to the top 50mm is key to controlling blackgrass, and says a machine such as the Cousins Surface cultivator offers an effective answer across most soil types.

The machine’s tines work to 50mm, which retains organic matter near the surface, encourages weeds to germinate in the top layer and leaves seeds at lower levels undisturbed.

A single pass with a stubble rake in early to mid-March can stimulate blackgrass germination, which can be sprayed off with glyphosate herbicide.

Then the pre-emergence herbicide flufenacet should form the backbone of any blackgrass control strategy, he says.

Mr Neale adds that although spring barley grown on light, sandy soils will not normally need a high input of plant growth regulators, crops grown on heavier soil may need this treatment.

“It’s all about developing a tailored agronomic package that delivers both weed control and a commercial crop from land that may not traditionally have been suited to growing spring barley,” he says.