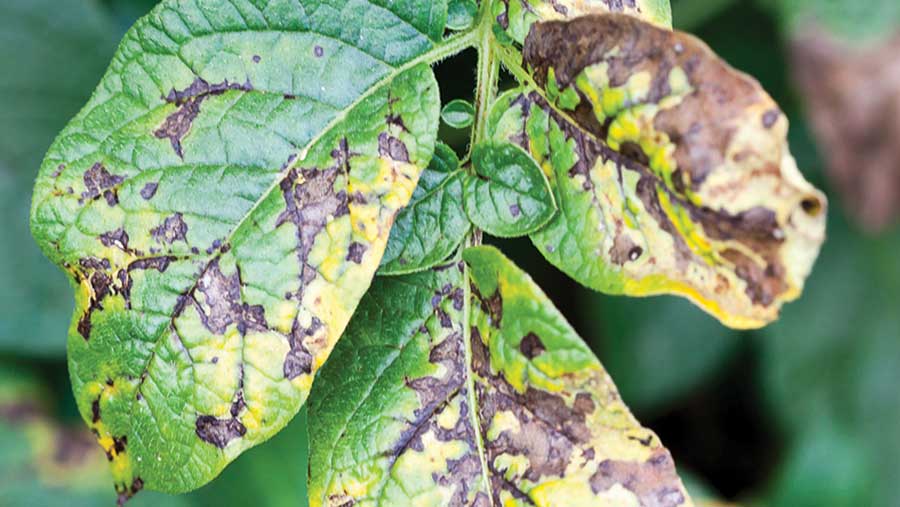 The risk of alternaria outbreaks in British potato crops is increasing and should be considered as growers formulate their disease control strategies this spring.

There are two main alternaria species that cause early blight – the most prevalent is the more aggressive Alternaria solani, and the second, Alternaria alternata, which is thought to be less damaging to yield.

A third – Alternaria tenuissima – has recently been tentatively identified, but very little is known about its frequency and potential impact on potato production.

The pathogens favour hot and dry periods, alternating with wet spells, which aids the spread of spores and is conducive to infection. A. alternata tends to appear early around May, while A. solani tends to get going from late-July onwards and maintains activity through until early October.

Experts believe an increasing area of susceptible varieties, combined with falling use of alternaria-active fungicides in late-blight programmes, are to blame for the increase, exacerbated by a shift to warmer summers.

“It used to be a rarity, but now seems more common and levels can be severe. So far we aren’t sure of its impact on production, but in other countries it’s reputed to be significant,” she explains.

Peter Blaylock, agronomist at potato supplier E Park & Sons, says, in his experience, severe epidemics can cause yield losses of 30-50%, as plants “just pack up” after infection.

He adds that stressed plants are more susceptible, particularly where nutritionally compromised, infested with potato cyst nematode or suffering from drought.

“It is a stealth-like, opportunistic disease. You might get a hot, dry, sunny spell that dries out phytophthora [late blight], but it triggers alternaria infection.

“I think agronomists are failing to spot early symptoms that often look like micronutrient deficiency. A lack of understanding has allowed it to establish in crops,” he adds.

Reducing the reservoir of Alternaria inoculum can be done culturally and Dr Thomas says removing infected haulm and weed hosts, such as nightshade, across the rotation is crucial.

“Reducing crop stress is also important; so correct cultivation [to minimise compaction], irrigation scheduling and nutrition planning helps to reduce the risk of infection,” she explains.

Mr Blaylock adds that while little is known about potential carryover on seed, ensuring you use good-quality, certified seed could also help reduce infection risk.

The absence of alternaria-active late blight fungicides, such as multisite protectant mancozeb, in spray programmes is a trend experts agree needs to be reversed to help protect against the disease.

Pam Chambers of UPL Europe says resistance to strobilurins and SDHI boscalid have been confirmed in US and European A. solani populations – all popular and still-effective fungicides used to control the disease in the UK.

However, work carried out by Netherlands-based Wageningen University, on behalf of UPL Europe, showed no shift in sensitivity to mancozeb in European A. solani isolates collected between 2000 and 2014.

“This would reinforce the idea that multisite protectant fungicides are an important part of the programme for both disease control and resistance management to protect other crucial chemistry,” adds Ms Chambers.

Mr Blaylock says that mancozeb is an old molecule and people have switched to newer chemistry for blight control in recent years and are now falling foul of that move.

“You need to start thinking about integrating alternaria control into the programme early to cover the threat. Mancozeb is good against alternaria and is also a good source of manganese and zinc,” he explains.

While mancozeb has good protectant activity, in higher-risk situations it can be alternated with specific products that show the strongest alternaria activity according to the latest EuroBlight fungicide ratings (see table below).

Mr Blaylock says slotting a more active product into the third late blight spray as the rapid canopy phase begins and again with the sixth spray is a sensible approach.

“That is a broad recommendation, but you may need to react more quickly if the disease is already there,” he adds.