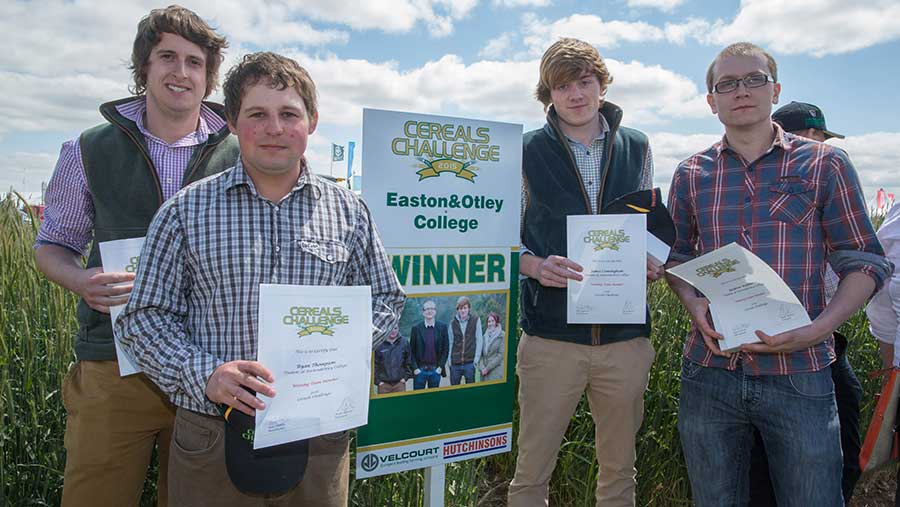 Six teams of hopeful students will competing against each other for the prestigious Cereals Challenge, by growing a pea crop of their choice with the highest yield, quality and profit margin.

Easton & Otley College will be attempting the complete a trio of back-to-back victories, after winning for the second year running in 2015, taking home a trophy and £1,000 to share, plus £500 for their college.

The student teams have each been handed a plot to grow their crop of peas from drilling through to the final judging during the 2016 Cereals event at Chrishall Grange farm in Cambridgeshire.

They will be judged on their agronomic recommendations, input cost management, estimated crop yield and quality, as well as the marketing of the crop.

Jackson Maplethorpe, who was captain of last year’s runner-up team Riseholme College, said: “We have chosen to grow a crop of Sakura marrowfat peas, which we are planning to drill mid-March at a rate of 315kg/ha and a depth of 5cm.

“We will roll the soil straight after drilling and apply our chosen pre-emergence herbicide then, as we have learned that getting the establishment right will be key to producing a quality crop.”

As real time agronomists, the students will need to plan their input and management programmes according to the needs of the crop within the challenges of the season and environment, but also to justify these recommendations with an eye on the final gross margin.

The six teams each hoping to win the 2016 Cereals Challenge.

Since the challenge was launched seven years ago, Hutchinsons has taken on five students into their agronomy foundation training programme and Velcourt has employed six students as farm managers. Both companies sponsor the competition.

Keep up to date with the 2016 Cereals Challenge by following @CerealChallenge on Twitter.

The Cereals event is being held on 15 and 26 June this year – for more information visit the Cereals website.