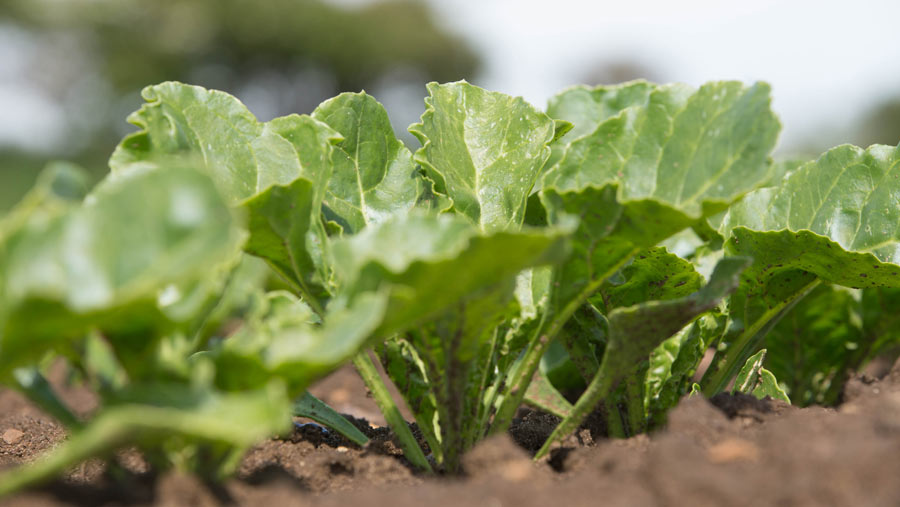 Significant cold weather in January and February has increased the likelihood that the emergency derogation for the use of a neonicotinoid seed treatment to control virus yellows in sugar beet will not be triggered this season.

The derogation is based on a Rothamsted virus model predicting that over 9% of the sugar beet crop will be infected with virus yellows by the end of August. It uses a combination of winter temperatures with aphid population dynamics to make a forecast on 1 March.

A preliminary forecast released by the British Beet Research Organisation (BBRO) said there was now only a 16% chance that the 9% threshold will be reached when the final forecast is made. By contrast, last season the model predicted that 70-90% of the crop would be affected by virus yellows.

“As 2021 is colder, there will likely be a greater suppression of aphid numbers than in 2018. A mild spell during the remainder of February will have a relatively small impact on virus levels, as aphid populations have already been affected by the cold.”

As well as reducing the number of aphids, the cold weather will also delay first flights and their peak.

Last season first flights were in late March as many beet crops were emerging; this season that will likely be delayed until late May or early June, with the peak not until the end of June or early July compared with mid-May.

That will mean beet crops are likely to be at a more mature growth stage compared with the young, highly susceptible stage in 2020 when aphids arrive, the bulletin adds.

“If the neonicotinoid derogation is not triggered, this advanced growth stage, plus the use of foliar insecticides where required, will be key to controlling virus transmission.”

One consequence of the delayed decision over whether the derogation will be triggered is those opting to have seed potentially treated with the neonicotinoid Cruiser SB (thiamethoxam) will likely have their seed orders further delayed by two weeks.

Seed ordered with Cruiser SB will now be delivered from mid-March into early April rather than from the end of February as previously communicated by British Sugar. Orders for non-neonic treated seed should be delivered in February.

BBRO data suggests highest yields come from drilling sugar beet in March, with around a 6-8% yield penalty from delaying drilling into mid-April.

The bulletin points out on later drilled land crops will be younger and more susceptible at the time of the later 2021 migration so will need careful monitoring and management for aphids.

Further emergency authorisations are being sought for two foliar insecticides to supplement the authorised single application of Teppeki (flonicamid).

“Arguably cold weather, particularly hard frosts, is by far the best and cheapest insecticide,” he said.

Growers had the option of amending their seed order earlier this month, but it unclear if following the latest update growers can further amend orders.

Tim Young, who grows 30ha of beet near Hockwold in Norfolk, was one who hedged his bets.

“Last year average temperatures were 9C in January and February, while the year before they were around 4.5C, and we didn’t have the impact from aphids.

“As the temperatures are down this year I feel the risk of growing without neonics is lower. So I’ve ordered seed with bolting resistance without Cruiser SB, and with the higher-yielding, later variety I’ve kept Cruiser on.”

Some of his soils are sand over chalk where he says getting the crop drilled in March is important. “On that land I don’t want to be waiting for seed.”

However, David Hoyles, who farms near Long Sutton and was severely hit by virus yellows last season, didn’t change his order. “Our land is wetter currently than it was last season, when we didn’t get any beet drilled before the end of March, so I just didn’t see any chance we would start before then.”