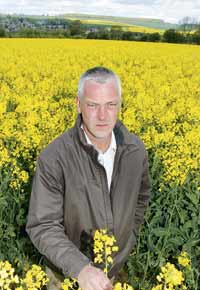 One pass systems were a cost-effective method of establishing the crop, but growers should take time to consider the most suitable system for their farm, he said. “You need to choose the system that best suits your soil type, and planting date – there is not a one size fits all solution.”

Traditional plough-based systems were typically a three-pass process, which made them an expensive option and moisture loss was often a problem, he noted.

Trials at the Wakerley site compared a number of one-pass tillage and seeder systems from Sumo, Simba, Opico and Vaderstad.

Sowing in narrow bands of about 30cm was Mr Bennett’s preferred technique for seed placement. “Bands give the plant space to branch out, but if they are too wide, some varieties will not be able to form a complete canopy.”

For growers planting at 50cm band spacing, hybrid varieties were the best option as they bridged the gap between rows to form a complete canopy, he said.

Seed-rates should be dropped to 40 seeds/sq m when band sowing to prevent competition between plants within the row. “If seed-rates are too high plants will not be able to branch along the rows and you will get linear populations with thin stems.” This increased the risk of phoma attack and lodging, he pointed out.

Tined implements that worked the soil at depth created an open soil structure which promoted root development, but it was also important to create a shallow tilth to place the seed, he said. “Planting in a good seed-bed achieves good seed to soil contact and allows the seed to be placed at the optimum depth.”

Subsoiler-seeder systems could be effective, but growers needed to be careful in wet conditions, he said. “Last season, when soils were cold, plastic and slumped, subsoiler legs cut a slice through soils rather than restructuring them.”

Trash management was crucial with one pass systems as excessive material on the soil surface could prevent good seed to soil contact, he said.

Lack of spring rainfall meant applied nitrogen had not been taken up effectively in many crops, said Velcourt’s Keith Norman. “If there isn’t enough nitrogen, the crop will be forced to drag protein from leaves.”

There could be a late flush of nitrogen when rainfall increased and washed fertiliser into the soil, however, the extent of this was hard to predict, he explained.

Research carried out by the firm showed adding phosphate in the autumn substantially boosted crop health and improved yield potential, said Mr Norman. Trials adding 25, 50 or 75kg/ha phosphate to index two fields in the autumn significantly improved the physiological state of the crop, although the difference between rates was marginal.

“There were many benefits including greater plant density, a larger number of plants per square metre and improved crop branching,” he said.

Phosphate is an immobile substance so it is most effective to apply it on the seed-bed at the time of planting or drill it in with the seed, he added. “We are carrying out further trials with granular and foliar phosphate to see which gives the greatest performance increase.”

When the same quantities were applied in the spring the benefit was far less pronounced, he added.

Hybrid oilseed rape offered a 5% yield advantage over conventional varieties, according to a recent Openfield survey.

Improved vigour and establishment in the autumn helped hybrid cultivars achieve a 0.19t/ha yield premium over traditional varieties, said seed manager Paul Taylor. “This is worth an extra £50-60/ha and more than covers the extra seed costs.”

Data was collated from 160 Openfield member farmers representing more than 12,500ha of rape production across the country, he said. “Autumn vigour was the biggest reason growers gave for growing hybrids, but 81% also reported improved spring vigour.”

Hybrids accounted for 61% of the total rape area and almost 20% of farmers grew “wall-to-wall” hybrids, he said.