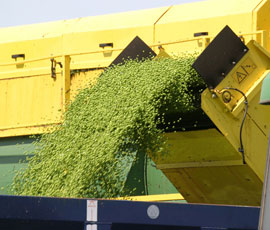 Vining pea yields have been cut by more than 40% after the wettest summer for 100 years hammered the crop and left growers struggling with poor conditions at harvest.

Just 55% of the expected yield has been achieved, according to James Hallet, CEO at British Growers.

“The unprecedented combination of high rainfall and minimal sunshine in May, June and July means the great British weather has proven insurmountable this season, with harvesters struggling in swamp-like fields.”

In the Scottish borders, Colin McGregor has seen about 25% reduction in his pea crop and early harvesting was a struggle.

“The poor weather really has done for most crops, and peas haven’t escaped either,” Mr McGregor said.

“Quality has been fine, but the lack of sunshine and the 22in of rain we had over the five months through spring and early summer, have taken their toll.”

Just north of Boston, Lincolnshire, pea grower Stuart Grant has also had a disappointing season across the 360ha he grows. “The early season peas got wet at flowering, much like the wheat, resulting in a lot of straw but fewer pods,” he told Farmers Weekly.

“The mid season fared even worse, with very poor yields. It then picked up for the late crops, but some growers in the area had to write off theirs’ completely.

“The worst-affected farms locally would only have achieved 40% of their usual tonnage, and even the best would only be getting 70%. It’s a real disaster as we work on a fixed price, I don’t think pea growers will be making much money this year at all,” said Mr Grant.

“The supermarkets need to understand the difficulties that growers face and adjust prices accordingly,” he added.