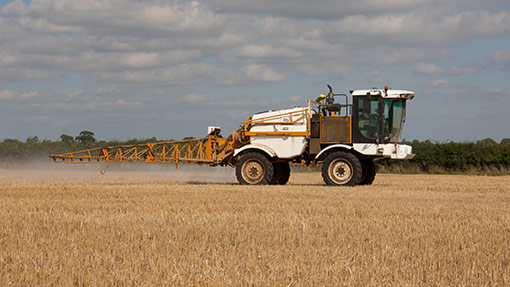 Growers are advised to take full advantage of an early harvest and decent soil moisture to maximise pre-drilling control of problem grassweeds.

This year there have been serious infestations – not only of the well-documented blackgrass, but also of ryegrass and bromes in many winter cereal crops.

With seed return likely to be high, Agrii trials manager Steve Corbett says aiming for a minimum of two or even three flushes of weeds sprayed off with a good-quality glyphosate before cereal sowing would be ideal.

“With this season’s oilseed rape coming off well before the end of July, most growers will have at least six, if not eight, weeks before their autumn cereal drilling,” he points out.

“Indeed, they may even have up to three weeks between wheat harvesting and winter rape drilling in many cases.”

Recent rainfall for many parts of the country has also made soil moisture conditions favourable, almost guaranteeing a good chit with the correct stubble management.

Agrii’s work at its Stow Longa blackgrass trial site in Cambridgeshire shows the level of grassweed control achieved pre-drilling is one of the most important factors to enable growers to go into the autumn with a clean crop, perhaps even more important with such high seed return this summer.

“Two flushes of stubble weeds are infinitely better than one in reducing the grassweed seed burden ahead of planting, and three are even better,” explains Mr Corbett.

“This is because each flush of weed seedlings suppresses subsequent germinators, so when the seed bank is high, plenty of seedlings are left to emerge in the crop,” he adds.

With good stubble management, Mr Corbett says a good flush of blackgrass can be achieved within two or three weeks.

“Effective spraying off as soon as it comes through the ground will allow another flush a further two or three weeks later, even without any extra cultivation.”

Getting a quick and effective kill from the broad-spectrum herbicide applied after each flush of weeds is crucial and the Stow Longa trials have revealed the advantage of opting for the latest modern Roundup (glyphosate) products.

Mr Corbett says reliability is a big factor and Roundup has performed quicker, has better rainfastness and has the ability to cope with drier conditions and hard water.

“Unlike many other glyphosates, it is approved for post-planting pre-emergence as well as multiple pre-drilling uses.

“This means that, with care, you can get an additional round of control in to tackle any weeds emerging in the seed-bed ahead of the crop if you want to,” explains Mr Corbett.

On ground suffering particular grassweed problems, Mr Corbett strongly advises growers to delay wheat sowing until mid-October wherever possible to give even greater time for weed emergence and effective treatment ahead of drilling.

He also points out that Agrii’s Stow Longa studies have shown major advantages from rotational ploughing, providing it is of sufficient quality to effectively bury the bulk of the blackgrass seed at depth and is not followed by ploughing the following year to bring it back into the germination zone.

“Effective glyphosate treatment and delayed drilling is equally essential here. This is especially important wherever blackgrass seed is well spread throughout the soil profile.”