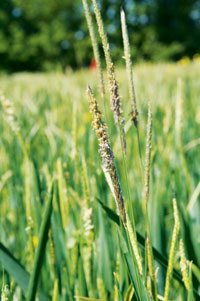 Results from testing whether blackgrass is resistant to pre-emergence residual herbicides should be treated with caution, a leading agronomist is suggesting.

Richard Peake from Harlow Agricultural Merchants believes the techniques used can overestimate the level of resistance to some active ingredients, leading growers to consider not using potentially useful herbicides.

Resistance testing, by its nature, uses artificial conditions. Typically it is done in greenhouses, in warm conditions suitable for blackgrass to grow strongly and quickly, he says.

That technique produces good results for post-emergence herbicides, which rely on active growth for best results, but it means the test doesn’t mirror what happens in the field with residual herbicides.

“In field conditions blackgrass is much slower growing and their growth is affected by ‘death by a thousand cuts’ as the herbicide acts on the weakened weed throughout the winter. These tests show the initial kill, but not the continuing effects from the herbicides.”

To test his theory that residual herbicides work over a long period of time in the field, he fixed several small quadrants in plots in the autumn and monitored blackgrass kill over the winter months.

Quadrants in plots treated with Crystal (pendimethalin + flufenacet) showed 50% kill in November, which had increased to 90% by March. “The weeds come up but over winter the chemical continues to grind away at the roots and the hard frosts finish them off.”

Mr Peake was first alerted to the issue by a discrepancy between resistance test results and field control from pre-emergence herbicides, particularly ones containing pendimethalin. “In our trials Crystal was clearly showing a 10% advantage over Liberator, despite the blackgrass having been tested as being very resistant to pendimethalin.

“I think you have to be very sceptical about the meaning of resistance results to pre-emergence herbicides tested in this way.”

No test is perfect, agrees Gordon Anderson-Taylor of Bayer CropScience. “But if you have one test that is resistant and one that is susceptible, there is a difference between the two batches.”

Interpretation of the results is complicated and often over-simplified, however, he acknowledges. “Any sample is just a proportion of the field, usually survivors of herbicide treatment, but what proportion of the population was that sample representing?”

It means that actual field performance is the best indicator of a herbicide’s effectiveness. But don’t ignore the significance of a change in a resistance status, he stresses. “The test is a good way of monitoring shifts [in herbicide effectiveness].”

ADAS resistance tests are carried out by attempting to grow blackgrass seeds in petri dishes inoculated with the herbicide, rather than in pots in greenhouses, the organisation’s Lynn Tatnell says.

“So it is in ideal conditions, but they are an indicator of potential problems.”

But a 3R result to a herbicide doesn’t mean it won’t work in the field, she stresses. “You can get good control if you’re using a good programme and the conditions are conducive. But knowing you have a high level of resistance means you should think about integrating other control strategies.”

Seed for resistance tests should not be collected until it is ripe, typically in mid-July, Mrs Tatnell says. “Ideally when it is sampled it should come off easily in your hand.”

Samples should be taken from lots of patches across a field to get a representative sample. “Patches tend to be representative within 20sq m, but after that it starts to get more variable.”