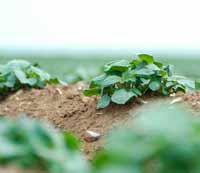 Applying foliar magnesium and phosphate to potatoes can help growers achieve better yields, according to research.

The trials, conducted in the UK and Holland by Headland, also found crops given the nutrients had a greater proportion of quality, marketable tubers.

Charlie Bannister, technical manager for foliar nutrition at Headland Agrochemicals, said: “We expected some yield benefits over untreated, but the difference was much greater than we had thought.”

For the trials, foliar phosphate Hi Phos was applied to a commercial crop of Pentland Dell at tuber initiation and onset of bulking.

The crop was sprayed three times with the blight sprays, giving a yield increase of as much as 3.5t/ha compared to untreated crops.

An adequate supply of phosphorous was crucial not only in the energy supply for the plants, but also to promote early shoot and root development in tuber initiation and tuber set, Mr Bannister concluded.

Crops given five applications of foliar magnesium Magnor from the second week of emergence, gave a yield increase of as much as 6t/ha – with an 18% increase in the number of 40-60mm tubers harvested.

“As potatoes are also susceptible to magnesium deficiency, which can lead to an imbalance in the relative growth of the root at the expense of the shoot, foliar applications show similar benefits,” noted Mr Bannister.

With drying conditions, he said the tests showed that foliar applications to potatoes were a reliable way to ensure crops absorb and use vital nutrients when necessary.

Previous foliar application trials in Holland on potato varieties Maritiema and Asterix have shown total yield benefits of 2t/ha and 9t/ha respectively, with a greater proportion of tubers falling in the 40-60mm grade.