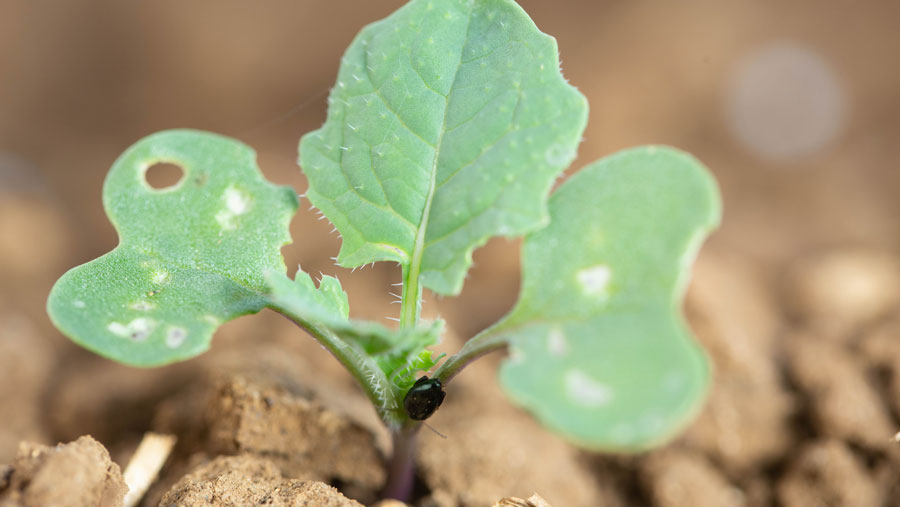 Research teams in the UK have received significant funding to develop new varieties of oilseed rape which are resistant to cabbage stem flea beetle (CSFB).

Scientists from the John Innes Centre (JIC) and Rothamsted Research will work together with seven crop breeding companies as part of the project which aims to find solutions to one of the most significant crop pests, which can devastate OSR crops.

It is thanks to a £1.8m cash injection from a Biotechnology and Biological Sciences Research Council (BBSRC) partnership award.

CSFB has become a more significant problem for arable farmers since the 2013 EU ban on neonicotinoids, which were previously used as seed treatments to control the pest.

The escalation has led to questions over the future of the UK oilseed rape crop, with a decline in the UK cropping area of 35% between 2012 and 2019.

A survey of Farmers Weekly growers last autumn found that 22% who had previously grown OSR had decided not to grow it for harvest 2021.

The research-industry partnership, led by JIC, is implementing an integrated pest management approach.

Key to this is the use of pest resistant cultivars of the crop, of which none are currently available.

This project will enable researchers to identify genetic markers – landmarks in the crop genome – which will guide breeders in developing resistant varieties of OSR that are less palatable to the beetle.

Research teams will be working with OSR breeding companies and will use commercial varieties and material in their pipelines to screen for resistance or tolerant traits and identify genes responsible. Dr Rachel Wells, at JIC, will lead on this area of research.

Sam Cook, scientific lead of the project at Rothamsted Research, said she and her colleague, Frederic Beaudoin, would be seeking to learn more about the mechanisms that drive feeding preferences of adult beetles and the survival and development of their larvae.

Rothamsted researchers will be running field trials to screen for variation in adults and larval feeding genotypes and will look to see how this variation relates to differences in plant metabolites, such as glucosinolates, sugars and leaf cuticle wax composition.

“I believe that growing crops resistant to this pest will help to reduce insecticide use and secure UK production of oilseed rape which is important for farmland biodiversity,” Dr Cook added.

Further research into the lifecycle and feeding preferences of the beetle is being carried out by the entomology team and two postgraduate researchers at the JIC where the first in-house breeding population of the pest was established.