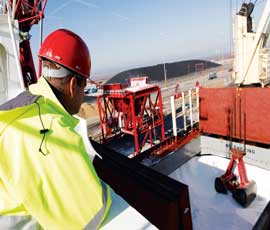 The price of nitrogen fertiliser has continued to increase, but a new urea-based fertiliser could be about to shake up the market. Philip Case reports

Growers have a new cost-effective alternative when choosing bagged nitrogen fertiliser after the launch of a new urea-based fertiliser, which promises agronomic performance on a par with ammonium nitrate.

Koch Advanced Nitrogen (KaN) has been developed using a formula which reduces nitrogen losses from the soil surface and retains it in the soil. So unlike standard urea-based fertilisers, it delivers low “volatilisation” – the loss of urea-N as ammonia gas, according to Simon Borthwick, managing director, of Koch Fertiliser.

KaN consists of urea and an Agrotain inhibitor, developed by Agrotain International. The inhibitor controls surface loss by blocking the release of urease, a naturally occurring enzyme that breaks down urea and releases it as ammonia in the air.

Volatilisation occurs when urea comes into contact with moisture and urease. Trials show that as much as 30% of nitrogen can be lost within days of applying standard urea fertiliser, says Brian Wade, regional manager of Agrotain International.

The effectiveness of Agrotain has been demonstrated in DEFRA-funded trials led by ADAS, plus other trials by Cambridge Arable Technologies’ conducted in Haverhill, Suffolk.

Brian Chambers, head of science in ADAS’ environment group, was involved in the DEFRA trial, looking at crop nitrogen recovery and ammonia emissions over three harvests from 2003 to 2005. He compared the volatilisation of different fertilisers – standard urea, ammonium nitrate and KaN – across 16 locations across the UK.

Ammonia loss through volatilisation in cereals crops averaged 24% with urea, 6% with KaN and 3% with ammonium nitrate.

Prof Chambers says: “From an environmental viewpoint, it’s not great for farmers to apply urea fertiliser and know that on average 20% is going to disappear into the atmosphere.

“When we applied Agrotain along with urea, however, we got a 70% reduction in ammonia emissions compared with urea fertiliser.

“The main advantage of Agrotain is it improves the reliability of urea as a fertiliser. It reduces the range of likely volatilisation.”

Based on recommended RB209 rates, average yields were matched at 9.3t/ha for both Agrotain-treated urea and ammonium nitrate, with urea slightly lower at 9.1t/ha.

“Yields with KaN were on a par with ammonium nitrate,” Prof Chambers says.

“Compared with urea you should get a yield gain because nitrogen is being retained in the ground and in the crop and not being lost to the atmosphere.”

Mr Borthwick says it will be marketed around 5-10% cheaper than standard ammonium nitrate fertiliser, he says. This saving is because the product is manufactured using urea, sourced mainly from Egypt where production prices are lower. The firm opened its UK fertiliser production facility in Avonmouth, Bristol, in October and KaN is now available to growers.

How the inhibitor works

The Agrotain inhibitor which KaN contains is a synthetically produced chemical which “chews” urea and stops it escaping as ammonia gas, Dr Wade explains.

The inhibitor, called N-(n-butyl) thiophosphoric triamide (NBPT), slows down the rate of volatilisation by stabilising pH levels in the soil, he explains.

Standard urea fertilisers can increase pH levels in soil from 7.5 to 9 and above – and it is this change in the soil chemistry which is driving the volatilisation risk, he notes.

“The hydrolysis reaction and conversion of urea to ammonia increases the pH, but when you inhibit the urea (with KaN), you maintain pH, but you are not acidifying,” Dr Wade says.

When KaN is added to the soil, the time lapse of urea transformation to ammonia gas is “slow and gradual”, he adds. Levels of pH increase only gradually to a maximum of 7.9, then drop to 7.5 around five days after application, research shows.

“Koch Advanced Nitrogen slows down this rapid change in urea and keeps everything in its starting original state,” Dr Wade says.

“When soil pH is allowed to increase to 9.5, 60% is in ammonia gas form and that can leak out to the soil and blow away with the air.

“So if you keep the soil stable, the vast majority of that stays in that stable NH4 (ammonium) form and sticks to the soil, so only a very small amount is converted to gas.”