Andrew Williamson drills all his cereal and pulse crops using variable seed rates on his Shropshire farm to get good even plant establishment and deal with problem grassweeds.

Mr Williamson altered his seed rates according to soil type in 2012, and now has the system working well across his 364ha of combinable crops at his Upper Overton Farm, near Bridgnorth.

“Having spent a lot of time in the tractor cab in the first year trying to make all the kit communicate properly, the last two or three seasons have been very straightforward,” he says.

Getting even establishment across the fields was his ultimate aim, because the farm has a range of soil types with a tendency to produce different seedbeds.

“There’s no doubt that the crop stand is now much better. The crops get off to a good start and you can see an immediate difference where the technique is being used. It has also helped to dry out the wettest patches,” he says. 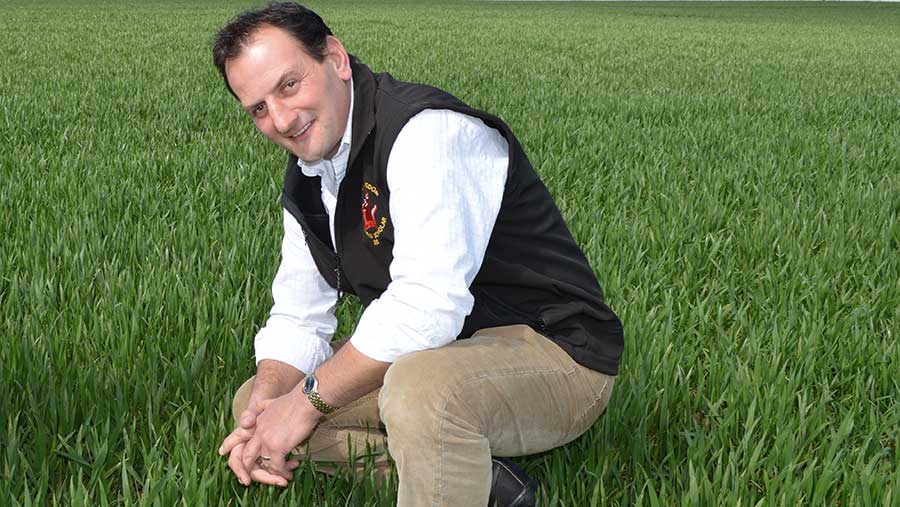 As a result, seed use has increased slightly across the farm because he is now establishing the optimum plant count in all parts of the field.

His first step was to carry out electrical conductivity scanning of the soil’s physical properties, so that the various soil types could be identified.

“That is an up-front investment, but it only has to be done once. It costs around £15/ha. Otherwise, we already had a drill capable of variable rates and a John Deere box in the cab,” he says.

He was then able to produce seed rate plans, which allowed changes to be made as the drill travelled and the soil type altered – increasing seed rates in heavier soils where soil-to-seed contact was likely to be reduced.

“In the same way, it also reduces seed rates in the kinder areas, so the range we are using is really quite wide,” he says.

This year’s spring barley crop has been drilled at seed rates ranging from 160kg/ha to 300kg/ha, for example, whereas previously he would have used 200kg/ha.

“You have got to be prepared to alter the rate by as much as 20-40% if you want to see a difference, especially as drill performance can be variable too,” he adds.

He double checks that the technology is living up to its promise by going out into the fields and doing plant counts.

“Although we have got changes in soil type within fields, they don’t tend to occur in distinct zones on this farm. So my system is based on making use of the raw data, rather than using a service provider to produce the maps for us,” Mr Williamson adds.

He has also been able to add another layer to his drilling plans, as maps of sterile brome infestations produced by drone flights have been added to the system.

“On some of our lighter land, we were developing a sterile brome issue. By adding in that information, we have been increasing the seed rate on those areas, so that the crop is more competitive,” he says.

Visitors to this year’s Cereals Event will be able to explore how altering seed rates according to soil type and in-field variation can bring agronomic benefits and economic gains.

At the event there is a precision and efficiency knowledge trail to follow highlighting relevant exhibitors, whether it’s for advice on how to get started or the equipment required to make it happen.

“The twin challenges of blackgrass and slugs mean that there is a pressing need to establish competitive, even crops, right from the start,” he says.

Very variable soil types lend themselves well to precision drilling, as seed rates can be tweaked according to previous experience and site potential.

“It’s all based on soil science and mapping. By establishing zones of different soil types and expected establishment within fields, and then producing a drilling plan, changes can be made,” he says.

That means it is different to simply upping seed rates by 20hg/ha in adverse conditions or where there’s a known problem, and in his experience it tends to raise the farm’s average yield.

“That increase seems to come from improving the worst bits. Certainly, crops are more even, which means that there’s less need to rectify things as the season progresses,” he says.

The event is to be held on 14-15 June at the 64ha Boothby Graffoe site just south of Lincoln, with nearly 500 leading suppliers already booked to attend.

The Cereals event is organised by Comexposium Haymarket Exhibitions, and Farmers Weekly is the media partner.