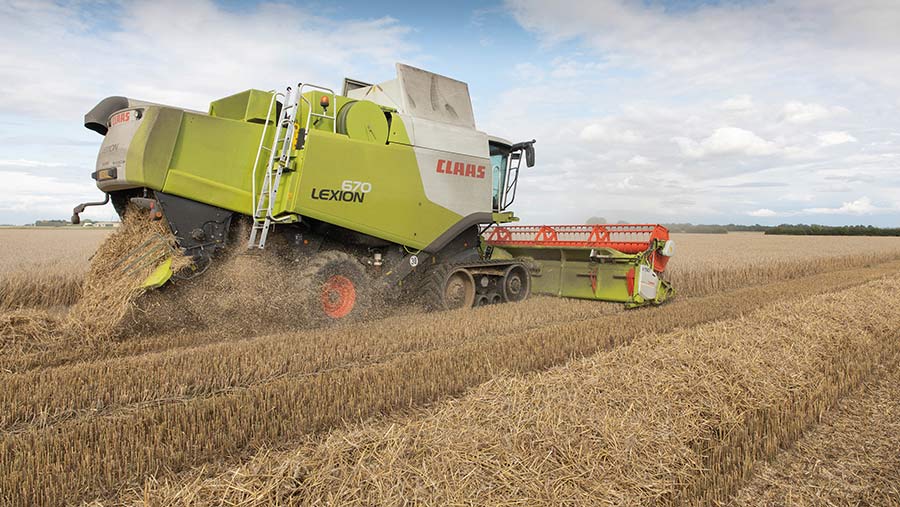 The landmark research, carried out by Rose Kristoffersen at Aarhus University in Denmark as part of her PhD, also shows blends can help reduce the development of fungicide resistance.

There are four parts to Dr Kristoffersen’s research investigating the potential benefits of blends. The first looked back over 19 years and data from 406 individual trials from the Danish equivalent of the UK Recommended List trials.

Each year, a four-way blend of varieties was grown as a reference, with septoria severity and yield compared with individual varieties, she says.

See also: Why farmers should tailor blackgrass strategies to dormancy

“Our analysis showed that the blends reduced septoria severity by about 10%, while yields increased by 1.4% across the trials. In untreated trials, these advantages increased to a 17% reduction in septoria and 2.4% yield increase.”

Blends also yielded more than the average of the four most popular varieties in a given year.

The second part of the research investigated whether those results could be improved upon by designing blends specifically to reduce septoria.

A key finding was that having more varieties in a blend produced a greater reduction in septoria compared with the average disease severity in the varieties grown individually.

“For four varieties the reduction was 24%. The highest disease reductions were found in mixes with both susceptible and resistant varieties.”

Blends made from just resistant varieties tended to show lower reductions in septoria, although the levels of disease in those plots was lower overall.

Overall, 84% of the 200 combinations trialled over three seasons reduced septoria severity, she says, with 72% of the mixes increasing yield in the 184 combinations taken to yield. “Yield increases were highest for the four variety blends at 3%.”

The third part of the research considered whether using blends could reduce the number of fungicide sprays required. Here the results were less conclusive.

About one-third of trials suggested it would be possible to reduce the number of sprays, one-third showed it wouldn’t make sense to do so, and in another third there was a small reduction in yield from cutting the number of treatments, which wasn’t statistically significant, Dr Kristoffersen explains.

“In the end, it will come down to your attitude to risk, but if I was a farmer, I would feel confident using a bit less. That is especially the case if you are growing four varieties of mixed susceptibility,” she says.

The final part of the research looked at the effect of blends on fungicide resistance development – specifically looking at three azole mutations. “There were reductions in the selection of each of the three mutations by using blends,” Dr Kristoffersen says.

“Interestingly, the mutation that was least widespread in the population showed the largest reduction.”

That could allow blends to be used to help slow down the development of SDHI resistance, she says.

The combined effects of the long-term benefit of avoiding losses due to reduced efficacy of fungicides, with the potential reductions in inputs and small yield increases, help make the economic argument for using blends strong, Dr Kristoffersen suggests.

“Their use helps makes the system more resilient. While growers might not see an economic advantage in every season, especially if they can’t reduce fungicide inputs, they will across seasons through greater consistency.”

A mix of wheat varieties with as much orange wheat blossom midge resistance as possible, similar maturity dates and good disease resistance were top of Yorkshire grower Angus Gowthorpe’s list when he started putting together his second wheat blend.

He was inspired to try his first blend of Skyfall, JB Diego and Relay on the 157ha mixed cropping and livestock farm, seven miles south of York, five years ago after hearing a presentation from the James Hutton Institute’s Adrian Newton at a Base-UK conference. 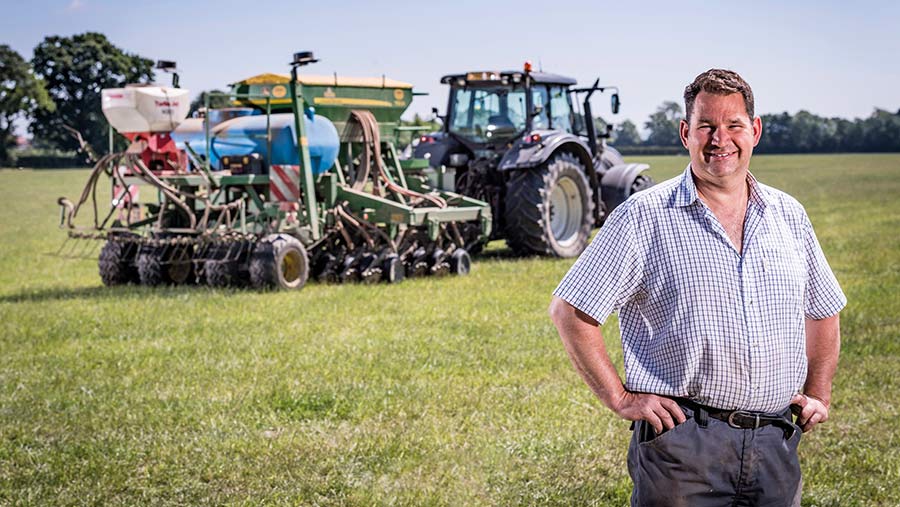 That first blend did three seasons on the farm, but reports of Diego starting to break down on other farms persuaded Mr Gowthorpe the time was right to look for a new blend for drilling in autumn 2018.

With a bit more experience, he knew the new blend needed to have a balance between disease resistance, harvest maturity dates, decent bushel weights and yield, which led him to choose Gravity, Shabras, Crispin and Kerrin.

“I wanted as much orange wheat blossom midge resistance as possible, as I don’t want to use insecticides. Only Shabras doesn’t have this.”

Harvest maturity
Another key attribute was relatively early harvest maturity. In his no-till system, wheat crops hang on for about a week more than others in the area, he says, something he puts down to better moisture retention.

However, he likes a reasonably early-maturing wheat to allow earlier establishment of a cover crop before his next cash crop.

“When growing blends, the different harvest maturity dates do tend to balance up well in the field – within reason,” he says. “But obviously you don’t want a +3 with a -2 in the mix, as it won’t be ready to harvest when the others are.”

Using varieties with similar harvest maturity dates does restrict choice a little when looking at disease resistance. “I wanted fairly clean wheats to keep the fungicide spend down so we are looking for the better scores.

“We’re also wanting to have varieties from different breeding lines, with different parents and grandparents, but it is very difficult as everything is so inter-related.”

That’s likely to continue as breeders use specific varieties with tolerance or resistance to barley yellow dwarf virus as breeding stocks for future varieties, he suggests.

The use of blends has helped him continue his regenerative agriculture journey, reducing fungicide use to just one synthetic fungicide at T2 this season for yellow rust control.

“Up until this season, we have been fairly conventional in our approach with fungicides, but there’s no doubt the system has reduced fungal problems as soil health has improved and our organic matters have increased, allowing us to reduce rates.

“This year we have switched primarily to using biology and nutrition instead of synthetic fungicides. We’ve reduced nitrogen by 25%, which also helps reduce disease.”

While Mr Gowthorpe’s system is helping to drive these changes in agronomy, he says those with a more conventional system would also benefit from using varietal blends.

Marketing hasn’t been an issue, he says. “I primarily grow for feed, which isn’t a problem, but have also sold blends to local mills for biscuit use.”