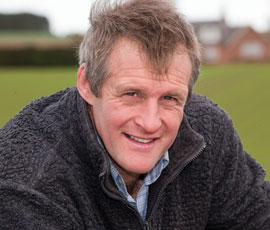 Doesn’t time fly when you are enjoying yourself? It’s October already and all is safely gathered in, all of next year’s crop is sown, thriving and we are contemplating a return to humdrum winter chores. STOP!

That was the opening sentence I wanted to write. Instead I have to tell you that sadly as I write none of the above is true. This year will be remembered for many fantastic things that happened, particularly in sport, but farmers in the Borders have had the worst harvest in living memory. No longer are people boasting about how good their crops are, rather it seems that there is some sort of perverse pleasure in revealing how bad they have been.

Last month I told you how dismal the barley was, now I can report that the wheat was no better, struggling to achieve 7.5t/ha. Beans remain in the field having had glyphosate and diquat applied to try to get them to die more quickly. But of more concern are the vegetables. Normally I would expect to be winding up our harvesting operation about the middle of October. However, this year I have only harvested 25% of our crop so far thanks to the extremely slow development of the plants. Yields are dire and I can only hope that some fields don’t give up the ghost altogether! Fields are saturated and it might be a long time before all the wheat planned in the area is sown.

Right, that’s enough moaning. A huge shed was built to store all my neighbours’ straw. However, during loading every time another bale was added to the front of the stack a whole column tumbled out of the back at the same time. This has caused much hilarity among the rest of his staff, as the poor lad putting the bales in was completely oblivious to the muddle accumulating at the back of the shed! I think there may be sides on by next year.