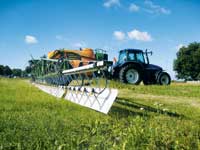 Farm Sprayer Operator of the Year Rob Cannell and his Irish counterpart Philip Reck were given a demonstration of the Slapduk, also known as the Crop Surfer, which claimed to offer a simple solution to a number of spraying challenges.

Drift reduction was the main attraction, with the manufacturer claiming a 90% improvement over conventional techniques when using a fine flat-fan nozzle. The firm also reckoned operators could spray at wind speeds of up to 10m/s (22.5mph) without fear of causing drift.

Hakan Pettersson, managing director for Viby Teknik which designed and built the system, said the wing-like shape creates a low-pressure area that pushes chemicals down into the crop, thus reducing drift and improving coverage.

That was a considerable improvement over the leading UK LERAP nozzle, which only offered 75% drift reduction, said Syngenta application specialist, Tom Robinson. “We need to establish exactly what standard this is being compared with, but it is impressive.”

He hoped to obtain a section of the Crop Surfer to carry out application trials in the UK next year. Mr Robinson said it would be particularly interesting to see how the system performed when used with one of the firm’s low-drift Amistar nozzles.

During a demonstration in an onion crop on a particularly windy morning, the group saw that the set-up produced hardly any drift.

A lightweight and flexible stainless-steel frame forms the body of the Crop Surfer and this is attached to the underside of the boom. Nozzles are mounted on the frame legs, facing backwards at 45° and are protected by a line of plastic shields.

A clever construction means each nozzle is able to flex up and down depending on crop height. “This means the nozzle angle and the nozzle-to-target distance remain constant, which ensures even application,” said Mr Pettersson 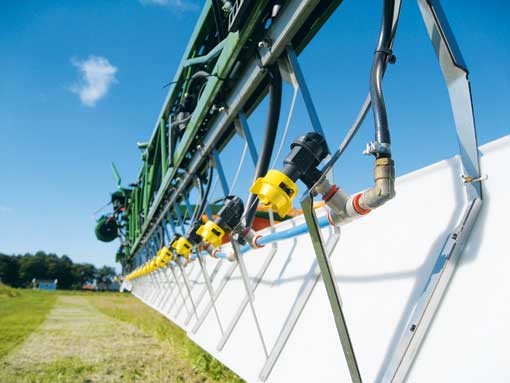 During operation, the plastic panels brush the top of the crop canopy, meaning the distance between crop and nozzle is much shorter than with a conventional boom-mounted nozzle, he said. “The distance between the nozzle and the target is another way of reducing drift – the shorter it is, the lower the drift.”

Product coverage is improved thanks to two unique features. Because the plastic panels flick the crop as they pass through, chemicals are applied evenly to both sides of plants and penetrate deeper into the canopy, said Mr Pettersson.

“As it passes through, plants are pushed forward, allowing the backs to be sprayed and, as they spring back up, the fronts are sprayed.”

It also changes the airflow over the boom, which improves product placement. “The wing-like shape creates a circulating pillow of air that the nozzles spray into. This swirls the chemical, which improves coverage.”

When spraying short crops, such as sugar beet, or applying pre-emergence products, the Crop Surfer does not make contact with the crop or the ground.

“It is placed a few centimetres above the crop or ground and, although the crop is not moved, drift is still reduced due to the short distance between the nozzle and target.”

The system does not restrict operating speed and, because it touches the crop, it makes the boom more stable, he explained.

Swedish vegetable sprayer Peter Nilsson uses a Crop Surfer mounted on a trailed 24m Moteska unit. “I’ve been using it since 2003 – the biggest benefit is the wind control and the improved coverage.”

Although the system was suited to spraying below 100 litres/ha water volume, he prefers to operate with higher levels. “I ­usually spray at 400-500 litres/ha with 5 bar pressure, and drive at 7-7.5kph.”

Additional stress on the boom was the single downside, but this tended to only be a problem with careless operators, he said. “We have to change some of the stainless steel sections after about 10,000ha, but they only really break if you hit a tree.”

Although he has automatic boom height on his machine he prefers to adjust it manually and, because he operates without headlands, he has to fold the boom at each end of the field to turn.

This year’s Farm Sprayer Operator of the Year winner Rob Cannell was impressed at the system’s simple construction and ease of use, but thought more testing was required. “I like the fact it is so simple to operate, but I’ll wait until it has been proven in the UK before I consider buying one.”

The Crop Surfer works on a similar principal to the Crop Tilter, which was used in the UK in the 1980s, said Syngenta application specialist, Tom Robinson. “The Crop Tilter was a rigid bar mounted below the boom that flicked the crop as it passed through.”

It was hoped that this would improve coverage, but it did not have any action against drift. The Crop Tilter’s main downfall was that the additional stress tended to destroy sprayer booms, said Mr Robinson.

Even though modern sprayer booms are stronger, there are only a handful capable of carrying a Crop Surfer, said Mr Pettersson. “Amazone and Moteska are the only makes we have fitted to so far.”

But, in principle, most booms with strong break-back resistance could be adapted, he noted.

The system has not yet been imported to the UK, but farmers are able to purchase directly from Sweden.

Because more chemical is applied to a large field, the size of no-spray zones next to watercourses increases.

“If the temperature doubles the distance more than doubles,” he said. “This is because products evaporate in hotter weather, which increases the pollution risk.”

But operators using a Crop Surfer were permitted to spray considerably closer to watercourses, he said.

A high proportion of the winter wheat grown in Sweden’s southern-most province, Skane, goes to produce 450,000 bottles of Absolut vodka every day.

The group visited farmer Henrik Nilsson who grows winter wheat for vodka production on the ground he farms at Gretelunds Farm near Ahus. Wheat varieties with a high starch content are preferred as they return a greater alcohol yield – Opus is his variety of choice.

He achieves yields of 10t/ha which goes to the Absolut vodka factory in Ahus, and returns a small premium over the feed wheat price.

It receives a two-spray fungicide programme and four herbicide applications, he said. “Grassweeds are becoming increasingly hard to control – we have no blackgrass in the east, but we suffer badly with wild oats and there are few effective products.”

Fungicides cost him just £35/ha, but he does need to irrigate all crops. “We need to water all our ground as the soil is so sandy, but we don’t have to pay for a licence.”