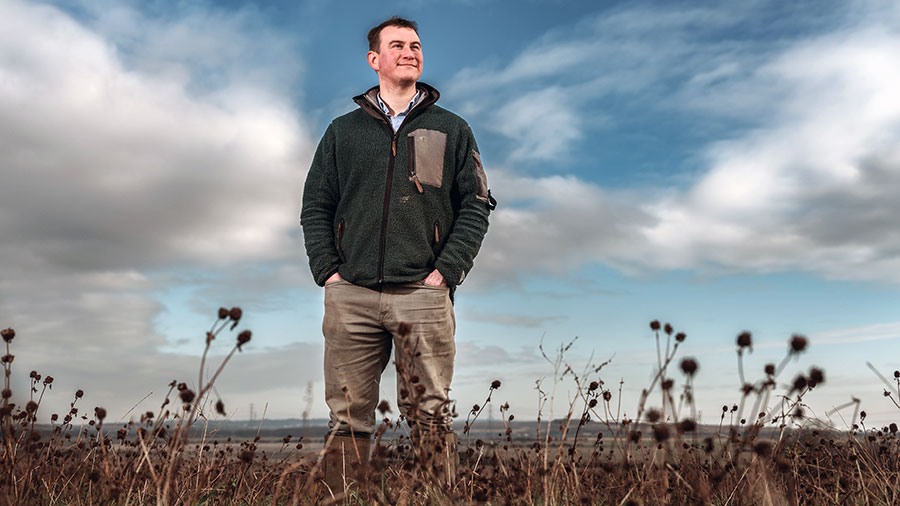 George Young is making big changes to his arable business with nature at its heart. Read the full report and watch the videos for more detail on his tree planting project and his Red Poll cattle.

Essex farmer George Young is creating an organic farming system based on agroecology that will eventually allow him to market a diverse range of products in their final form.

Intent on farming in balance with nature while minimising waste and producing nutritious food with known provenance, Mr Young’s aim is to have a business that exports just semi-finished food and fibre on a wholesale basis.

A key part of that plan is using all the waste streams on farm, in a circular approach, as he develops a self-contained system that supports local employment and addresses many of the issues heightened by intensive farming practices.

With a clear vision of how he sees it developing over time, Mr Young is using the money from his extensive Mid-Tier Countryside Stewardship scheme to fund the changes to his business.

Already he has introduced dual-purpose Red Poll cattle to graze the herbal leys which are part of a seven-year rotation, installed a mill to produce flour from a diverse range of crops, and planted more than 6,500 trees in an agroforestry project.

His future plans include bringing in poultry, to follow the cattle and to make use of the output of cleaning his own grain for milling, as well as developing a wild seam or “nature superhighways” through the middle of the home farm.

This will ensure that wildlife is provided for and has year-round access to permanent cover, as he puts nature at the heart of the business.

Further ahead, he hopes to establish an on-farm slaughter and butchery facility, so that his cattle don’t leave the farm to be killed.

In addition to producing meat, the plan is to begin outdoor milking the cows with the intention of making cheese.

While realising his ambitions will require a number of infrastructure projects – including ring fencing the farm in Fobbing, Mr Young has made immediate progress with his plans by focussing on the soil.

“That has involved putting in herbal leys for four years, to rebuild our soil structure and get the soils functioning well,” he says.

The leys, which contain a mix of species of varying rooting depths, are mob grazed. This provides extra fertility for the three years of combinable crops that follow the leys, which are established with very shallow tillage.

“We do have to use some cultivations to get the crops in,” explains Mr Young. “Providing we only work with the aerobic top soil, any damage is minimal.”

Having seen life return to the middle of arable fields, he is determined to keep it there. As a result, the farm is being designed so that areas of refuge – permanent strips, likely with trees – are always close by, and maximum field widths are kept to 40m where possible.

“I don’t want to inter-row hoe the crops, as I think it’s too destructive,” he explains. “I’m working on the basis that just 27% of the farm will be disturbed in any one year, but only as crops are established.

“Wildlife will always have permanent cover to be able to move around the farm and repopulate those disturbed areas.”

Last year he grew 20 or so varieties of Heritage wheat to turn into flour. He also grew buckwheat, lentils and peas – the latter two proving difficult due to the weather – while flax was grown for fibre.

“The lentils all failed,” he admits. “They are a finicky crop. Our peas were hit by a hailstorm, but are usually a part of our rotation and have performed well previously.”

This year, he has fewer Heritage varieties in the ground and a smaller area of buckwheat, as market demand is low. He continues to work with selected bakers to market the specialist flours he produces and looks for end markets, preferably local to the farm.

With much of the land he farms is in organic conversion, input use on the remainder has fallen dramatically and expenditure has come down from £160,000 to £30,000.

Of that, some goes on glyphosate pre-establishment while pre-emergence herbicides are used on wheat and pulses, with nutrition also used on selected crops. In time, that will cease altogether.

The agroforestry project was established last year, with woodland belts of a diverse range of fruit and nut tree species being planted 40m apart, including one belt of exotic trees.

More will be planted this year and Mr Young will be trialling various crop options between the strips, to see what can be achieved.

The wild seam, which will run through the middle of Fobbing Farm, could take up as much as 40ha of the 270ha block of land and will be allowed to regenerate naturally.

On its western edge, a diverse mix of heritage fruit trees and native bushes will be planted (to add more plant diversity), but otherwise it will be left to develop along re-wilding principles.

Fencing the wild seam means that he will have the option of using it like a rotational paddock, while its main purpose will be to support and enhance biodiversity – ensuring that beneficial insects and natural predator populations thrive.

“This is about looking at the bigger picture,” he says. “We know what the farming industry is going to be asked to do for the environment, so it makes sense to start doing things now.”

Everything that he has put in place at Fobbing Farms is done in accordance with a strict business plan, which assigns a risk profile to every aspect of each project.

His aim is that each enterprise will support at least one full-time employee as it produces goods to be sold on a wholesale basis.

Mr Young admits that he spends time thinking about what would work and looking for the evidence that tells him what to introduce next.

He also prioritises visiting other farms and learning from the wider agroecology support network, as he builds his farm business for the future.

“We are recycling nutrients and biomass, reducing waste, building resilience into the system and re-establishing the connection between producers and consumers,” he says.

“I’ve made a start with the most important factors and the ones which I know how to do.”

Pushing the Boundaries is a Farmers Weekly series featuring those that are thinking differently and changing their farming practices.

With agriculture facing an uncertain future, we talk to growers who are taking bold action to achieve their goals.

Catch up on two previous farmers: