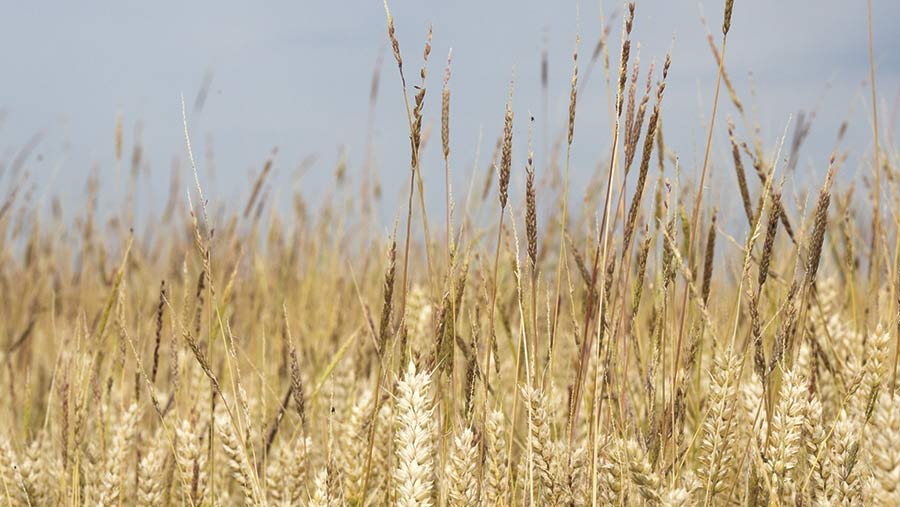 Herbicide resistance is the inherited ability of a weed population to survive a rate of herbicide that would normally kill it.

In the UK, herbicide resistance is already widespread in grasses, with resistant blackgrass in particular being increasingly difficult to control.

Ryegrass and wild oats are also affected, and there is a suspicion that meadow brome may also becoming resistant.

There are different mechanisms of herbicide resistance:

Cross-resistance occurs when a plant has one mechanism that enables it to survive treatment with herbicides from different chemical classes or with differing modes or sites of action.

Multiple resistance refers to plants that have more than one mechanism that enables them to survive treatment with herbicides with differing modes or sites of action.

Resistance in Italian ryegrass was first found in 1990 and is also widespread, but remains less of a problem than blackgrass. Enhanced metabolism resistance is common, while both types of target-site resistance occur, but are less common

It also affects wild oats, although resistance tends to be more localised than with blackgrass and ryegrass. The frequency of different ACCase mutations differs between the species, with fop-specific ACCase mutations more common in wild oats.

As a result, some non-fop herbicides remain fully effective.

Broad-leaved weeds have been found to have target-site resistance to ALS inhibitors since 2000. While it is restricted to just three species, experience from across the world has shown resistance could evolve in many other broad-leaved weed species.

Early detection of herbicide resistance is important. Symptoms include:

Where resistance is suspected, a test should be carried out. Most resistance tests rely on pot or petri dish assays using seed samples collected from weeds surviving herbicide treatment in the field.

Collecting a quality seed sample depends on it taking place when most of the seeds are mature and 10-20% have already shed. This timing varies between species.

For all species, allow seeds to air dry for a few days and then transfer to paper envelopes for storage and transport.

Preventing resistance occurring is an easier and cheaper option than managing a confirmed resistance situation. Experience has shown that simply changing herbicides is not enough to overcome resistance – instead a sustainable, integrated system has to be developed that is appropriate to the particular situation.

This will help to reduce the selection pressure on any weed species, reducing the chance of survival of resistant weeds.

Crop management, cultural control and chemical tools should all be employed. Crop rotation helps to avoid successive crops that require the same herbicides in the same field, cultural methods help to reduce the soil seed bank and herbicides can be used more effectively by including products from different chemical groups and using them in sequences and mixes.

Other options that can be employed are:

By integrating several non-chemical methods, in conjunction with herbicides, overall control should be improved. There is no magic bullet for the best non-chemical control strategy; solutions need to be tailored to the weed and resistance problem in each field.

Effective weed control depends on understanding specific opportunities in each crop across the whole rotation.

There is no evidence of enhanced metabolism resistance in broad-leaved weeds. This means using alternative non-ALS herbicides can be a solution.

However, experts warn that particular care is needed where there is already a confirmed problem and that growers should use mixes and sequences in a programmed approach.

Problem weed populations become harder to control as they get larger and fully established. As a result, these populations should be treated with some element of soil-acting residual herbicide in the autumn, followed by a post-emergence application with unaffected actives such as MCPA, bromoxynil and mecoprop.

Herbicides based on metsulfuron, tribenuron and florasulam are affected if resistance has been confirmed. These should only be used with unaffected active ingredients that are active against the target species, either as a tank mix or a sequence.