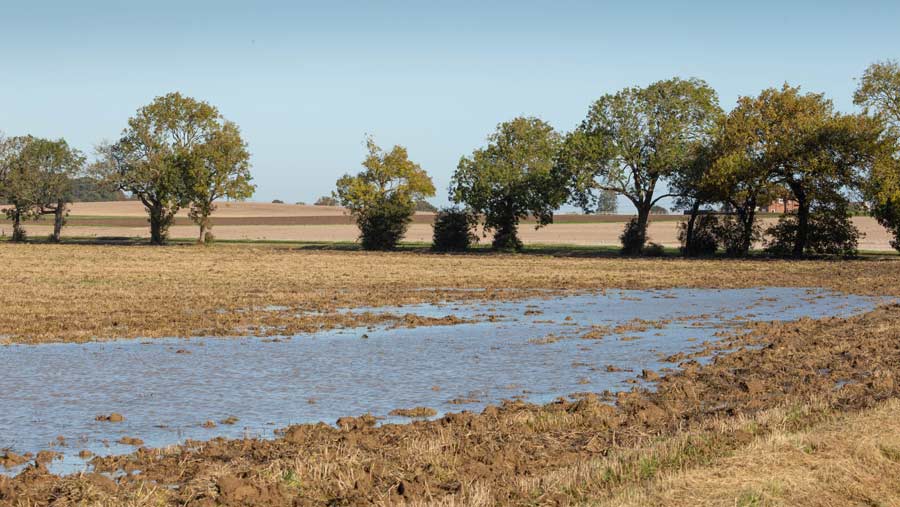 Two consecutive wet Octobers have provided challenges for arable farmers drilling autumn crops. If the trend continues, it may trigger material changes to farming systems, according to bosses at Velcourt.

“In the past 24 hours, in a benign part of Wiltshire, we’ve had 102mm of rain. That’s 80% of our normal October rainfall in two days,” he told reporters at a press briefing on Thursday (21 October).

“Our stated aim is that we won’t be drilling wheat before 1 October in this part of the world,” said Mr Shorter.

“Yet, if we’re going to get 100mm of rain in 48 hours, every October, that materially changes how we view and resource those businesses. Some of that is about capacity, mindset and cultivation and establishment systems.”

Velcourt revealed the company’s cost of production calculations for the 2021 harvest and business year during the briefing.

He said 85% of the group’s planned autumn crops were in the ground going into the winter for harvest 2021, compared with only 40% the previous year.

A relatively dry spring followed by a dull June and July meant challenges for harvest 2021 were the opposite to those of harvest 2020, he added.

The long, dry lead into the spring meant cost control around the crops was reduced. The average fungicide spend across the group was £65/ha, ranging from £30/ha to £120/ha. This was lower than average spend in a “normal” year of around £90/ha.

However, Mr Shorter said that a below par, but reasonable yielding year across the piste, has been well supported by “an astonishing market price environment”.

“Who knows where the wheat price is going to be in 2023? Now, you could sell some 2022 crop for £190/t, which is ultimately going to be a much higher pricing environment.

“Red diesel this morning is north of £80p/litre. This time last year, it was under £50p/litre.”

However, if the fertiliser price doesn’t fall, farmers will be faced with interesting cropping decisions next April/May when considering their requirements for harvest 2023, he added.

Patrick Levinge, head of agronomy at Velcourt, said despite the increase in fertiliser costs, margins were being maintained, driven by output and the high value of crops.

Nick Anderson, Velcourt’s head of crop technology, revealed some of the exciting R&D trials the group is working on.

Velcourt has been assessing grain nitrogen levels from all its wheat crops over the past three years to determine whether its nitrogen nutrition strategy is correct.

The data has been fed back into the trials work to develop ways to further optimise the use of nitrogen fertiliser to fine tune the strategy across the business.

This year, Velcourt has internally invested £100,000 in 40 small plot trials, with a focus on reassessing crop nutrition, physiology and fungicide and herbicide use. This includes trials looking at urease nitrogen inhibitors, the role of methylated ureas to improve nitrogen fertiliser use and new technologies around phosphate solubilisation from struvite.

The loss of the active ingredient carbetamide this year and the uncertain future for propyzamide means trials of mechanical hoeing. The use of this technology will become a key part of Velcourt’s weed control strategy for oilseed rape and pulses going forward.

Trials of blended wheat varieties in 2020 and this year are seeking to understand how they add value and which components work best in different growing scenarios.

“We found a very close correlation between the SwiftDetect test and disease that was later observed in those plots,” said Mr Anderson.

Velcourt – a private business with no third-party equity – manages farms and land in partnership with and for landowners across the UK. The business works with 120 individual farming businesses on 58,000ha. Velcourt also agronomically advises on a further 47,000ha.