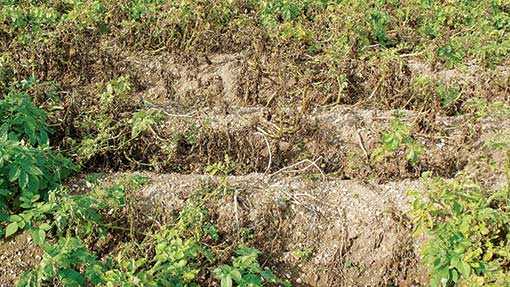 The increasing threat of alternaria means a new dual-action spray that tackles potato blight as well could see big benefits for spud growers.

Alternaria, also known as early blight, has grown in prominence over the past few years, becoming a big issue in susceptible varieties and in areas such as eastern England.

The wet winter has left many fields saturated, which can increase the blight risk, so the possibility of a high-pressure season means the two-in-one spray could prove vital for some growers.

The new product from Syngenta, Amphore Plus, will allow growers to control all strains of alternaria while also giving good control of the costly potato blight.

Syngenta field technical manager Stephen Williams says growers will need to identify the high-risk situations where they have seen it on the farm before as well as looking at varietal susceptibility.

“If you have warm temperatures and a bit of leaf wetness, for example when you are irrigating, then these are ideal conditions for infection. Also, if the crop is going through any type of stress then it will be more susceptible to the disease,” he says.

This year will be the first season Amphore Plus is used. It combines one of the most widely used blight actives – mandipropamid – with a new active ingredient for potatoes – difenoconazole.

Mr Williams anticipates growers in the East, where there is some of the highest alternaria pressure, will see some of the biggest benefits.

“If you are in a real high-risk period with high temperatures and you know alternaria is going to be a big threat, I would put them on in weekly successions and block the applications together,” he says.

When the temperature is in the low 20s, but growers know they may be at risk, Mr Williams advises to alternate applications with other products to protect from the disease over a bigger risk period.

Alternaria can also come later in the season so growers are warned to keep a close eye on their potato crops.

“Last year we had cases of widespread alternaria in some fields, so we encourage farmers to monitor crops carefully and treat ahead of disease getting into the crop, or on very first signs of infection, to get the most out of the preventative materials,” Mr Williams adds.

Colin Smith, agronomist at Prime Agriculture, says the simplicity of the product will make it a useful tool for many growers.

“You would normally have to tank mix, so the ease of having it all in one can may prove useful. It has the mandipropamid element, which gives good control against potato blight, and then you have got the difenoconazole, which is fully approved and is not an EAMU like many of the others are,” he adds.

Mr Smith suggests varietal susceptibility will be one of the biggest drivers for the use of the product and says he doesn’t see it as being widely used where farmers are growing less-susceptible varieties such as Desiree.

Looking ahead to this season, Mr Smith says the strength in previous spray programmes means he does not foresee a great deal of changes.

“There are a lot of very good products and I think the blight programmes will remain based on basically the same ingredients as they were previously, so we are looking at products such as Infinito, Revus and Ranman,” he adds.

“I don’t think I will be looking to make any drastic changes. These are products that are rain-fast and effective on blight. It will be more about fine-tuning the programme during the season and thinking about what products you add with the main one in the event of there being a high-risk period,” Mr Smith says.

Meanwhile, David Cooke from the James Hutton Institute says there is little change in blight populations, but warns growers not to be caught out following a relatively low-pressure year.

“We need to be aware that if we have a warm, wet spring then inoculum could still be in the soil. Therefore we need to get our protection on early and then prevent the fright we got in 2012,” he says.

“Last season was generally low risk and there is always a concern people can forget quickly and easily. There will be a lot of water about and this always increases the risk of soil-borne inoculum being more of a problem,” he adds.

Last year’s population of blight was broadly similar to the year before. A2-Blue 13 has made a bit of a comeback, which rules out metalaxyl products, but they have tailed off anyway, according to Dr Cooke.

The Green 33 strain that showed reduced sensitivity to the commonly used active fluazinam has pretty much disappeared, with no isolates found at all last year in the UK.

The aggressive blight strains A1-Pink 6 which, like A2-Blue 13, is able to infect earlier, sporulate more and spread more efficiently in the crop, remains one of the biggest risks with vigilance early on and planning crucial.