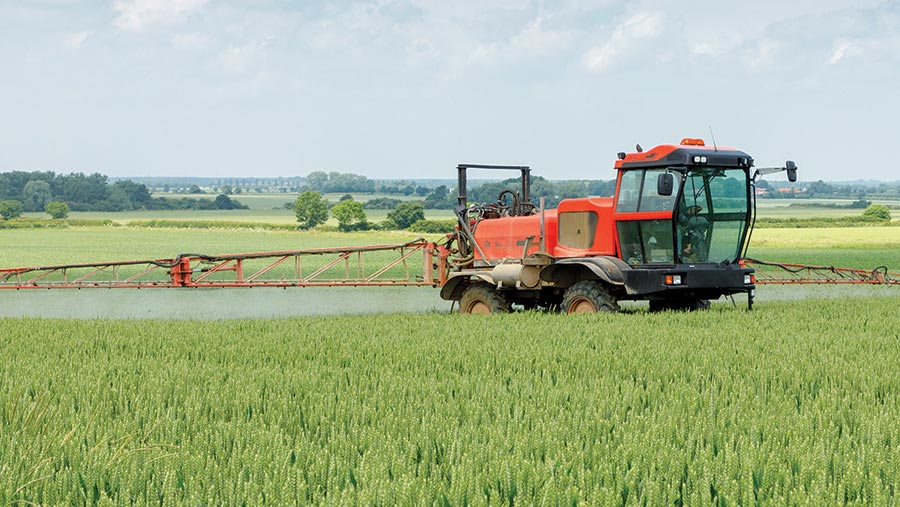 Berkshire milling wheat grower Nick Philp is cutting his nitrogen fertiliser use by using a foliar product while increasing his chances of hitting breadmaking quality.

Feeding little and often with foliar nitrogen helps his crops thrive on his droughty soils, and he now has a 100% success rate in hitting milling protein standards across nearly 600ha of quality wheats.

Reducing nitrogen means less potential leaching into watercourses, which is set to be of heightened importance in a future more environment-focused farm policy.

“In the context of nitrogen use and climate change, this helps tick all the boxes,” he tells Farmers Weekly.

Indeed, lower nitrogen use will help reduce ammonia emissions and fit in with the NFU’s aim of net zero farming by 2040, while also working smarter on the farm by using fewer inputs.

Before his partial switch to foliar Mr Philp found that he was using more and more nitrogen fertiliser, up to 250kg/ha and more, to produce 13% protein milling wheat, with costs and environmental concerns rising while he was hitting premiums only about 90% of the time.

“Over the last two years we have had no problems hitting milling specifications with protein levels well over milling standards,” he says.

He is growing the varieties Zyatt and Skyfall for milling group Heygates to a minimum protein of 13%, and also the German “E” or top quality elite wheat variety Nelson to 14% protein. The miller offers buy-back contracts for this variety.

For breadmaking use millers generally looks for wheats with 13% protein, 250 hagberg and a specific weight of 76kg/hl.

Mr Philp has maintained his base 200kg/ha three-way split of a soil-applied urea/ammonium nitrate (UAN) liquid, and then replaced a further 50kg/ha dose at the flag leaf stage by three applications of the foliar product PolyNPlus.

This product is formulated with ureic polymers and a 3kg/ha individual dose is applied to the leaf rather than to the soils. It is sprayed on to the wheat with the T1, T2 and T3 fungicides, giving a total nitrogen usage of 209kg/ha.

Mr Philp says he is now considering reducing his base 200kg/ha level of nitrogen down to 180kg/ha, or even 150kg/ha, and still hopes to hit valuable milling premiums.

There is little material cost benefit in switching to the foliar products, but there are benefits to the environment, reducing passes through the crop, giving healthier crops and a better rate of hitting the milling price premium.

The old flag leaf application of 50kg/ha of UAN was applied as a separate operation using dribble bars on the sprayer, and sometimes an additional ear application was taking nitrogen use above 250kg/ha.

Syed Shah, an agronomist with crop consultant Niab, agrees that there is a big advantage in reducing the number of passes through crops, and in being able to apply the foliar nitrogen with a conventional sprayer.

“The foliar product can be applied with fungicides at the T2 and T3 stages and is taken up rapidly by the plants,” he says.

Mr Philp’s regime is to apply his base 200kg/ha of nitrogen in a three-way split by the end of April – 50kg/ha in early March and 75kg/ha doses in early April and again in late April – and then three PolyNPlus doses applied at T1, T2 and T3 along with magnesium, sulphur and potassium.

He is farming 1,200ha from his base at Church Farm, Waltham St Lawrence, between Reading and Maidenhead, on soils ranging from light sandy loams to silty clays in the Thames Valley, with half of the farm down to quality milling wheats.

Yields of these milling winter wheats average 8.5t/ha on soils which can suffer from drought in a dry spring, and this is his fourth year using foliar nitrogen.

Mr Philp’s plans for the future include reducing his fungicide spend, as the foliar nitrogen is producing healthier crops, while he is looking at testing his grain to check he is getting his crop nutrition right.

“Healthier plants lead to less stress and these tend to be less attacked by disease,” he says.

Dr Shah agrees and adds that there are signs that the use of foliar nitrogen has helped control mildew.

The foliar nitrogen product is marketed by BFS Fertiliser Services and group managing director Rosalind Platt says it has proved particularly useful in improving the uptake of nitrogen in dry springs. The product contains ureic polymers, sulphur and trace elements.

She points out that as PolyNPlus is applied to the leaves rather than the soil – as with solid and most liquid fertilisers – there is better uptake of the nutrient and a reduced chance of scorch.