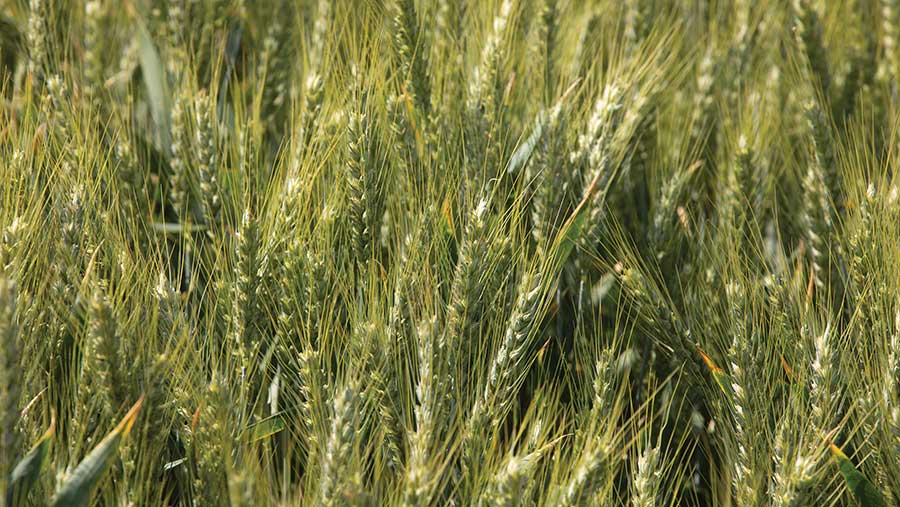 Simon Chaplin, Abington farm director, runs 1,659ha across the UK, ranging from Kelso, in Scotland, to Cambridgeshire, where he successfully grows continuous winter wheat with the help of the amino-acid-based biostimulant.

Since trialling AminoA FLO during the drought of 2018, across his low-cost system, where continuous winter wheat crops are drilled late to reduce the threat of blackgrass and take-all, he has seen significant improvements in both yields and performance of his winter wheat, while his fungicide costs have fallen dramatically.

In the dry summer of 2018, he conducted 36 half-acre trial plots of winter wheat, where two litres/ha of AminoA was applied at early flowering, increasing yields by 0.47t/ha.

A separate investigation of a reduced rate of one litre/ha was also applied during flowering, causing a 0.32t/ha increase.

This achieved an average yield of 9.5t/ha across his continuous Skyfall and Siskin milling wheat crops, which broke his farm record, despite crops going three months without rain.

“A 9.5t/ha yield would be respectable as a first wheat in any year, but to achieve it in continuous milling wheat in a drought growing season convinced us that the positive effects of AminoA had been significant,” he says.

Mr Chaplin points out how biostimulants play an important role in alleviating crop stress, as the products are particularly effective during times of sub-optimal growing conditions.

He explains how the biostimulant has slashed his fungicide inputs to just £12/ha, about £75/ha less than the UK average, as the amino acid complex helps the transfer and penetration of the fungicide into plants, increasing efficacy of chemical inputs.

“The AminoA Flo strengthens the whole plant, making it more resistant to disease,” he adds.

He routinely applies one litre/ha of AminoA, which costs him about £6/ha, in a mix with every fungicide and chloremequat application he makes.

“AminoA provides me with the confidence to plant crops later in the season as it helps their physiology, making them stronger and more vigorous, as well as significantly reducing fungicide costs,” he highlights.

The first biostimulant and fungicide application is usually made in March, slightly earlier than the T0 fungicide timing, which helps remove any inoculum threats that survived over the autumn, while this also promoting tillering and rooting before apical dominance is initiated.

Applications of the biostimulant has caused a significantly earlier onset of tillering, boosting plant populations so much that Mr Chaplin was prompted to reduce his seed rates, after populations reached 1,100 plants/sq m on just 180 kg/ha of nitrogen.

Consequently, last year’s harvest saw his highest yield ever, achieving an average of 9.7t/ha on a full wheat and triticale rotation with no breakcrops whatsoever, while his agronomist confirmed no visible diseases and lowest tissue test disease levels, despite his low fungicide costs.

Crops produce amino acids throughout their growth cycle, so applying amino acids at any point of their development can benefit the plant.

“The earlier in the cycle it is used for the first time can have profound influences in crop development and final yield,” he adds.

He advises one litre/ha of AminoA FLO to be applied routinely in all fungicide applications, even when the crop is growing well to maximise crop improvement, meaning growers do not have to make additional machinery passes in the crop, which would otherwise increase input costs.

However, in severe situations of crop stress, such as drought, a higher rate of two litres/ha is recommended.

He adds that the biostimulant is suitable for tank mixing with other agrochemicals, but warns that the product should not be mixed with acetolactate synthase inhibitor herbicides, as these disrupt the amino acid production of the target weed.

He therefore recommends applying the herbicides in this group seven days after a tank mix that includes AminoA FLO.

Mr Phillips recommends applying the biostimulant when crops are at the three-to-four leaf stage and onwards, as this helps cereal crops to maintain tiller numbers, improve nitrogen uptake by increased rooting, and influence embryonic ear development.

Independent trials, run by Niab and Eurofins, have investigated the effects of the natural biostimulant AminoA FLO on the grain yield of winter wheat, with trials showing yield increases of more than 1.2t/ha in drought conditions.

Applications of the highly concentrated amino acid complex were applied at 1.5 litre/ha in March 2019 at the T0 and T1 stages, in a low fungicide situation, where yields saw a 0.73t/ha increase.

Further research during the drought of 2018, in North Yorkshire, also showed winter wheat treated with the biostimulant at T1 and T2 to return a yield increase of more than 1.2t/ha.