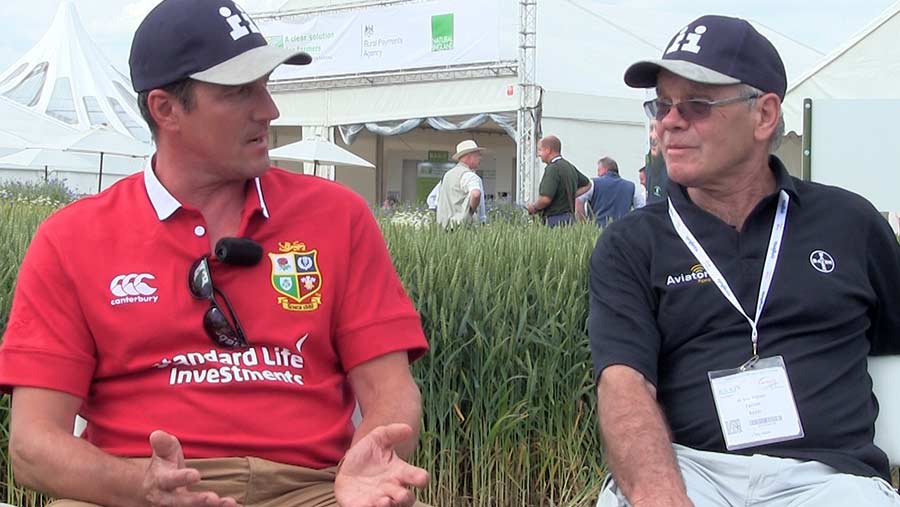 Both came together at Cereals 2017 to speak to Farmers Weekly in this exclusive video and it was quickly apparent that their approach to growing wheat was remarkably similar in terms of nitrogen fertiliser rates and fungicide applications.

Mr Watson recorded a yield of 16.79t/ha on his farm in South Island in February this year, beating Mr Smith’s 16.52t/ha in 2015 on his farm overlooking Holy Island near the Scottish Border.

See also: Cereals 2017 video – Farmers have their say on future of subsidies

Both growers saw their combine yield meters hit levels of over 20t/ha in patches of their fields, and believe 17.5t/ha could be well within their reach over a whole field.

Mr Watson farms near Ashburton close to the coast, south of Christchurch, on fertile silty soils of the Canterbury Plain, while Mr Smith farms heavy clay soils just south of Berwick-on-Tweed on the Northumberland coast.

The New Zealand crop was sown at a very low seed rate of about 65kg/ha to give 110 plants/sq m compared with Mr Smith’s high 185kg/ha rate, reflecting the milder winters on Mr Watson’s farm and more opportunity for his crops to tiller.

Mr Watson has grown 15t/ha winter wheat crops without irrigation, but the addition of 50mm of irrigation helped push his crop yield up to world record levels.

Both farms had similar annual rainfall levels of about 600mm (24in), but Mr Smith’s farm gained from longer day lengths in the summer as it is further from the equator.

Both crops had a good start with Mr Watson’s wheat following a crop of herbage grass seed and then beetroot seed and had 258kg/ha of nitrogen applied, while Mr Smith’s followed spring beans with 310kg/ha of nitrogen used.

Mr Watson used the yellow rust-susceptible variety Oakley and Mr Smith the variety Dickens and both crop yields were registered with the Guinness Book of Records.