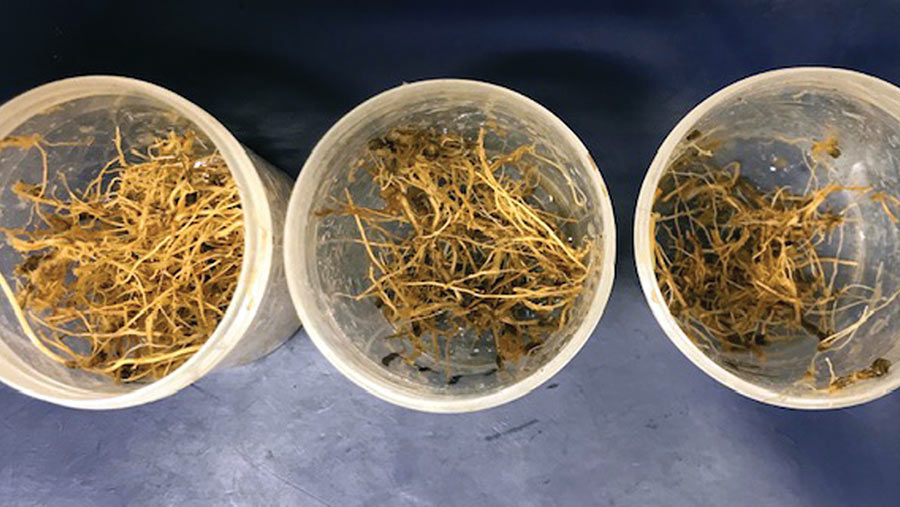 A new root-based protein prediction test aims to give milling wheat growers the information they need to apply exactly the right amount of nitrogen fertiliser to achieve breadmaking protein standards.

Hitting the protein standard is essential in earning the breadmaking premium. However, this leaves farmers with the challenge of deciding how much nitrogen fertiliser to apply, especially as a higher yield can effectively dilute the protein.

To help farmers avoid this dilution, an independent lab has been developing a test which has undergone three years of testing on field grain samples.

Overseeing the trial, Mechteld Blake-Kalff of Hill Court Farm Research tested about 30 commercial samples from farmers, and she says protein levels were successfully corrected for the majority of wheat samples.

“The beauty of the new test is that you can sample as late as mid-May to mid-June and then be able to adjust a final fertiliser application to make up any potential quality shortfall identified, or cut it out and save money if all is looking good,” she says.

Nitrogen uptake is closely regulated by the plant, and if growers apply too much then the plant won’t take it up. Therefore, she looked for the signals from this regulation mechanism to work out how much nitrogen was needed.

“Growers usually use the last application to go for protein – some people put on another 30-40kg/ha of nitrogen at that time – so you need to do the test before that to see if you need the extra nitrogen,” she says.

The test gives a protein value if no further nitrogen is added, so giving information for the grower and agronomist to work out how much extra nitrogen is needed at a flag leaf or ear application.

The group initially looked at taking leaf samples to examine the build-up of sugar in the leaf, because if there is not enough nitrogen to make protein then there is a back-up of sugars.

However, results can vary depending on how sunny the weather is, so the group switched to a focus on the roots and how much nitrogen is being taken up from the soil.

The roots are “told” by the rest of the plant if they have enough nitrogen, and the test gives a reading for what the protein end result would be without any further nitrogen added.

In the test, the roots have to be very clean with no contamination from the soil, so this can be time consuming and the lab is limited to testing 50 samples a day.

Samples were taken from a wheat crop grown by Wiltshire grower Martin Smart last year, and the test showed a very healthy crop, but predicted a protein shortfall.

“The crop samples were dark green and appeared to be full of nitrogen, so we were very surprised when we did the test and it predicted that the protein level would come up well short,” says Dr Blake-Kalff.

The crop yielded an impressive 15t/ha and with extra nitrogen applied made 12.5% protein, whereas a strip in the field not given the extra nitrogen produced only 11.8%

Dr Blake-Kalff says testing is best conducted two weeks after the last nitrogen application, so testing can start in mid-May – after an April main dose – and can be conducted until mid-June.

Growers should take five-to-10 whole wheat plants per field to be tested and results are available in two-to-three days.

Sampling his crops in May allows him to fine-tune his final nitrogen application to hit the 13% protein demanded by many millers on a high-yielding wheat crop, and gain a valuable price premium.

This season, this root-analysis test may prove particularly useful for Mr Birchall with a wide variability of wheat crops and plenty of late-drilled ones after a very wet autumn.

“This test could save us some money on the backward crops and also prevent the over-use of resources,” he says.

Last year, he trialled the test on a 64ha field of the milling variety Zyatt and adjusted his final flag-leaf nitrogen application to hit 13% protein for a crop which yielded 11.5t/ha, and earned him a £23/t premium over feed wheat.

On his sandy loam soils, he had applied total nitrogen of 240kg/ha, including the flag leaf application, and was spot for 13% protein after using the test, which is being developed by Hill Court Farm Research.

“We had such a big yield and hit the protein without using sky high levels of nitrogen. It’s all about profit, and not using too much nitrogen,” he adds.

He manages 600ha of largely arable land at Sundorne Castle Estate, just east of Shrewsbury, and in a fairly dry area of Shropshire he grows 200ha of milling wheat.

His base nitrogen regime amounts to some 200kg/ha, with 40kg/ha of liquid applied in early February, and then the main dose of 160kg/ha of solid ammonium nitrate split equally between mid-April and early May.

Wheat plant samples from the Zyatt field were taken in May, and it was calculated that the crop needed another 40kg/ha of solid ammonium nitrogen to hit successfully the 13% protein target.

For this spring, he is keen to use the test again on a range of his wheats, which include Skyfall and Illustrious as well as Zyatt, as a decision-making tool to target the exact amount of nitrogen his crops need.

“We will be certainly be targeting the Illustrious, which is grown on a Warburtons contract, and also our backward wheats to match nitrogen to their yield potentials,” he says.

Breadmaker Warburton looks for 12.5% protein wheat rather than the 13% demanded by most of the rest of the industry, but it does not allow foliar nitrogen to be applied to the wheat ears. So the flag leaf application is the last nitrogen that can be applied.

With a lot of estate in a nitrate vulnerable zone, near the Rivers Severn and Tern, Mr Birchall is keen to fine-tune nitrogen to achieve yield and protein without overdosing crops with nitrogen.

Ross Leadbeater, business manager for CF Fertilisers, which has supported the new test, says after the prediction, growers will be able to accurately work out the nitrogen needs of the crop.

“Growers will be able to sit down and work out the yield potential of the crop and then calculate how much extra nitrogen is needed,” he says.

Further details of the test can be obtained from Hill Court Farm Research, info@hillcourtfarm.co.uk or telephone 01452 840693