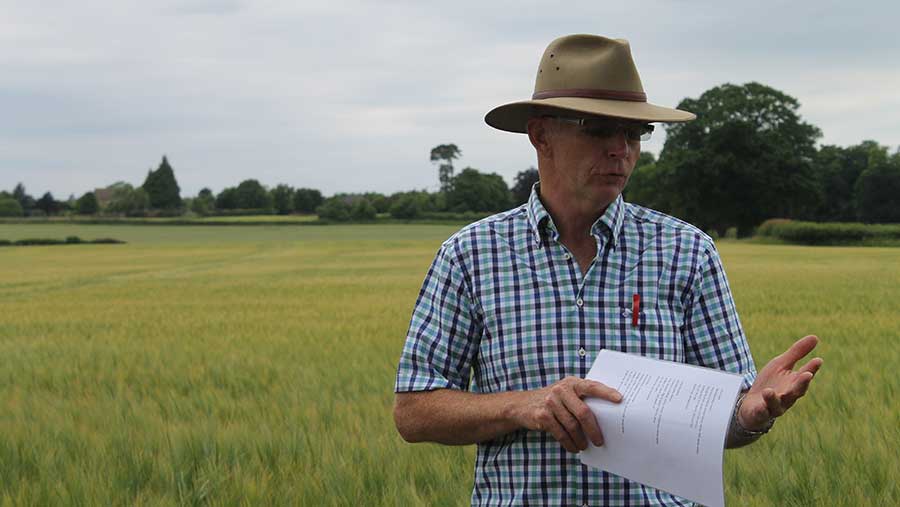 Finding ways to battle a growing ryegrass problem and slash machinery costs are among the results one Wiltshire farmer hopes to achieve during his three years as the AHDB’s regional monitor farmer.

Roger Wilson, who farms with his brother Peter at Lower Odd Farm near Malmesbury in Wiltshire has just begun his stint in a bid to improve the health of his arable business.

See also: How to crack down on costly soil compaction

His top challenge is managing the highly variable soils, which range from free-draining over limestone with a pH of 7.5-8 to impeded drainage clay loams, with a pH of 6.5-7.

“They can become unworkable within a 24-hour period – either becoming too dry or too wet,” he says. “They would become unfarmable if we did not to work with them.”

“Consequently, we cannot drill too late in the autumn or too early in the spring, as we cannot get on the land.”

Blackgrass has been an issue on the farm for more than 20 years, but Mr Wilson is not too concerned about it.

As he cannot get onto his heavier land to drill later in the autumn in order to combat blackgrass, he instead plants spring barley to try to tackle it.

“Everybody knows how to manage blackgrass problems – I have ryegrass issues now and it is far more of a problem than blackgrass,” he says.

“It has gone from next to nothing to covering 2.4-2.8ha within several years. I hope that within these three years as a monitor farmer, I can better understand what to do about it and how to go about tackling it.”

Spring beans and oilseed rape are grown as break crops on the farm, with winter wheat the main crop.

Mr Wilson also has a beef finishing unit with between 70 and 120 cattle, as some land is not suited to arable usage, and is sown to four to five-year grass leys.

He buys in weaned store cattle and feeds them entirely on cereals, grass and straw from the farm.

“At the end of the day, I end up with a valuable commodity from them – manure. And farmyard manure is the best way to increase the organic matter in my soils,” explains Mr Wilson. “It is another way to try and keep costs under control.”

Machinery is another large cost on the farm, but there may be scope to cut it back. “Like most farmers, I have too much machinery, but we do everything ourselves except high-clearance spraying and combining.

Historically the farm has been in Entry Level Stewardship but Mr Wilson has not applied for further management schemes. “We kept the grass margins from the scheme though, as it makes spraying easier.”

Benchmarking is another key aspect of the scheme, and is something Mr Wilson very much hopes to benefit from.

Working together, Mr Wilson and AHDB south-west benchmarking officer David Pett have used AHDB’s Farmbench tool to draw up his figures from 2016. These will lay a good foundation upon which to compare the 2017 figures and others going forward.

“Benchmarking is new to me, and we are still tweaking the figures, but I have had to be very frank about them,” explains Mr Wilson.

“The machinery figures horrified me. My dilemma now is that it is time to change the telehandler and all I am thinking is what that will do to my benchmarking figures.”

The second round of Monitor Farms have kicked off this autumn with a total of 25 Monitor Farms across England, Scotland and Wales.

Find out more about your local Monitor Farm including details of future open days by visiting the AHDB online.