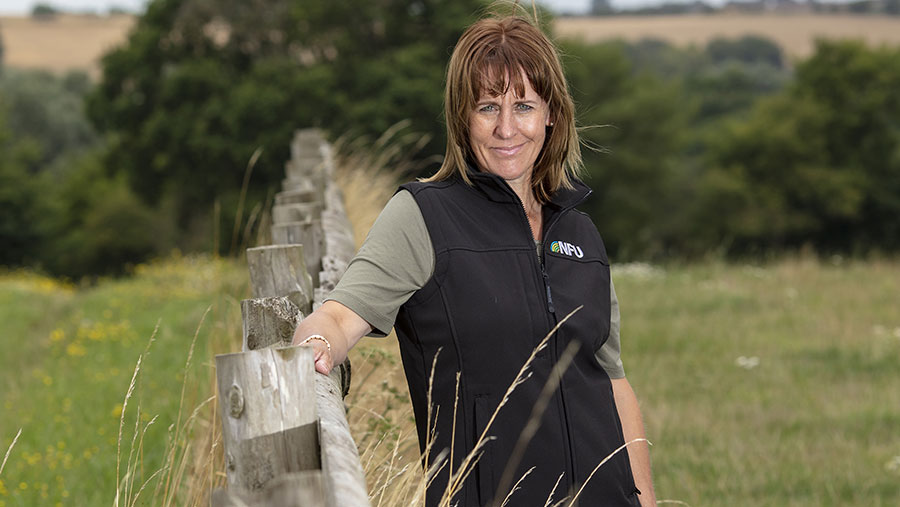 The head of the NFU has blasted the UK government’s vision for future farming policy in England, warning the seven-year agricultural transition “looks pretty bleak”.

Speaking at the NFU Council meeting in Stoneleigh, Warwickshire, on Tuesday 25 January, president Minette Batters said she felt as if she was leading an industry that was “stood on the cliff edge”.

Mrs Batters challenged council members to go back to their counties and regions to reinvigorate the discussions to create a new way forward based on science-led, evidence-based future farming policy.

“This is a pretty long and weary road, but we are going to have to really up the ante over the next two years,” she said.

“It will be the run-up to probably the most competitive election that  we will have seen, and there will be more at stake at that election than at any other time.”

The political landscape could change as early as by the end of this week, Mrs Batters said. “We could be having a new prime minister and, in many ways, bring it on, because the combination of the perfect storm in Number 10 at the moment has proved exceptionally challenging.”

Mrs Batters criticised Defra’s proposals for the budget split for the three schemes under Environmental Land Management (ELM), pointing to a cross-industry vision for the scheme in 2020, supported by the Game and Wildlife Conservation Trust, the Country Land and Business Association and others.

“The breakdown came to 65% of the budget in SFI [Sustainable Farming Incentive], 30% in LNR [Local Nature Recovery] and 5% in LR [Landscape Recovery],” she said.

Instead, Defra secretary George Eustice announced at this month’s Oxford Farming Conference that the budget will be split evenly among the three schemes.

Mrs Batters said the plans would benefit wealthy landowners at the expense of smaller farmers.

“These small amounts of very privileged landowners won’t actually need to be living here. They could be Russian oligarchs buying up land and that is 35% of the budget,” she added.

Mrs Batters said the country was “back to square one on new entrants” and there was “no vision for what our farmers currently want to do”.

She added: “We have no scheme for the moorlands – just to remind you, two-thirds of the UK is less-favoured areas.

“We have a situation with a farm equipment technology fund that had a £17m budget, where we had a £60m uptake from the industry.

“Then, we have the analysis from outside, from the Public Accounts Committee, [which] is absolutely damning, calling it ‘blind optimism’ by Defra and the National Audit Office, chaired by Fiona Reynolds – not always a massive advocate of farming – but massively critical of the current situation.”

‘Not fit for purpose’

John Davies, president of NFU Cymru, said it would be “unacceptable” if the UK government allocates 30% of the ELM budget to 3% of landowners in England.

“That is not fit for purpose,” he said. “Never would so few have had so much for doing so little.”

North East farmer Richard Bramley, chairman of the NFU environment forum, said it was very clear the ELM budget would be “woefully short for what farmers are going to be asked to do in terms of management time, tasks and so on”.

Ali Capper, chairwoman of the NFU horticulture and potatoes board, and NFU organic forum chairman Andrew Burgess said neither of their sectors looked as if they would get recognition under the ELM scheme until at least 2025.

Last October, the NFU urged the UK government to delay Basic Payment Scheme reductions and “urgently review” its future farming programme for England amid a “perfect storm” of issues affecting the industry. But Defra says it has no plans to press pause.

Mr Eustice said: “The suggested profile of the budget was only ever indicative, and we said we’d keep it under review. We have been clear all along that we will spend money where it delivers for the environment alongside food production and we need to support changes across the entire farmed landscape to deliver our ambitions.

“That’s why we’ve increased Countryside Stewardship rates by an average of 30% and introduced the Sustainable Farming Incentive.”